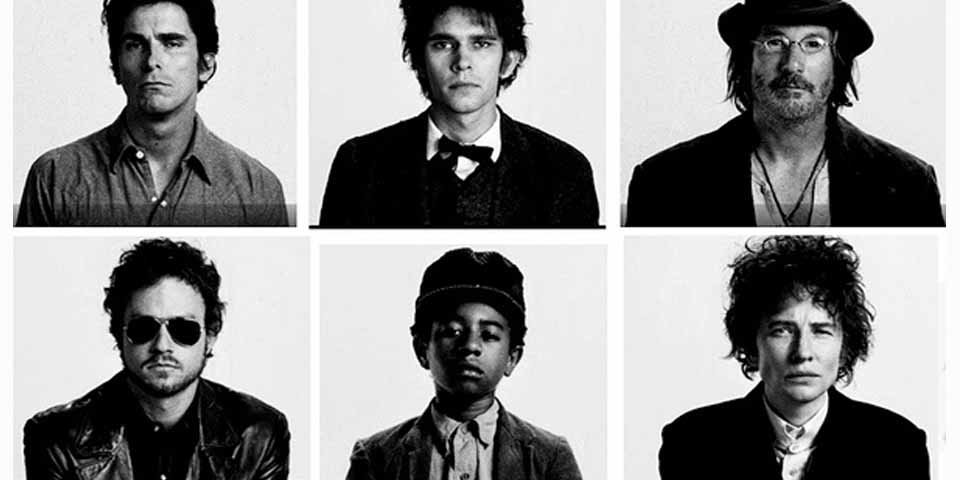 Why do you listen to Folk music, a youth is asked. “Because it’s honest. Unlike commercial Pop music, which is controlled and censored by the people who run society and make the rules”. Of the emerging Folk musicians back in those pioneering days, one name stands out. I’m Not There is a medley of six chapters from the life of one of the most outspoken and influential singer-songwriters of the century just gone by.

The screenplay is fuzzy and filled with allusions. To maintain non-uniformity, some real-life characters, such as Joan Baez, are represented by fictitious names, whereas some others, such as Allen Ginsberg, appear with their real names screamed out at intervals.

Dylan as a youth faking his way in life and idolizing his famous predecessor, Woody Guthrie, is shown by having an adolescent Guthrie meeting an aged Guthrie on his death bed. Dylan the anarchist poet muses, “I accept chaos. But I’m not sure whether it accepts me”.

Dylan the rebel is Billy the Kid. The infamous legend rides about the countryside like he’s in no hurry to go anywhere, and challenges a group of corporates who are out on an expansion drive. And finally you have Dylan disappointing everyone by entering the electric era.

Marcus Franklin plays the chords pretty easy for his age, but he’s a left hander unlike either Dylan or Guthrie. Making a switch from his tough, macho image, Christian Bale fidgets timidly. The versatile Heath Ledger displays a troubled mind.

With his ruffled hair and attire and grey, unshaven, beard, Richard Gere looks and acts exactly like his character from a psycho film, or, at best, a tramp on horseback. There’s no way at all that he resembles the legendary outlaw that he portrays.

And Cate Blanchett! Acting as a man, dressed up in a suit and a curly Dylan mop hairdo, she’s amazing. You’ll love the way Blanchett sways her hands in the air, her mannerisms, and her body language. You can see how completely immersed she is in the role of her rock star character.

The lighting and colors keep changing according to the cinematographer’s whims and fancies; when it’s not in black in white, the canvas is bathed in reds, blues, greenish yellows, or whatever hue comes in handy. Bits and pieces from the various actors are randomly assimilated. For added effect, there’s old TV footage of the civil rights movement and luminaries such as Martin Luther King Jn.

The music is a real treat. You get to hear a variety of Bob Dylan songs. On the downside, some of his popular anthems are missing, and, for some strange reason, a few non-Dylan songs are included. Todd Haynes has turned his brilliant, unconventional idea into a cult film. It’s highly psychedelic stuff. I reckon that many fans who are keen on checking it out would maybe want to first roll up and light a joint.