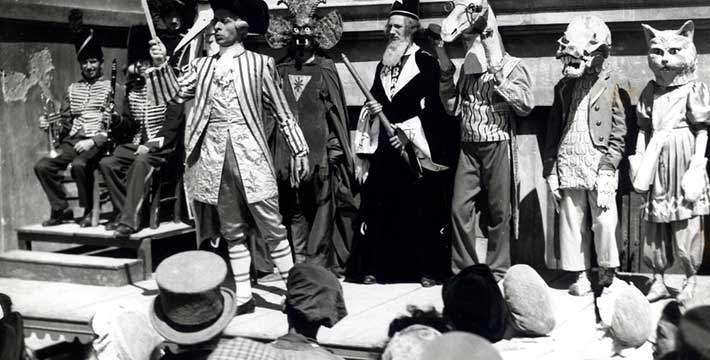 Widely regarded as the greatest film ever made, Marcel Carne’s Les Enfants Du Paradis (1945) is not as well known in India where that other contender for the ‘greatest film’ – Orson Welles’ Citizen Kane (1941) – still rules, except perhaps among Francophiles. Les Enfants Du Paradis is set among actors and performers but it is different from other films generally of the category. If a comparison is to be made, a film like Joseph Manciewicz’s All About Eve (1950) deals with Broadway stars and their doings but it draws a clear dividing line between ‘world’ and ‘stage’. The stage is merely the space in which their relationships and rivalries manifest themselves and not important in itself. Carne’s film is different in as much as it is a paean to the stage and tries to look at life through the prism of performance. The word ‘paradise’ in the title does not refer to heaven but to the topmost gallery in the theatre – with the lowest priced seats – occupied by the largest section of the audience – those with the loudest and most spontaneous responses.

Les Enfants Du Paradis is set in the theatrical world of Paris in the mid nineteenth century, centered on the area around the ‘Funambules’ theatre, situated on the ‘Boulevard du Crime’. The film revolves around a courtesan, Garance (Arletty). Four men — the mime Baptiste (Jean-Louis Barrault), the actor Frédérick Lemaître (Pierre Brasseur), the criminal Pierre François Lacenaire (Marcel Herrand), and the aristocrat Édouard de Montray (Louis Salou) — are in love with Garance, and their intrigues drive the story forward. Garance is briefly involved with them all, but leaves them when they attempt to force her to love on their terms, rather than her own. Les Enfants Du Paradis is divided into two parts – ‘Boulevard of Crime’ and ‘The Man in White’. The first begins around 1827, the second about seven years later. The action takes place mainly in the neighborhood of the Boulevard Du Crime in Paris, named thus for the melodramas and bloody scenarios offered to the largely plebian public each evening. There are two principal theaters there: the Funambules which specializes in pantomime, since the authorities do not allow it to use spoken dialogue, which is reserved for the Grand Theater.

In the first part of the film, Garance, who makes a living by exhibiting her physical charms in a carnival show, is in a crowd watching Babtiste dressed as Pierot, the white-faced clown when a man beside her accuses her of stealing his watch. When she is arrested, Babtiste – who has seen everything, mimes the entire episode and Garance is let off when she is declared innocent. While parting she throws a flower to Babtiste, who falls helplessly in love with her. Babtiste is almost childlike in his simplicity and Garance prefers taking up with the conceited actor Frédérick Lemaître although she also has an easy relationship with the criminal Lacenaire. When the shy Babtiste’s gifts are discovered, he becomes a star at the Funambules, where the owner’s daughter Nathalie (Maria Cassares) falls in love with him.  Also paying court to Garance is the Count de Montray, an aristocratic dandy. Although she initially rejects him, he offers help if she is ever in trouble and she takes it when she is accused unjustly of attempted robbery and murder in the concluding moments of The Boulevard of Crime.

Les Enfants Du Paradis was written by the poet Jacques Prevert and here are some lines from the film:

Frédérick Lemaître (an actor regretting having to mime): “I’m dying of silence, like others die of hunger and thirst.”

Baptiste: “Not only are you rich but you want to be loved as if you are poor.”

Count de Montray: “You’re much too lovely to be truly loved.”

Frédérick Lemaître: “Jealousy belongs to all – if a woman belongs to no one.”

The dialogue in the film sparkles but it is evidently of a different kind from that in the films of Billy Wider, Tarantino or Woody Allen. It is not repartee specific to the context of utterance but dialogue as literature. Without denigrating Carne’s contribution in any way, Les Enfants Du Paradis is conceived of as filmed literature rather than as cinema in itself. In the field of film criticism, this is generally considered a bad thing but words have an advantage over images – in their capacity for abstraction. They seem capable – without much effort – to reflect succinctly upon the human condition in a way that images are unable to. Where cinema often immerses us in life, as it were, literature at its greatest is essentially distant.

Carne’s later films were castigated by the French New Wave for being ‘artificial’ but the ‘artificiality’ of Les Enfants Du Paradis is a way of asserting that art is not life but something removed from it, distilled from its coils. While dealing with an intricate narrative, it makes no effort to make us participate in the fates of its protagonists – as individuals living for themselves. This is not to say that its characters are cardboard cutouts. The Count de Montray, for instance, is an expert marksman who picks quarrels over Garance for the pleasure of killing – in one-sided duels – those upon whom she bestows her attentions. What the film does, rather, is to arrange them before us as people whose fates are instructive in some way, perhaps illustrative of deeper truths. They are epic characters is this sense rather than persons with whom one might identify. It is in this context that the word ‘paradise’ in the title may actually mean more than the uppermost gallery in the theatre. If the gods in the epics watch over the fates of the characters, determining their rise and fall as they see fit, the plebian audiences in Les Enfants Du Paradis are perhaps in the analogous position of gods because they watch over the protagonists in the same way.