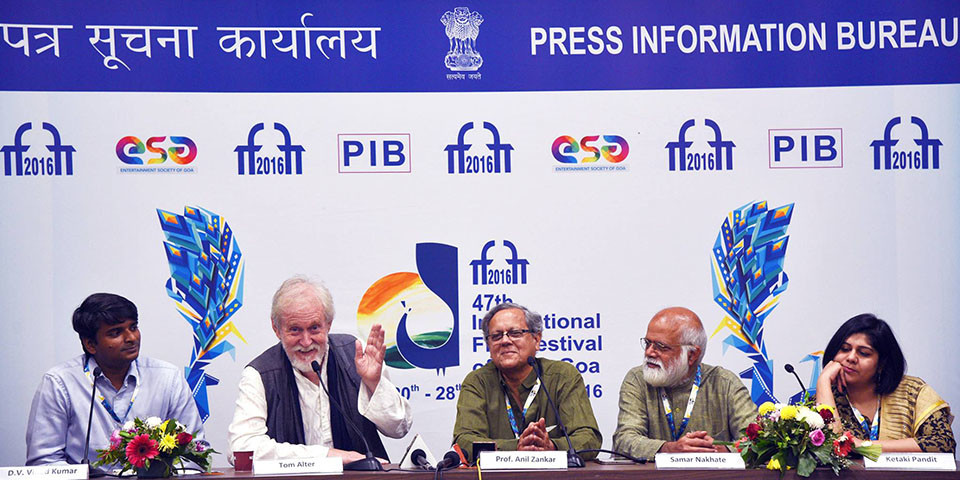 Film-labs are organized during many prestigious film festivals across the world for training people in the art of film making and this beautifully contributes in creating a vibrant fringe around any festival thereby providing a breathing space beyond the screenings. It takes nothing away, in fact it adds in spreading interest in Cinema and promoting film culture all around.

High-end master classes and special workshops conducted by internationally acclaimed personalities are not new to the International Film Festival of India but the 47th IFFI brought something new for the people who are new to the world of cinema. The Directorate of the Film Festival requested the renowned Film and Television Institute of India (FTII) to conduct short-term basic orientation courses in three disciplines i.e. Acting, Film-Appreciation and Screenplay Writing during the 47th International Film Festival of India in Goa. The FTII agreed and the experienced faculty of the Institute descended on Goa, away from their campus, to introduce aspiring film-makers and others interested in the art of cinema, to the essentials of cinema.

The Film Appreciation course was conducted by Prof. Anil Zankar and Prof. Samar Nakhate. Senior Professor of FTII, Anil Zankar told the media, “This is a basic exposure level course with heterogeneous participation from all parts of India and this makes this course very interesting. The course is participatory in nature in the sense that we make our presentations and participants are free to make their comments or ask questions. This is certainly not meant to be a one way communication exercise”. Some of the important topics covered during the course: specificity of cinema as a communication medium and as an art form, language of cinema: the basic technical and aesthetic concepts, mise-en-scene, early history and evolution of cinema: the silent era and sound era, the expressive range of cinema – short/feature, live action/animation, fiction/non-fiction, close analysis of a short film, the methodology of analyzing a film, film and reality. -fiction and nonfiction as two modes of reconstructing reality, social and economic nature of the film-medium and the scope of film studies. There were also specific discussions on feature films shown in the afternoons. “Art is not just for information. To really understand cinema, we need to understand the process of universal sharing of sensibilities of being human. There is a lot between zero and one-we just need to go beyond the two binaries involved in it”, said Prof. Nakhate.

The acting course was led by the renowned actor Tom Alter along with Siddhartha Shasta and Regin Bose. Some of the important subjects covered in the course were role of an actor in film making, difference between acting for films and theater, understanding “Method Acting”, body movement, improvisation and lip syncing. Shatrughan Sinha also joined the students for an interactive session. “It is amazing that the participants of the workshops have come without any ‘baggage’- they are enthusiastic and they are willing to open themselves up to criticism, to comments and they are willing to grow. We are not only teaching but learning too, There is no ‘guru’-we all are ‘shagird’ here. These workshops are a fantastic effort and I think they must continue”, said Honorary Prof. Tom Alter.

Screenplay Writing Workshop was conducted by Prof. Ketaki Pandit and Prof. Anjum Rajabali, and it was designed to give the participants an insight into the process of screenplay writing. Some of the important topics covered during the course were the importance of character, story, structure, scene design and dialogue. The course also outlined the difference between a short film and a feature, and also focused on the essentials of narrative storytelling. Participants were encouraged to bring their ideas for discussion in class, and were given writing exercises that helped them in developing their own stories. “Film is a temporal medium, one has to understand the importance of visual as well as the sound-there has to be awareness about stories and the understanding about construction of the narrative has to be developed”, said Prof. Ketaki Pandit.

These workshops were conducted as part of efforts to make IFFI ‘a learning experience rather than just a viewing exercise’. The whole concept of the FTII workshops was executed with precision and dedication.

While interacting with media , Shri. Ameya Abhyankar, CEO of Entertainment Society of Goa said “For any great film festival, it should have three elements – fantastic programming, a good market and knowledge exchange. FTII is the premier film institute in India and it has been the cradle of producing brilliant filmmakers in this country. I think this is a start of a broader engagement with FTII. These workshops have been well received. We look forward to consolidate the relationship with FTII from a festival-centric engagement to a yearlong engagement where we have courses running around the year.”

The efforts to make IFFI a world class film festival as well as an international level platform, for the Cinema lovers to watch quality films from all across the globe, interact with the masters of the craft and to enrich themselves with the knowledge about cinema as an artistic medium, have certainly been bearing fruits It is hoped that these efforts will take IFFI to new heights of excellence in the times to come.

Syed Mahmoud Nawaz is a senior journalist and filmmaker. He has done a variety of media assignments in the UK, Sweden, Denmark, Belgium, Luxembourg, Germany, France, Egypt, Jordan, Iran, Iraq, Syria, UAE, Maldives, Sri Lanka, Burma (Myanmar), Thailand, Pakistan, Bangladesh, Malaysia, Russia, and the US.  He has served as a Consultant for the UN Population Fund (UNFPA) in Maldives as well as for the Ministry of Information, Arts & Culture of the Republic of Maldives. He was also invited by the US Dept. of State under the International Visitors Leadership Program (IVLP) for a study project, ‘US Foreign Policy for Journalists’.