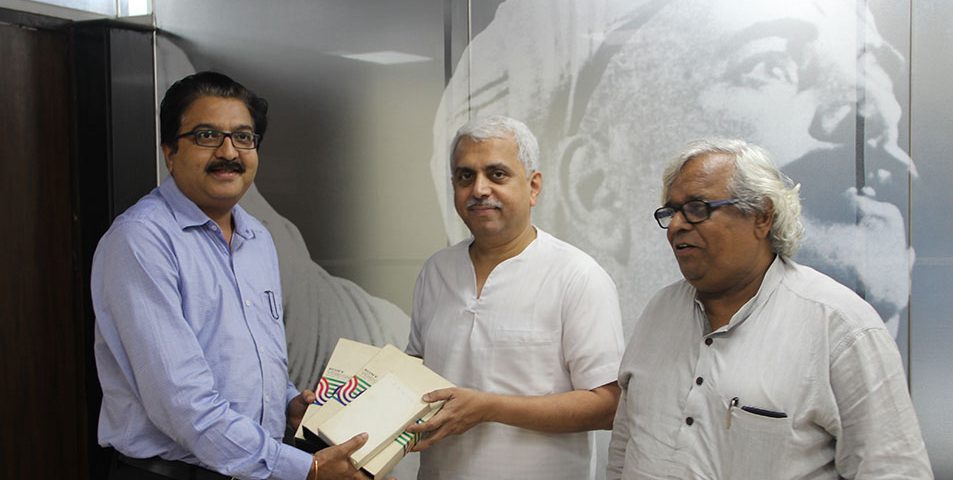 by NFAI News July 9, 2019
“Rare footage of an iconic Marathi film Vande Mataram (1948) in which legendary writer and playwright PL Deshpande played the lead role along with his wife Sunita Deshpande is now part of NFAI collection. A VHS cassette containing about 35 minute footage of the film is part of the collection that was donated to NFAI by Shri Dinesh Thakur, nephew of Sunita Deshpande and Shri Satish Jakatdar, film historian along with U-Matic tapes containing rare footage of Harmonium playing by PL Deshpande.

We are extremely delighted to receive this footage of a film that was considered to be lost. It is such a happy coincidence to discover this footage at a time when the birth centenary of PL Deshpande and Sudhir Phadke is being celebrated this year along with the producer of the film PR Bhide. The iconic Marathi film was directed by renowned director Ram Gabale.

Two U-matic cassettes of about one-hour duration contain the rare footage of playing of Harmonium by PL Deshpande in 1980’s.  One footage has Lalji Desai accompanying on Tabla who was part of the crew of Varyavarchi Varat, a very popular comedy play by PL Deshpande whereas the other contains Tabla by Jhavba. The footage was believed to be recorded in a private sitting in Mumbai in 1980’s. PL Deshpande was a proficient Harmonium player and had accompanied many stalwart Classical singers in several professional and private concerts. The other material donated contains PL Deshpande’s recitation of few of his very popular comic characters!

The film Vande Mataram is considered very important as the story was based on India’s freedom movement and had the script, dialogue and lyrics by renowned writer GD Madgulkar whereas the music was composed by stalwart composer Sudhir Phadke. The nationalist project was released only a year after independence and presented narratives woven with patriotism and humanist affection. Songs like Ved Mantrahun Vandya….became very popular and are remembered even today.

The screen test for the lead actors Sunita and PL Deshpande was done in Pune while shooting of the film took place in early 1948 at Shalini Studio in Kolhapur. Cameraman of the film Agashe had participated in the freedom struggle. This was the first screen test of PL Deshpande as an actor who went on to do several Marathi films as an actor, writer, composer and director.

The original hand-written script of another classic film Gulacha Ganpati had also been donated to NFAI three years back. The film, digitized by NFAI, was directed by PL Deshpande and he himself played the lead role, apart from writing the script and composing music for it!

We hope to find the remaining footage of the film and I appeal to all film lovers to come forward in donating or submitting the rare film footages and paper material such as posters, song booklets, photographs etc so that it can be preserved for future generations.”