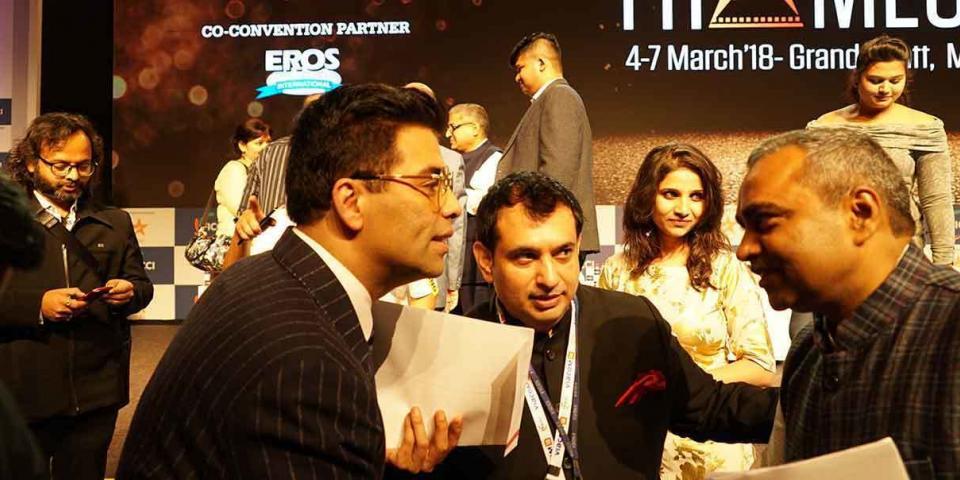 From March 4th to 7th, 2019, the Federation of Indian Chambers of Commerce and Industry (FICCI) organized their prestigious global convention FICCI FRAMES in Mumbai. The event focuses on almost the entire spectrum of the media and entertainment industry. It was attended by eminent delegates including industry stakeholders from many nations and government policymakers from India and abroad.

While inaugurating FICCI FRAMES, the Hon’ble Minister for Information and Broadcasting (MIB) Smriti Irani said that the Indian M&E industry is much more than just naach-gana (song and dance) and it was high time that the industry came forward to articulate the economic value and contribution that it gave to the Indian economy. She exhorted the industry to use modern data analytics and technology to arrive at conclusions at the type of content the consumer desired. She also emphasized that the answer to the challenges faced by the Indian Media & Entertainment industry lies in the concept of digital India.

Also speaking on the occasion on behalf of the industry, Star India Managing Director, Mr. Sanjay Gupta said, “These are truly exciting times for our industry. It is amongst the fastest growing sectors in the country. There is a revolution happening all around us, one that promises to, and in fact, has already started to redefine the future of media and entertainment.”

He further added that to compete well with the world, we need to set new standards of storytelling; we need to re-imagine our stories. We cannot allow our legacy to shape our creativity. With digital, we have the license to break away from all the trappings of traditional media. We need to challenge where we release our films first, in a theatre or on a mobile screen. We need to challenge the constraints of 8 pm prime time, daily and hourly news formats and 22-minute episode lengths.

There were many interesting sessions during the convention and one of them was the special session on “Enhancing Film Tourism”. The session was moderated by FICCI DSG Rahul Sharma, and on the panel were eminent film-maker Mr. Ramesh Sippy, Ms. Neela Lad from Ministry o Tourism, Government of India, Mr. Sanjay Pande from Rajasthan Tourism, Mr. Sudhir Sobti from Delhi Tourism and Ms. Khyati Nayak from Gujarat Tourism.

“Cinema is a great partner for Tourism” said Mr. Sippy. “The country needs more beautiful places for people to visit. Cinema is what’s madly followed in our country and people are easily intrigued by the places shown in any song or a film where it’s set. While filming Sholay, we tried to find a different location that looks similar to the ones manifested by the dacoits. So we went south and did find a place that was quite a sight for us.”

Delhi, Gujarat and Rajasthan showcased videos of the various beautiful places of their respective states as well as the clips of films shot previously on those locations, urging the film-makers to explore those places through their lenses.

All the panelists agreed that there is a natural link between cinema and tourism. So it is for us now to bring in everything else that’s necessary; hospitality, connectivity, flights, trains, buses etc. The government and tourism board in the respective place should co-operate with the same.

“We need to simplify the process of regulation; we need to facilitate the trade. Rajasthan is the first state to have a single people window. Now all you have to do is submit an online application to the director of tourism and he can get all the approvals for you from all the concerned persons,” said Mr. Sanjay Pande, Additional Director (P&D), Department of Tourism, Government of Rajasthan.

The Tourism department representatives from states and the representative from the Union Ministry of Tourism further added that even after the simplification of the process, if there’s still some rule or regulation that’s causing hindrance, the government will be more than happy to drive it out immediately.

Then there was another related session on the subject titled, “Contribution of Film Production to the tourism Economy of the Country” which also saw the head of Film Facilitation Office of the Ministry of I&B, Mr. Vikramjit Roy speaking on how to ease filming in India. He said we would not only be facilitating filming by foreign film-makers but will also be more than happy to work with the domestic film-makers.

The session on Censorship saw a heated debate and was also addressed by the legendary film-maker Mr. Shyam Benegal.

Many study reports including ‘Re-imaging India’s M&E sector’, ‘Film Tourism: The Mega Opportunity for Destinations’ and the ‘Incentive Guide to Indian Film Productions abroad’ were also released during FICCI FRAMES. And Best Animated Frames (BAF) Awards too were presented to deserving animation works in a gala ceremony held during the convention.

In all, FICCI FRAMES provided a great platform to everyone connected with the Media and Entertainment industry to interact, understand and dwell upon the challenges and opportunities which lie ahead for the industry.

Syed Mahmoud Nawaz is a senior journalist and filmmaker. He has done a variety of media assignments in the UK, Sweden, Denmark, Belgium, Luxembourg, Germany, France, Egypt, Jordan, Iran, Iraq, Syria, UAE, Maldives, Sri Lanka, Burma (Myanmar), Thailand, Pakistan, Bangladesh, Malaysia, Russia, and the US. He has served as a Consultant for the UN Population Fund (UNFPA) in Maldives as well as for the Ministry of Information, Arts & Culture of the Republic of Maldives. He was also invited by the US Dept. of State under the International Visitors Leadership Program (IVLP) for a study project, ‘US Foreign Policy for Journalists’.