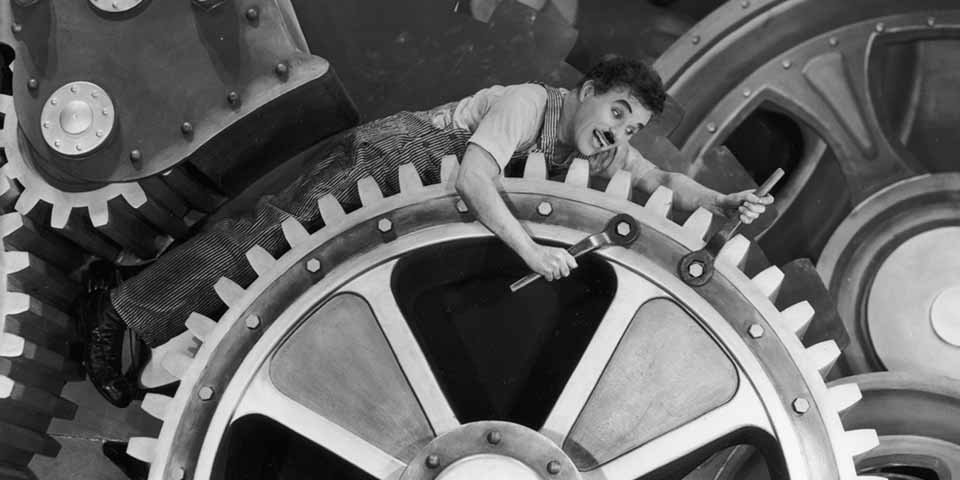 A clock with the seconds-needle soundlessly completes a circle and a half around it, setting the opening tone for Chaplin’s satirical “story of industry, of individual enterprise – humanity crusading in the pursuit of happiness”: Modern Times, inhabited in the Depression years by the famished populace, jobless or underpaid as a consequence of industrialization.

Immediately following is the image of a black sheep in the midst of white ones, all hurrying to get ahead. This merges into that of people rushing for work. Oddly, the sheep have no bearing to the film, and further, having made their point, do not bother to make another appearance. We must, of course, accept this as one of the many unformed techniques of the pioneering days of cinema.

Incessantly racing to keep up with the production pace, the slaving worker incapable of a pause must suppress the urge to brush off an insect buzzing in his face; while the slave master, determined to increase productivity, periodically speeds up the assembly line, and toys with the idea of introducing a machine to service the worker and by doing so eliminate the necessity of even a moment’s break.

After the simile and the passage on time, comes a metaphor of man literally caught up in the wheels-within-clogs-within-wheels of an overpowering machinery, enough to drive the individual directly nuts and indirectly to deeds of crime. Discharging the tramp from the loony house, the doc cautions him to stay away from excitement. But outside, the world spins psychedelically on an odd axis.

Eerie as a premonition, Chaplin, attempting to be helpful, waves a red flag, and is immediately accused of being a communist. His sympathy for the have-nots in this reel, however, is in stark contrast to his non-altruistic attitude in the real. It is, therefore, ironical that the once-ragged-starving tramp would in his rich years be witch-hunted by an equally dreadful sort of machinery for a virtue that he never possessed.

The next act opens with a temporary escape into fantasy, the essential stimulant for survival, and offers a real taste of riches, and a modified dump as a make-believe home. Seated on the grass, with a whiff of romance in the air, the tramp asks a happy-go-lucky orphan girl, “Where do you live?” “No place—anywhere”, she smiles. They watch a couple in a rich house. And the tramp says, “Can you imagine us in a little home like that?”

The common man’s desire is exemplified by Chaplin’s lovable little tramp: wrapped in rags, but exuding the mannerisms and attitude of the upper class; hungry and homeless, but ever full of hope. For, even outcasts deserve a secure place to belong to, and proper clothes, and food. They certainly have the freedom to momentarily forget their pangs and to experience and dream of a slice of the great American Dream.

The unreal, sadly, is short lived. The woman of the streets wakes in a luxurious bed, realizing that she has overstayed, and as she flees, a vertical wipe, marking her transition, comes crashing down heavily like a curtain over her dreams. Modern Times

The importance of determination, positivity, and employment is emphasized, in the concluding section, with the image of the tramp rushing like an arrow through a dense forest of people, right up to and inside the gate of a newly-opened factory. Chaplin, it must be mentioned here, was of the firm belief that the solution to industrialization lay in the creation of mass job opportunities.

Contrarily, rather than attempting to maintain their employment status, the workers force a strike even before the rusted machinery can fully be oiled and repaired, and the keepers of the law would rather uselessly lock up a past offender than allow them the chance to a decent job. Faced with a bleak future, the question is asked: Is there any use in trying? Yes, the tramp affirms sans an instant of hesitation, “Smile. Never say die”.

While the hallmark of Chaplin’s genius is everywhere evident, from the canvas and musical compositions to the sound and special effects, some amount of praise must be reserved for his technical team too as much for aiding in the precision in setting and timing of the magic as for their endurance.

One is occasionally compelled to ponder over the intention of such master strokes, designed of a meticulous penchant, as the opening image with its ten long seconds of frozen time.

Passionate for the perfect shot, Chaplin was known to waste a substantial amount of footage,[¹] shooting frequently at an astronomical ratio. Of course, the quantity of takes could quite easily have been dramatically reduced had important scenes been simply chopped up into fragments. But it wasn’t his style. Modern Times

Chaplin, essentially the stage performer, preferred to master whatever trick he was to perform rather than to completely allow the magic of cinema to perform it. And having mastered his trick, he wanted nothing less than for his audience to see the brilliance of his performance believably. Reality—as demonstrated in a seemingly-precarious roller skating scene—however, is not beyond manipulation, and in the hands of the clever master, Chaplin the filmmaker, even the long take deceives, totally. Modern Times

The talkies by the time of the making of this film were around a decade old. But Chaplin had no intention of allowing his tramp to speak a language fearing that he would lose his “universal appeal”[²] if heard by audiences. He does, however, in addition to creating a gag around sound and throwing audible dialogues from within machines, finally, give a voice to his timeless character.

Dancing to a live band before a roaring audience, the tramp forgets his lines. “Sing!! Never mind the words”, he is prompted. Thus, boxing the teeth off the talkies, Charlie makes a grand sound debut mouthing utter “gibberish”[³]. Expectedly, thundering applause and a wonderful new chance at stardom ensues. But Chaplin believes it’s time to leave. Having bid his adieu,[³] he grabs his hat and cane, and putting on a brave smile, he moves on into the dawn.