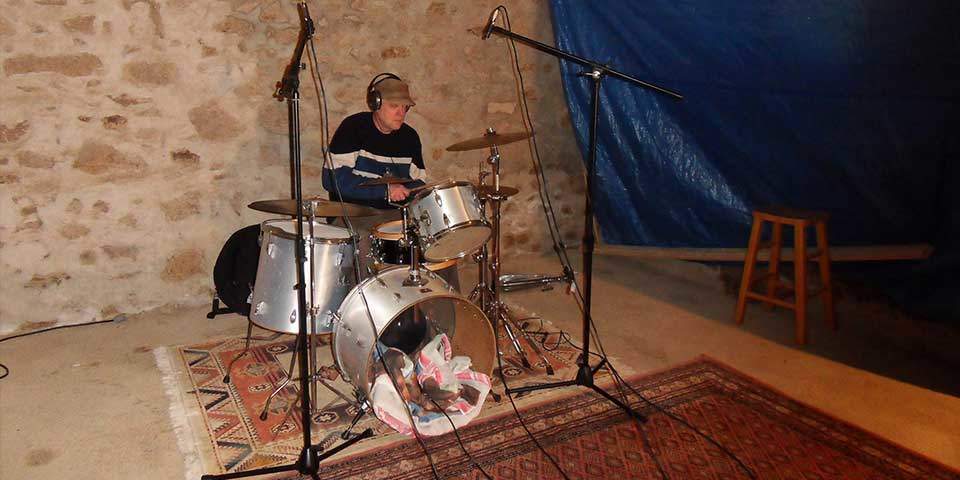 The next step in my home recording journey came with some Magix software (Samplitude)…Magix have grown over the years, back then their stuff was simpler and cheaper and I learnt how to engineer and produce from it.

I thus decided to record my acoustic drums with the beloved Ludwig Black Beauty snare (which subsequently got stolen along with the rest of my kit). Having TWO mics on a drum kit (two vocal mics too) isn’t ideal…but…the results weren’t that bad! Have a listen here: 1 and 2.

It was all a bit hit and miss and when layering ALL the instruments on top (with some guest appearances) the foundation – again – was weak for the most part. The next album I did simply teetered and fell. It was only when I inherited some money and was able to buy an electronic kit that recording the drums developed further. The kit was fairly basic, but a good early model of Roland (TD6). I had NO knowledge of ‘midi’ at this point and thus I used the kit sounds pre-programmed into the drums – and to be fair the TD6 has a great range. The whole sound of my recordings improved – though the drum sound was a little weak and thin. But I was learning and improving.

With what I now consider to be my last amateur album, I was feeling confident. I had someone pushing the CD and was getting some ‘radio play’ (though only internet radio). I also had a publisher for a couple of songs and got PRS status (Performing Right Society) following some airplay for one of these along with a solo performance (guitar/vox) on the BBC. It was all looking up. And with some okay reviews for this album – though not incredible – I felt more-or-less ‘on track’.

And then – having just moved to France – I got a REAL stinker of a review! And it was a nasty personal attack too. It felt (and others who read agreed) that the review was malicious. But there was nothing I could do about it. I was stuck with it on the internet for all to see. Now sometimes good comes out of bad (every cloud having a silver-lining) and a friend who read this review and felt it somewhat unjust gave me a whole lot of recording software! Very generous. Not only that but I acquired some midi software for the Roland electronic kit. (This was after many, many hours trying to work out how midi works! It’s not difficult but whatever you are taking the midi from needs to trigger software in the computer! Yes seems obvious NOW!)

Suddenly my drums sounded like REAL DRUMS. I could also see exactly where the beat fell and how ‘tight’ it all was. I could manipulate beats too if necessary. I could, finally, lay down a VERY solid foundation and build from there. And I did.
With the right equipment and plug-ins I could REALLY tell the difference. I was also given a set of ‘flat-response’ headphones. Let me own up to one more horrific fact about my early recording: when I began I used my wife’s twenty-plus year old cassette recorder (a ‘ghetto-blaster’) to monitor! Also I had a pair of old headphones my dad had used…I didn’t realise at the time just how terrible they were. It was all hopeless in fact – though I was blissfully unaware. I must also say that at this stage I was beginning to get some help from some professional studio chaps too…(I was doing some session work, including bass!).

With my ‘new’ – though old – headphones I could HEAR…and I could hear without bias to treble or bass. It was as if the music had come alive. A friend had helped me get a great set of speakers too…I told you this was a long journey I was making! Now I could record so much better and was really getting to understand the whole wide-ranging process.

Though I think it imperfect now and only JUST professional Revamped 1, my first proper home-produced album, got some good reviews. And from this album released in 2011 I have again upped my game and got better equipment and more and more technical knowledge.

Being in France I was able to call on local musicians as well as those across the ‘ether’ to help me with Revamped Too. This album stands the test of time for me…and so it was onto Revamped 3 (which contains a song that won an award). Reviews were good…good players on the album – though at times I was still playing all the instruments. With the internet I could educate myself further.

Times were good. But the journey didn’t stop there. And we still haven’t hopped on the ‘bus/buss’. So you’ll have to wait around for Part Three! See you then.

If you want to have more idea of the drum-kit and its components please do check out drum page on youtube. And feel free to ask any questions.

Tim Bragg, an Englishman living in France (married to a French woman), is a writer-musician, and the founder of two prominent organisations—the (now-ceased) cultural publication, ‘Steadfast’, and the environmental campaign group, ‘English Green’. He is the author-editor of a number of books. And a singer-songwriter who plays a variety of musical instruments. He is also the recipient of an Akademia Award for Best Rock/R&B Song. You can find his drum videos here.