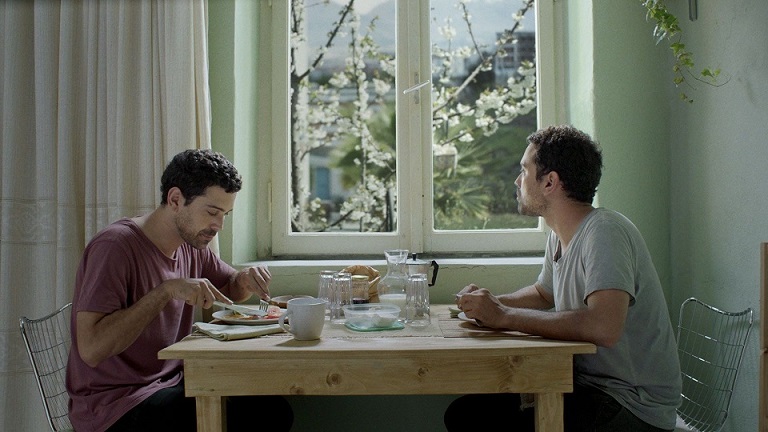 With its world premiere at the Tallinn Black Nights Film Festival, A Cup Of Coffee And New Shoes On starts off as an idyllic, slice of life movie with hints of dark humor as it follows deaf Albanian twins Agim and Gezim living a simple life, playing cards with their friends, running a wood workshop and mushroom picking. Little do the viewers know that they will be bawling their eyes out before the film even ends as a life-threatening incident has Agim getting his eyes checked only to be told that he has an incurable disease which will lead to him losing his eyesight for good. If that isn’t enough, Gezim too will suffer from the same disease due to the sharing the same DNA as his brother. But no, the film is not about hope or finding a cure as they race against time, but uses nihilistic elements as Agim resolves to his fate while Gezim hopes to survive and live his life as much as he can with his twin brother.

Despite leaning towards the genre of melodrama, which may not be everyone’s cup of tea, or coffee in this case, even a normal movie goer cannot help but marvel at the cinematic experience that A Cup Of Coffee And New Shoes On is. Working on the humorous title and humorous opening where one of the brothers drops his cup off coffee but doesn’t hear it breaking, the script takes us on a masterclass of red herrings and an emotional rollercoaster as every time the viewer tries to predict what is going to happen next, director and screenwriter Gentian Koci does a massive u-turn while making our tear glands work overtime. And while Koci revels as the grand puppeteer, tugging at our heart strings, the final blow is the ending which gives the title a whole new meaning as viewers wish that it is not what they know it to be.

The film also immerses us completely in the world of the twins from taking us through Agim’s soundless and visionless point of views to the dedication of the Morais brothers from Portugal learning Albanian sign language to do justice to their characters who not only speak a different language but also are deaf and blind. They do their bit as well in fleshing out the characters from physical markers like tattoos to taking the role of the older and younger twin. Agim goes from the protective older brother who takes care of his younger twin and Gezim’s girlfriend to a wreck who gives up on life. He’s a grey character who thinks he is sparing his loved ones by keeping secrets but hurting them by pushing them away. Gezim, on the other hand is the naive and innocent younger twin who is optimistic and full of life but ends up taking the role of the protector as both of them start losing their vision.

However, the editing could be crisper as we spend too much time on certain scenes to drive the point home like the eye examination. But the Morais brothers do so well that we can already feel the panic of Agim losing the most important sense he relies on that there is no need to prolong it. We then have a long shot of Agim in the dark, walking in the workshop to experience being blind which is in theory a good idea. But since the audience can’t see, can’t feel, they can’t get worried for him like when he saws a piece of wood with his eyes closed while the camera rests on his anxious face. A Cup Of Coffee And New Shoes On could do well to move on with the plot as the audience is already hooked, wanting to know more.

But from the scenic nature which reflects the twins’s initially happy life to the dull and dreary apartment that starts closing in on them as they lose their sight, everything adds to complement the plot. There are no unnecessary sounds whether it is from the viewer’s POV to the twins’, never allowing us to forget that despite their impairment, they are also human beings like us and can live life to the fullest if they wish it. As Albania’s Oscar entry, A Cup Of Coffee And New Shoes On is a story of life and the challenges it throws at us, leaving it up to us to deal with it the way we think is the best, whether it is destructive or positive.

A Cup Of Coffee And New Shoes on IMDB

Which film will win the coveted Golden Peacock at IFFI 53?