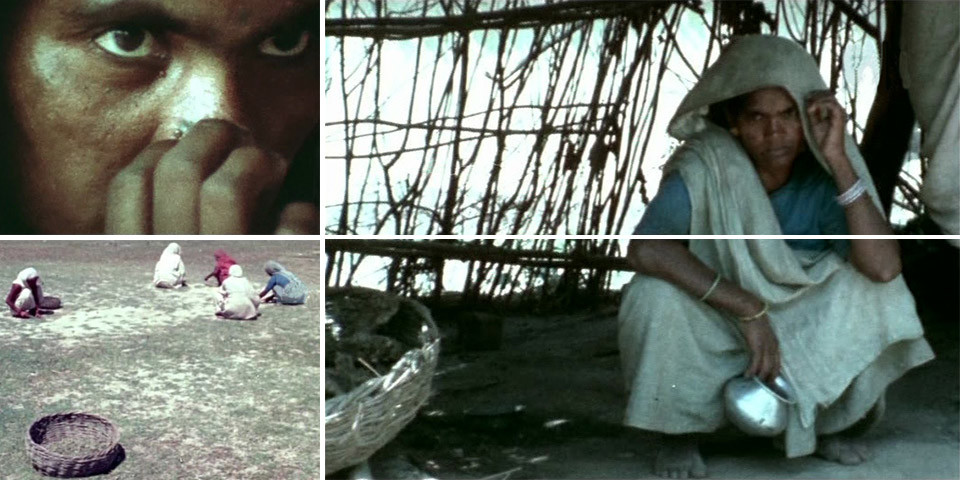 Narrative cinema, in its most austere form, comprises of images and sounds moulded by the director to satisfy a figurative representation. The director envisions and executes a form through his intention that translates a loose narrative into sensorial images and sounds. In the following paper I will be exploring her film taking ideas developed from Gilles Deleuze’s books on cinema: The Movement-Image and The Time-Image[1].

Within the confines of this logic, Nina Sugati’s Chattrabhang attempts to transform a representation of a social reality i.e. caste in India, into a form of cinematized intensity: an intensity that transfers the authors interiority onto the film, which the spectator then matches to his or hers.

Caste, the subject for the film in itself, is a hierarchy: a splitting of a whole into superior and inferior. On the other hand film comprises, as philosopher Gilles Deleuze points out, of any-instant-whatevers[2], where each image is as important as the next doing away with the idea of hierarchy. The challenge for Sugati here, is to transform the privileged pose that is caste and transform it to a medium that is innately philosophical and produce a larger philosophical objective from which the sociological issue can form the milieu.

Sugati’s practice centers on imageography, the process of transforming the image into a geographic whole: that territoriality forms the basis of the exchange of elements of the cinematic assemblage: images and sounds. These images and sounds, in Chattrabhang, form a continuous presentation such that voice, sound effect, camera movement and change in lighting are integrated into a continuous whole. Sugati’s approach to truth, which she believes is anywhere and everywhere once again syncs with cinema’s any-instant-whatever tendency i.e. the philosophy of the author must be conducive to the cinema produced producing what Clement Greenberg may have pronounced a cinema of medium-specificity[3].

The film is primarily about a transformation of an object whilst this object is simultaneously being destroyed. In this sense its concerns are Cubist and its philosophy modernist. It is an exploration of the possibilities of cinema, whereas its subject is just a means of exploring this. The object is first balanced and then unbalanced[4] (the opening shot of the rock tilting), then transformed in time (the repetitive shot of the tree) and then destroyed (the last shot where the rocks in the quarry are all pebbles).

Within the context of classical film theory, the film completely follows the auteur school of cinema, giving the film director complete credit for the film and equating film with writing. For Sugati, the “writing with images and sounds”[5], is forwarded with the objective of freeing up the transforming object from its milieu, in the same way, as she wants the characters to be free of caste. In other words the objective of the content is the same as the objective of the film-making approach. Sugati would always mention how the film emerged from the material, namely a five page script, instead of Hollywood’s approach of the fully planned script. In this sense, the content of the film matches the means through it was made, an aesthetic of construction and deconstruction in circles[6], as the film unveils, that would be perfected in the films of Abbas Kiarostami.

The film, made in 1975, shares some of the concerns of the simultaneously occurring Indian New Wave comprising of its leading lights Mani Kaul and Kumar Shahani. Whereas Kaul and Shahani were closer to an opaque constructed image, Sugati attempts to create a cinema of on-the-spot choreography that follows the footsteps of some of her cinematic references. The film however, does share formal concerns with the films of the New Wave, especially those of Mani Kaul. The use of desaturated colors, successfully communicating a zero intensity state[7], coincides with their use in Kaul’s Duvidha as does the use of freeze frames. Most importantly both Kaul’s films and Chattrabhang, use the Sanskrit metre or chhanda in very similar ways.

Channda, in Deleuzean terms, can be defined as the relationship between the part (of the Whole) and the interval. It is most simply defined by a pre-emption and delay (of utterances) that produce tension and eventually rhythm. Both Sugati and Kaul are known to direct their actors by asking them to utter the same line with different pauses to produce different affective states.

To match chhanda to the form of the film, Sugati uses the medium of poetry. Whereas the content of the poems is the alternatively static and mobile nature of Indian society, the recitation of the poem explicitly gives form of a pure chhanda. The chhanda of the poetry serves as musical tonic to the chhanda of the voice over and the characters, which serve as counterpoints to the motif of the voice. This voice in itself is neutral, almost like a radio voice, to contrast itself to the voices of the interviewed Brahmin priests and dalit characters.

The image, its content and link to the next image arise from these different chhandas in contrast. Sugati pronounces cinema to be a language (as opposed to Deleuze who defines it more as rarefied or concentrated information[8]) and her visual vocabulary arises from these scales, which she has carefully set up.

The film is not about representation but affect. To achieve this affect, it tries to construct and reconstruct the close-up of a face (Deleuze would pronounce this affection-image[9]). There are two faces here: the first the face of the characters which serve as the motif, and their counterpoint: the landscape as a face which nullifies this face, as the two faces continuously transform one another. Thus, there are two sides to the transformed object: on the one hand it is thought projected onto the part (of the Whole) (i.e. thinking itself into existence), whilst on the other hand it is an emotional response to the interval, thus relinking the part to the interval and reaffirming the importance of chhanda.

Chattrabhang works by successfully exploring the schizophrenic relationship between location and narrative space. In this case the narrative space is dissolved to realize the 0 degree location-space: the pure interiority. This element of construction is reduced until the spectator encounters newspaper clippings and voice over on the radio, actual documents from the reality outside that of the film.

Sugati obsessively frames, as she points out, emphasizing the edges perhaps to create a tension with what lies outside the frame. Her images often frame at an unusual high angle with a telephoto lens as if to destroy perspective and re-align the film to the modernist concerns best represented by the Cubist movement. The use of a-synchronic electronic sounds, is reminiscent of Tarkovski’s use of such sounds as they lie firmly outside the genre the film is attempting to construct and instead produce a purified sound, much like cinema itself attempts to produce a purified image[10].

As Deleuze points out, cinema is virtual-real and not actual. For him, this virtual is a construction of a crystal of time, with its different faces appearing in the construction of a single shot. The ‘virtuality’ of time is forwarded through tension. Tension in itself is the rope being tightened, similar to what yoga does to the body and Indian classical music does to the succession of notes.

In classical cinema, Hitchcock denotes this tension directly in the plot of the film. On the other hand, Eisenstein constructs the tension in the concatenation of shots through editing whereas Bresson contrasts the frame with the soundtrack.

Godard, on the other hand, much like Kiarostami later, prevents the tension from building up through distractions that emphasize the reality of the false construct.

Sugati takes a more symbolic approach to tension linking it to the image-sound sensorium through the shot of the rope. The sequence with the repeated close-up of the rope being pulled to draw water from the Brahmin well denotes the sensorial collapse where the image-sound combination open up a state of pure energy. Whereas Hollywood construct a material collapse through explosions, classical Japanese cinema emphasizes the same through the destruction of the carefully designed set. For Sugati, the image-sound combination itself is material enough to be destroyed without the presence of the denotational[11] aspect of this materiality within the frame.

The use of conventional film genres in the film is extremely covert if at all. However, a post-modern reading would require us to move beyond the intention of the director and observe aspects from conventional films which are then purified to produce this 0 intensity cinema. Most noticeable is the use of documentary locations and voice-over giving it the feel of a docu-drama. More curious is the use of crime genre elements represented by the police present at conventionally dramatic locations like the police station and in the police van. The use of the close-up to denote the Brahmin priests inviting the police to arrest the harijans, suddenly introduces an element of pure movement, almost silent cinema like, except with the soundtrack.

In conclusion, Chattrabhang is able to successfully create a new approach to cinema in which an exploration instead of an execution is possible. The film successfully creates a continuous assemblage of images, sounds, camera movements and dialogue creating a same intensity, which Gilles Deleuze, alongside psychoanalyst Felix Guattari, may have pronounced a Buddhist Body without Organs (BwO). It translates surficial representation into interior intensity at a level equivalent to that of Yasujiro Ozu’s films, whilst yet being able to engage the state of affairs of the outside world as represented by contemporary Indian society at the time and its most burning issue: caste.

[1] Cinema 1: The Movement Image and Cinema 2: The Time Image, Gilles Deleuze, Editions De Minuit, 1983; translated into English by Hugh Tomlinson, 1986. Deleuze’s books which use the philosophy of Henri Bergson to present an exposition on cinema.

[4] “Unbalance so as to rebalance”, quote in Notes on the Cinematographer, Robert Bresson, Green Integer Books, Page 44

[5] Bresson, Green Integer, Page 16. Robert Bresson defines cinematography, as opposed to “filmed theatre” as a “writing with images and sounds.”

[9] For Deleuze the prime example of the affection-image is the close-up as it transforms the represented scene into a shock effect by taking the camera close to the actor’s face. For Deleuze the classic example of this technique is Carl Dreyer’s The Passion of Joan of Arc (1928)

[10]Alain Badiou, ‘Philosophy and Cinema’, in Infinite Thought: Truth and the Return to Philosophy, ed. and trans. Oliver Feltham and Justin Clemens, Continuum, 2004, p. 111.Alain Badiou defines cinema as a “process of purification of its own immanent non-artistic character”

[11] Mani Kaul refers to Anandwardhan’s 8th century text Dhwanyaloka, which propagates aesthetics of suggestion, specifically by viewing language outside of its significative, denotational and metaphorical dimensions. To challenge Hollywood, the Indian New Wave film makers attempt to make the shot into a volume instead of denoting the event

Devdutt Trivedi is a cinephile who lectures on classical film theory and works at Osian’s. His research indicates an interest in combining philosophical concepts with film praxis.