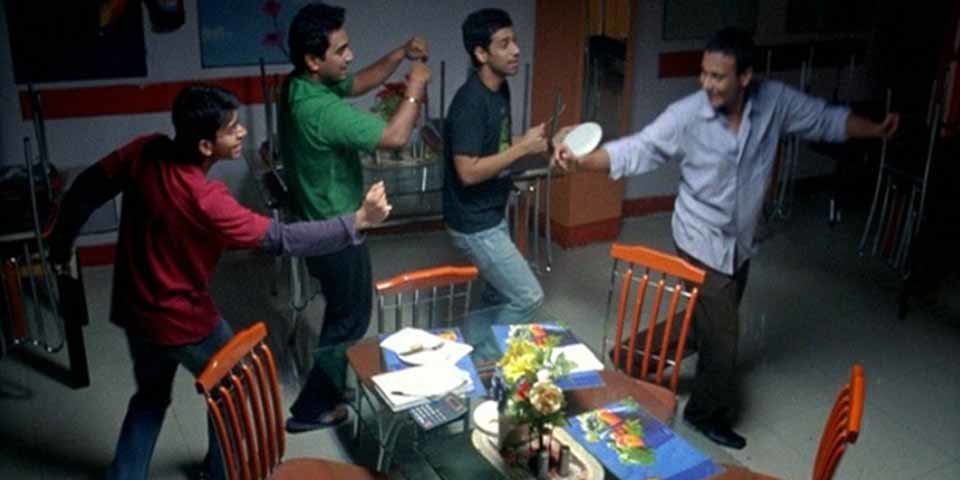 Hemant Gaba’s Shuttlecock Boys revolves around the lives, successes and failures of four friends who hail from lower middle class backgrounds in Delhi. Should we accept what life offers to us on a platter or should we try to chase our dreams, taking the path less taken? That’s the question the protagonists Gaurav, Manav, Pankaj and Loveleen seek answer to, as they decide to embark upon an eventful journey that will change the course of their lives and careers forever. The one thing that unites these four friends is their common love for badminton. Every evening they meet for a couple of games in their neighbourhood joking about their lives and pulling each other’s legs. This part of the day is the most pleasant part of their otherwise dreary lives. While playing badminton one such night, they decide to do something on their own. This very attempt becomes their lifeline putting them on a litmus test of determination, courage, luck and spirit of friendship.

Excerpt of an interview with the director, Hemant Kumar Gaba

Shuttlecock Boys seems to be a movie that’s about pursuing one’s true calling. Movies such as 3 Idiots, Udaan, even Taare Zameen Par (to an extent) were on similar themes. Do you think this would make Shuttlecock Boys thematically trite?

The subject we chose for Shuttlecock Boys is based on our real life experiences. Today, people with high paying jobs are moving towards entrepreneurship to pursue their dreams. That’s an emotion we have tried to capture in the film. And considering the budget of 35 lacs with non-actors and realistically shot in parts of West Delhi where even today we see people playing badminton in their neighbourhoods. Every aspect of the film revolves around middle class who conventionally had to choose between traditional jobs due to family constraints instead of following their passion. Also, the way the film has been shot will connect with a common man to a larger extent minus the larger than life portrayal of a character. The middle class of India has always taught their children to stick to secure jobs and not take any risks. I wanted to create an experience of the energy and vulnerability of the youth who want to take the less travelled road in making their career choices. The kind of friendship the four protagonists share in Shuttlecock Boys also comes from my own growing up years

The journey of the characters in the movie in some way resembles your journey too—of refusing to settle down and doing something what one believes in. How autobiographical is the movie?

I wrote a story about 4 boys from Delhi’s middle class who aspire to be entrepreneurs. After being stuck in 9 to 6 monotonous jobs myself for a few years, I realized that lot of people including myself, actually want to do something on their own in our lives instead of being succumbed to the slavery of a job in a corporate house. But it is very tough to muster the courage to follow the heart that leads to the road to uncertainty.

Truly, the film does have a reflection of my life and Pankaj who is the producer of the film. But I would refrain from classifying it as an autobiography. It would be wrong to say so because I am still to grow old and make an autobiographical film. I feel it’s the story of every person who would want to chase a dream not caricatured by someone else. The theme is extremely motivational to take that first required step and start thinking. Pragmatically, there’s a reasoning why one should take risks in life and head for the bigger challenge.

How was the filmmaking process? Which camera did you use? And how much time it did take to complete the movie?

A typical day would start from making wake up calls to the crew so that everyone reaches on location in time. On the location, it would be rehearsals during the lighting of the location. And then canning the shots, all this would take place with some or the other unexpected turn of events. While shooting outdoors, we didn’t have any formal permission, so we would have one vehicle on each side around 500 meters away to signal us if we anticipate any element that could disrupt the shoot.

Production is a herculean task in every Indie Film. We were thrown out from a Park on very first day of the shoot by the police even when we had permission from them. Shooting on 18 locations in just 22 days with a crew of 30 people was the major hurdle. The challenge was managing time because time was essentially money which we didn’t have. We kept our focus on performances of the lead characters instead of investing time in creating good looking visuals. We shot the film on Super 16mm camera keeping a close eye on the raw stock that was getting used. 10 minutes of raw stock cost us some 5,000/-. So we tried to show the maximum with minimum number of shots. Also, we used sync sound over dubbing in order to have organic performances. For lights, we used very few hired lights and mostly used inexpensive Chinese Lanterns.

During our post production stage, a leading post-production lab ruined all the film negatives during handling. I would add here that it was probably a human error while handling our film’s negatives. The sad part was that the lab head in Mumbai didn’t acknowledge this blunder and instead asked me pay up 2 lakh rupees to fix only few portions of it. After six months of constant negotiation and arguments, I wrote to the owners of the lab who agreed to the problem and later digitally restored the film in three months.

It took us two and half years to complete the film and another year and a half to have it theatrically released.

Many Indie movies are beset with roadblocks. What were some of the roadblocks that you faced?

Indeed, there were numerous roadblocks through and through the making of this film. The biggest roadblock was the funding of this movie. Mostly through personal savings and loans from friends/family, we embarked on the journey of making our debut feature film which is synonymous to the protagonist’s journey in the film. Some of the other challenges we faced while making of this movie was choosing the actors, equipment hiring, shooting at locations without permissions, post-production and finally approaching numerous people to have it released.

Firstly, the lead characters were most important for us. But we knew we won’t be able to afford any known faces. So we went on an audition spree eventually taking up more than 200 auditions for four lead characters in both Delhi & Mumbai. Scouting for locations was a task however for the home locations; we decided to use some of our friends & relatives’ homes. For scenes to be shot in an office we sent more than 500 cold emails and then some 7-8 companies invited us for a meeting. Two of them ended up giving us locations against film credits.

Another big issue was during the post-production stage. There aren’t any post production labs in Delhi and also we didn’t find any sound technicians to handle the post production. So we moved to Mumbai for the POST. After offline edit & sound design; next step was to go to the lab again where our film negatives got screwed by the film lab editors. This is was a huge blow for us. It took us 9-10 months to fight with the lab and get our film digitally restored.

After the film completion, we didn’t know how to go about showcasing it. We were naïve, so didn’t know how film festival circuit functions. We started approaching film distributors. We figured that the entire struggle to make the film was nothing. There is a saying in the film industry that it’s easier to make a film but very difficult to release it in theatres which is indeed true. A celebrity endorsement or deep pockets do help but we didn’t have either. So we became like door to door salesmen, went to every film corporate and film distributor. In the meantime, we got various opportunities to showcase the film in film festivals in India & US. The response to the film gave us confidence to keep pursing for a theatrical release. And it took us 1.5 years after film completion to get this theatrical release that is scheduled on 3rd August.

It’s been quite a journey for you. How do you reflect on it? What are some of the things you wished you could have done differently?

Well, I see it as it was meant to happen. We knew from the beginning that it is going to be a tough road, although we were not ready for this much toughnessJ. .. But time taught us; it’s been a huge learning experience not only in terms of a whole life cycle of filmmaking but more than that personal growth. Making an independent film taught us a lot about life itself.

Production is a herculean task in every Indie Film

What do you think about the Independent Cinema in India? Who, according to you, are some of the more interesting independent film-makers in the country?

Onir is interesting because he has stayed away from studios and has continued making his kind of films from the finances raised either through social networks or from equity investors. Dibakar and Anurag have made their in-roads into studios but still making their kind of films.

PVR Director’s Rare is a blessing to every independent film-maker in our country. It has given a platform which puts a small budget film right next to a multi-starrer, 100 crore movie at the box office. No doubt, it’s the most effective showcase of the hard work gone in by us to put a film together. On the contrary, I feel there’s a dire need of more such platforms dedicated to independent film makers because on the budget that we operate on, the film cannot be marketed effectively across India. This restricts the reach in addition to ticket prices being the same as of a mainstream release.

Finally, there are many people out there, who are closeted film-makers, but are stuck in a dreary day job. You were once stuck in a day job too. What would you like to say to them?

Everyone knows the facts of their lives. Of course, a big bunch of us prefer cushion instead of facing the difficulties that these roads offer. But my only question to them would be – “How long are you going to be dead? (Sad we don’t even know how long and even if we assume an average life span; half of it is already over if you are 30 plus.)” Last four years have taught me a lot; and I am willing to support & share experiences with like minded people but of course they will have to take that plunge, they will have to dive into these unstable waters.

Factual ERRORS in ‘The Oxford History of World Cinema’

Tanul Thakur is a National-Award-winning film critic. He used to write for The Sunday Guardian and The Big Indian Picture.