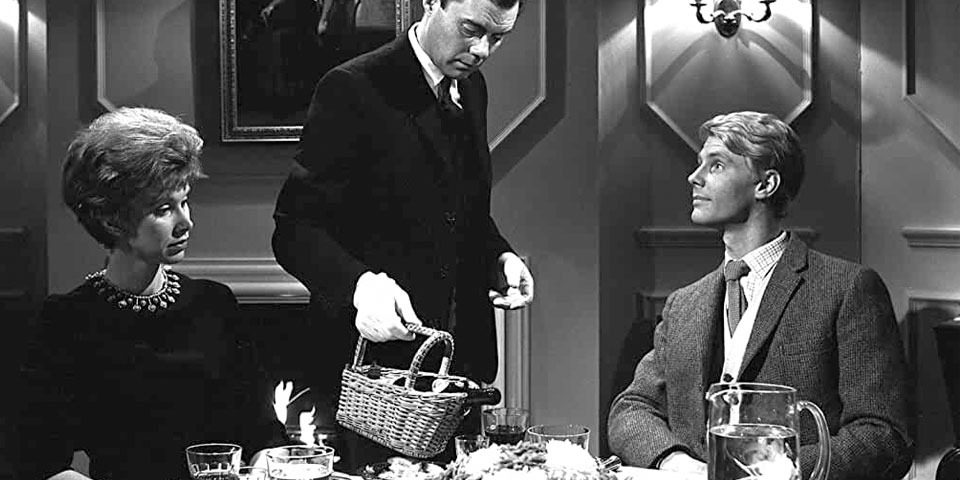 Published in 1948, THE SERVANT is written by the nephew of famous novelist and short story writer Somerset Maugham, Richard Maugham. It is a gripping psychological novella about the waning of post-Second World War class system in Britain. While this small bit of trivia is unknown to a lot of avid film lovers, its film adaptation is much loved by all. Made in 1963, THE SERVANT is American filmmaker Joseph Losey’s first of many collaborations with renowned Nobel Prize winning playwright Harold Pinter. Upon its success, they ended up making two more brilliant films, ACCIDENT (1967) Palme d’Or winner THE GO-BETWEEN (1971).

Tony (James Fox) a wealthy young Londoner hires Hugo Barrett (Dirk Bogarde) as his manservant. Initially, Barrett appears to be honest to his new job, and he and Tony form a quiet bond, retaining their respective social classes. Gradually, relationships begin shifting and they change with the introduction of Tony’s upper-class girlfriend, Susan who loathes the demeanor of Barrett.

Barrett brings Vera (Sarah Miles) whom he presents as his sister into Tony’s household as a maidservant, but it emerges that Vera is actually Barrett’s lover. Through Barrett’s and Vera’s games and manipulations, they reverse the roles with Tony; Tony becomes dependent on Barrett and the “master” and the “servant” roles blur. Upon re-watching it in the 2020s, many will be able to find similarities with current class-breaking films as they end up like the parasites in PARASITE (2019).

Dirk Bogarde as Barrett is wonderful as he transforms from the servile with oily hair to the menacingly stylish housekeeper. The main three actors are good except Sarah Miles who plays Vera with a shrilled voice. It doesn’t make much sense as to why a suave man like Tony would be interested in such a coquettish woman. Another factor that strikes as being odd is that some of the minor characters, like the women in the party scene, are cartoon like, and should have been fleshed out a little more. Furthermore, some scenes could have been shot more intelligently, unlike the conversations that take place at the different tables in the restaurant scene, adding neither to the plot nor to the ambience.

What might also stun the audience is the elite Susan (who clearly loathes the servant class) kissing the sinister Barrett who has a spell over Tony and has made him an alcoholic. One might say that Susan kissed Barrett to make Tony jealous. But this argument falls short as Tony was already drunk and not in his senses to notice his surroundings let alone the kiss. Such a scene turns this otherwise beautiful, chilling story into a slightly flawed one.

Aside from the script expected from two brilliant playwrights, the technicalities deserve a spotlight too. The black and white photography by Douglas Slocombe with mirrors and reflections is top notch. One scene that comes to mind is when Susan is visiting a sick Tony. She picks up a flower vase from the stairway and brings it to Tony to cheer him up. Then enters Barrett whose reflection we see in the mirror placed between Tony and Susan. We see him even before he physically enters the frame thanks to the mirror in the background implying the rift he is subtly causing between the couple. Another great mise-en-scène is displayed when Tony and Susan unexpectedly enter the house and are stunned to see Barrett coming out of the upstairs master bedroom in a grand housecoat with a cigarette in hand. But the scene is set in a metaphorical way as expected from Losey. Instead of showing Barrett’s blatant disregard for his master, Slocombe just shows us his shadow as he stands in an intimidating pose, cleverly placed in between the master and his girlfriend’s close mid shot in the foreground.

THE SERVANT is considered to be an important anthropological film as it dissects the British class system. Twenty-first century filmmakers are not the only ones breaking the norms of class and society as we have seen with this film. It further reminds me of our own master Adoor Gopalakrishnan’s VIDHEYAN (1994), a winner at Rotterdam, Singapore, and Mannheim film festivals. In it, we see the landlord and the servant sleeping with the same woman. The class divisions further merge, first, when the landlord asks the servant whether he liked the landlady, and next, while the master and the servant share the same food.

The Servant on IMDB