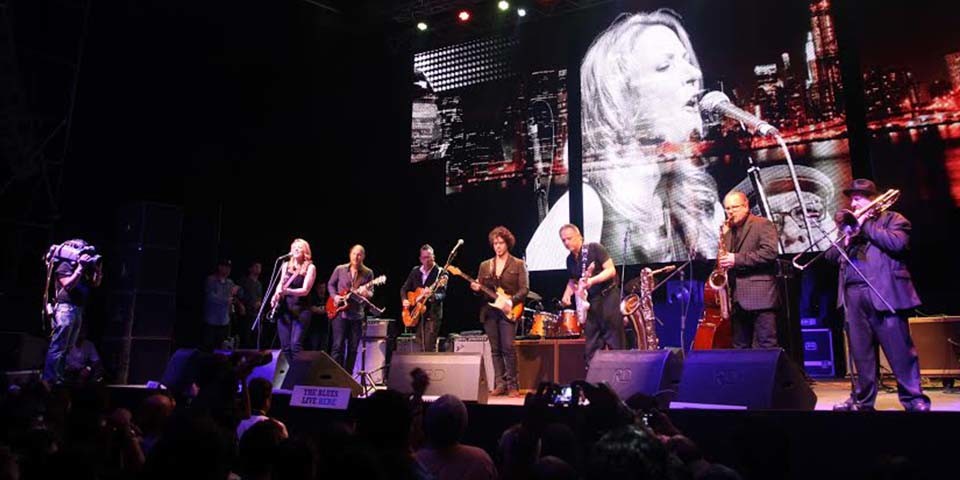 I wandered deep into the old cotton fields, and heard the voices of the sad Afro-American saints again, last night. And in those moments, I saw the light of eternity. For, the pathways to divinity exist in certain micro-intervals between the seven music notes. Even in the academic circles of music, these “slightly off tune” notes and the manner in which they are played is hailed as the Blues.

The roots of the Blues may be traced to the spiritual and work songs of the slaves, predominantly, in the Cotton States of the US. Of course, back then, nobody ever thought of it as a music genre. The Blues initially was simply a medium used by the slaves to dilute their pain.

“Centuries ago, the slaves in America transposed their slaving nightmares into a musical feel, which came to be termed much later on by the record companies as the Blues”, says Mathew Justus, veteran Blues singer-guitarist of the erstwhile ‘Highway Riders’.

“A Blues musician these days does not necessarily have to undergo slavery and sufferance to be able to effectively play the Blues. But they must be able to feel the inherent agony. Blues played by Indians are deficient because we have to try to reproduce the feel of the Blues. Whereas, when an Afro-American plays the Blues their entire body trembles with the feel and the music rushes out of them, for it is soaked in their very DNA”.

Traditionally, a Blues song employs a simple three-chord progression and a 12-bar structure comprising three phrases. The important notes are flattened thirds, fifths, and sevenths. And the scale is pentatonic.

“Raag Jog is a pentatonic scale like the Blues. Raag Kirvani, a harmonic minor scale, too, is rich with Blue notes”, says Poly Varghese, composer of the Oscar-winning ‘Smile Pinki’ and exponent of the mohan veena, an instrument that’s a fusion between a guitar and a veena. “However, Blues music ought not to be reduced to the technical. Blues is an emotional plea for eternal freedom”.Purely in terms of the technicality sans the Blues “feel”, the Blues has a prominent presence in Hindustani and Carnatic music. Notable musician Gunther Schuller states in his book, ‘Early Jazz: Its Roots and Musical Development’: “Indo-Pakistani music is divided into six principal modes, three of which—afternoon modes—are nothing but the Blues scales”.

Clownery, as Chaplin, Keaton, and Fellini have shown us, is a powerful disguise of great, sensitive souls with a sad past. Blues is the outbursts of ecstasy that partially hides the generations of pain deep within.

Over the years, the Blues has pervaded all genres of music. It forms an essential part of Rock ‘n’ Roll and Jazz. Strangely, some Indian musicians who aren’t tuned to this music, chance to compose songs that contain strong elements of the Blues. Such is its widespread subtle influence, and appeal.

“Essentially, to me, Blues music is soulful. It touches in a way that no other music can”, says Pradeep Joseph, CEO of Raga to Rock Records. “You can say that ghazals are kind of like the Indian Blues, but the Blues that emerged from the Mississippi has vital depth, and its poetry is wide in range, from sex and abandonment to politics and suppression”.

“You see, the Blues is truth. It’s real. Nobody can call themselves a Bluesman and not be a real man”, says Zac Harmon to the audience, at a previous edition of the Mahindra Blues Festival.

Blues musicians mostly wear a happy disposition. A majority smile delightfully while performing. Some dance. Or break into antics. Lil’ Ed continuously rolls his eyes, comically, while he plays and sings. Then, suddenly, he jumps off the stage and marches into the audience with his guitar.

But let us not be fooled by all this surface bliss. For clownery, as Chaplin, Keaton, and Fellini have shown us, is a powerful disguise of great, sensitive souls with a sad past. Blues is the outbursts of ecstasy that partially hides the generations of pain deep within.

This year’s star international line-up at the tenth edition of the Festival, Feb 08 & 09, Mehboob Studios, Bandra, Mumbai—Buddy Guy & Keb’ Mo’. I’m obviously not qualified to talk on the playing of either of these greats, so I won’t even make an attempt.

What sounds really jarring, and is ironic, though, is that the Blues, which originated as a music of the poorest folk, is being promoted these days in fanciful a/c halls. And the pricing of international Blues shows such as this make the tickets unaffordable to the working-class Blues fans but attract the wealthy, at least some of whom are here simply for a weekend outing with powdered faces.

Festivals such as this offer a fine opportunity for the newly-arrived and the wannabes to dress up artistically and try to behave like they belong where they don’t. One can generally guess quite accurately which of the folk are here for the pure musical experience and which primarily for the fashionable ambiance, simply by observing the manner in which they walk, talk, and hold their glasses and their heads.

It’s also not at all surprising that a pretty, dumb, twenty-something babe in the audience suddenly leans into my ears and whispers, “You’re scaring me”. That’s what the Blues does to you. Blues festivals are trippy. If you’re fully into the music, you see heaven and hell. If you’re out of it, it just makes you feel like a miserable conformist in purgatory.

“Blues music is a state of mind free from bondage and the weight of everyday life”, said late Babu K., former business desk editor of the Gulf Daily News. “Blues is an expression of the desire to break out”.

Blues is yoga. To feel its depth, you must lose yourself in the subatomic vibrations that reside in the particular intervals. You must allow these cosmic blue waves to completely overpower you and dance in every nerve of your body. For, once you have surrendered totally, your senses open to a new realm. And you experience the feel of endless freedom.

The Blue Notes at the Mahindra Blues Festival—2018