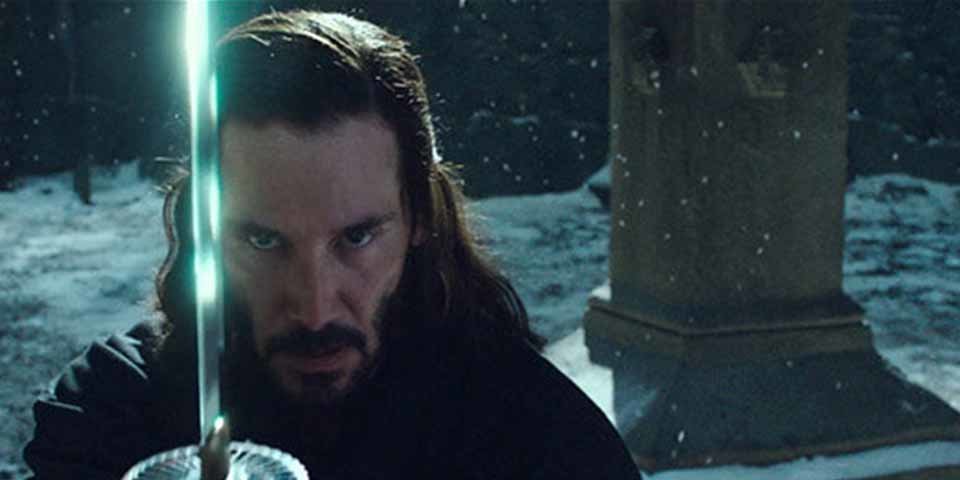 A Ronin, in Japan during the feudal period, was a samurai warrior with no feudal lord. It was a disgraced status. A Ronin was disallowed from serving as a samurai under another lord. 47 Ronin is a highly fictionalized account of a legendary group or forty-seven samurai warriors who were reduced to the degenerate status of Ronin after their lord was compelled to commit ritual suicide.

While on a hunting trip in the forest, Lord Asano comes across an English-Japanese half breed in the mud, and brings him up in his household. The outcast Kai (Keanu Reeves) grows up desiring to repay the lord for saving his life.

There’s something radically wrong with this outcast superhero. When a terrible, massive monster starts tossing samurai warriors into the air with an angry whip of its tail, he coolly inserts a sword into its belly and brings it down. But his superhuman strength isn’t sufficient to overpower a relatively mild fighter in the arena.

On the other side, an evil witch changes her form at will, from an animal to a flying woman, and back. With the kind of powerful magical powers that she possesses, you’d think she would be able to easily destroy an army with her eyes closed. Instead, she goes through elaborate plans and pains to bewitch Lord Asano to commit the crime for which he is historically infamous.

All this rubbish, including the outcast versus witchcraft bit, is a little too much. The scriptwriter brutally murders the factual story, which is engrossing.

There’s news that the debutant director developed cold feet half way through the filming, went way over budget, and was kept out of the postproduction room. Added to that, the studio bosses apparently reshot some of the fight scenes at the end to ensure that their star had a more prominent presence. What follows onscreen from here, therefore, just gets a little worse.

In real life, the forty-seven Ronin dispersed in various directions, gave up their sword lives, and became tradesmen, merchants, and monks. For a very good reason: to fool the spies of the rival lord whom they were determined to ultimately assassinate for revenge.

This intelligent strategic approach to attain an end is replaced in Carl Rinsch’s nonsensical filmy version with rash impulsivity and vengefulness, sorcery, monsters, a pretty girl, and the super man. The forty-seven Ronin won’t be very pleased to know that Hollywood has totally dishonored their noble act and memory.