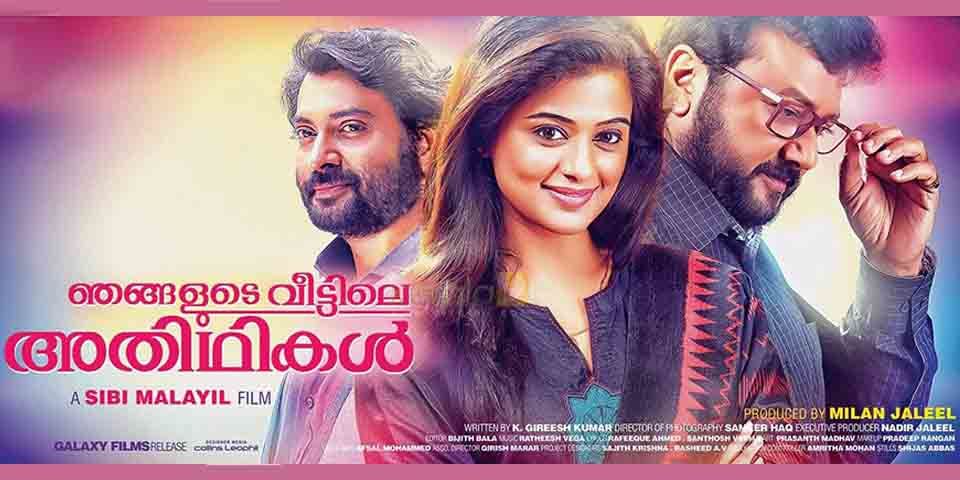 Schizophrenia. That’s perhaps the most fashionable term these days that ‘artists’, ‘intellects’, et al, love to throw around for effect whenever the talk is about madness. You’ll hear it being pronounced too in Njangalude Veettile Athidhikal (The Guests in Our House), a film that has nothing whatsoever to do with this tragic mental disorder.

The loss of a child in an accident can be traumatic. It’s enough to leave a psychological scar on Bhavana (Priyamani). Bereaved, her imagination begins to run wild. She suspects her husband, Advocate Manoj Kumar (Jayaram), of infidelity. And decides to get into an affair.

The writer ought to apply for the Brandcameo Product Placement Award. His central character falls madly in love with the bloke on the giant hoarding board across her flat. And the fictional man in the advertisement comes home to romance her.

Priyamani’s mono act lacks gravitas. Rather than putting up a fitting, solemn act, Jayaram prefers to laugh embarrassingly and clown around as usual. The shallowness of the duo’s performance is in stark contrast to those of the supporting cast/bit actor.

Comedy turns cold when Kalabhavan Shajon pulls out a knife. Lena as the friendly neighbor beams happily; her trademark inner sadness is not evident anymore. And the faces of Innocent and KPAC Lalitha when they realize that their daughter-in-law has lost her marbles are momentarily evocative of the golden era of acting in Malayalam cinema.

The execution is frail.

The dearth of ideas is made obvious when a hand-to-hand fight scene is introduced and a clumsy fellow with no skill smashes a hardened thug to a pulp.

The mood of the canvas is romantic: warm tones, specks of light and shade, and a lovely ambiance. There is too an important scene reshot from a reverse perspective. But no canted angles. Not even a remote attempt at intelligently playing around with the colors and objects.

The continuity is sometimes odd. In the middle of the night, the unstable character starts throwing things around, violently. The lights immediately come on in the house. But when the family rushes into her room, she is half seated in her bed as though she has just woken up. To portray the disturbed state of her mind, the ace up the editor’s sleeve is a clichéd dropped-frame gimmick.

Sibi Malayil’s hallucinating protagonist is a caricature of abnormal psychology. The famed filmmaker himself appears to be almost completely losing his grip over the filmic art.