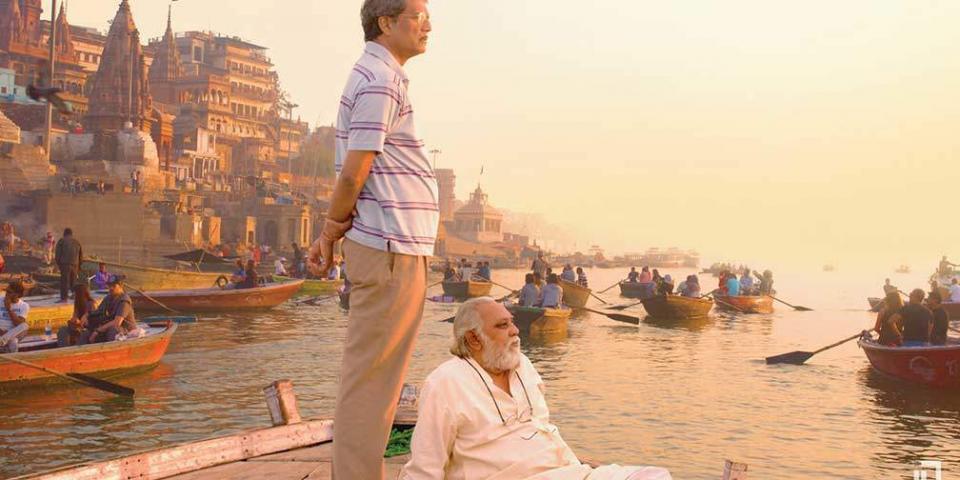 In Mukti Bhawan, an old man gets a premonition of death and takes off to the banks of the Ganges to live out his last days.

Awards:
Unesco jury – Enrico Fulchignoni citation award for Shubhashish Bhutiani “For the values finely expressed on the importance of family, time passed together in respect and with love, and those values of human rights which we all share.”

“To shuffle off mortal coils, to be free of all earthly ties, to be one with the almighty: the ancient Hindu concept of ‘moksha’ is sublime in its beauty and simplicity, as both philosophy and practice, to live and die by… Bhutiani’s debut feature is a many-layered revelation: of the interplay between life and death, the see-sawing connectedness and distance between family members; and how, in a very profound, absurdist sense, all of life is a journey towards death.”


Shubhra Gupta, Indian Express
“Cinema must often rely on dramatization to highlight a story. But when your subject is so bizarre, the challenge is to treat it with measure and normalcy. Director Shubhashish Bhutiani’s powerful feature-film debut, Mukti Bhawan, does not only that, but manages to add a lens of scepticisim and humour to what is otherwise a morbid, depressing story… Makes you laugh, and cry, and think and question. It’s what good cinema and storytelling are meant to do.”


Sarit Ray, Hindustan Times
“Fittingly, in the screenplay penned by Bhutiani and Asad Hussain, death is given the dignity it deserves without letting frivolity blunt its edges. Just like everyone’s take on life is different, they have a unique approach to death as well which makes this film richer. It breathes slowly with the frames being luxuriated by Varanasi in all its realism.”


Stutee Ghosh, The Quint
“In the past couple of years or so, independent cinema in India has seen the emergence of several exciting, remarkably individualistic voices… Add Shubhashish Bhutiani to that list – at the very top of it at that. So impressively accomplished and sure-handed is his debut film that it is hard to believe that he is only a 25-year-old.”


Saibal Chatterjee, NDTV
“Constant tension – between the desire for a liberating death and the drudgery of an unfulfilled life, between resignation and acceptance.”


Tanul Thakur, The Wire
“Immersed… in the traditions and idiosyncracies of a local culture.”


Uday Bhatia, Live Mint
“Reveals a gift for finding beauty in everyday situations, and for creating fleshed-out characters that speak and behave like real people; recognizable folk with relatable conflicts.”


Rajeev Masand, News 18
“As much about its characters embracing the inevitability of death as it is about their loved ones grappling with conflicting emotions. After all, the ‘process’ of living is as essential as the inescapability of dying.”