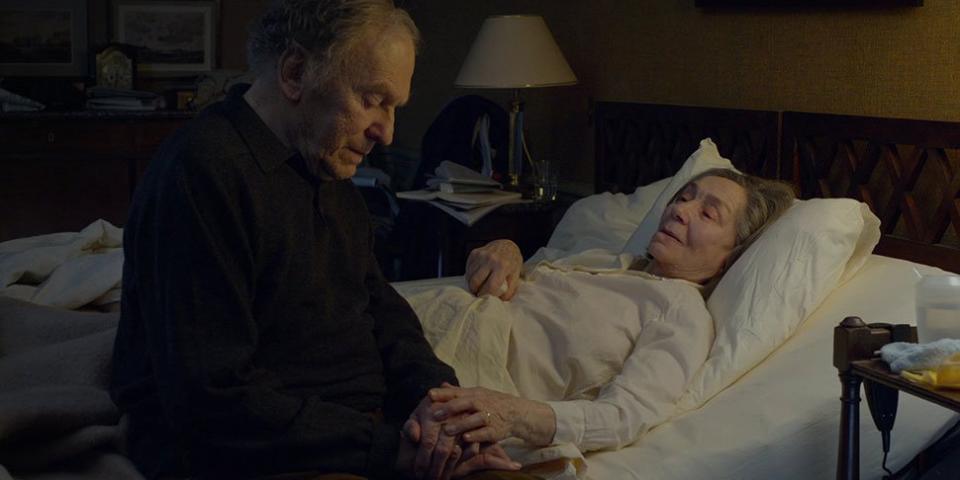 Amour (meaning ‘Love’) stars Jean-Louis Trintignant, Emmanuelle Riva and Isabelle Huppert. The narrative focuses on an elderly couple, Anne and Georges, who are retired music teachers with a daughter who lives abroad. The opening scene shows firemen breaking down the door of an apartment in Paris to find the dead Anne (Emmanuelle Riva) lying on a bed. Anne is married to Georges (Jean-Louis Trintignant), who are both in their eighties. One morning, they are eating breakfast together and Anne goes silent. She doesn’t respond to Georges as she sits in a seemingly comatose state. George tries to get her attention but in vain. He goes off to fetch assistance but she comes around on her own in a few minutes, remembering nothing of what has just taken place. Medical opinion is that Anne needs to undergo surgery on a blocked carotid artery but the surgery goes wrong leaving her partially paralyzed. She makes Georges promise not to send her back to the hospital or put her into a nursing home. Their daughter Eva (Isabelle Huppert) appears now and then with or without her British husband and shows concern but Georges tells her bluntly that ‘concern’ is useless since Anne cannot be put in a hospice and Eva cannot tend to her. He hires a nurse to look after Anne but the girl turns out to be too brutal. Georges pays her and sends her away, telling the angry girl that she should be treated the same way that she treats her patients when she is in a helpless condition and at the mercy of someone else.

Amour is visually impeccable and all its three stars are of iconic status. Emmanuelle Riva is best known for her role in Alain Resnais’ Hiroshima Mon Amour (1959) while Trintignant is among the greatest of film actors – having appeared in Roger Vadim’s And God Created Woman (1956), Eric Rohmer’s My Night at Maud’s (1969) and Bertolucci’s The Conformist (1970), which are considered landmarks in the history of cinema. Isabelle Huppert is younger, and for the past decade has been the biggest female star in French cinema.

The opening of Amour is impressive but after a quarter of the film has been endured, one begins to feel cheated because all one is privy to is physical suffering brought on by old age. Terminal illness has sometimes been treated harrowingly in cinema – Ingmar Bergman’s Cries and Whispers (1972) and Patrice Chereau’s Son Frere (2003) being the most affecting – but compared to them Amour even appears sterile and timid. Given the kind of physical realism that thespians Trintignant and Riva bring to their roles, one wonders why the film is not absorbing and the reason soon becomes evident. If one looks at the other films just cited, their focus may be physical suffering and enfeeblement but there are nonetheless other issues that the films are preoccupied with – faith and God in Cries and Whispers and fraternal tensions in Son Frere in which the terminally ill brother is a homophobe and cannot deal with his younger brother’s homosexuality.

Amour, in contrast, deals with no issue apart from that of old age and its enforced loneliness. The point being made here is that when a relationship of any kind has lasted for as long as this one – around 50 years – it may be expected to have picked up baggage and Haneke treats the relationship between Georges and Anne as though it had no history at all. He may have enlisted the biggest stars in French film history to essay the roles but, in the film, they are merely old people in the twilight of their lives being what they essentially are – old people. Although Trintignant gets some strong lines which liven a few moments in the film there is little for him to do except tend to Riva. Emmanuelle Riva’s role itself could perhaps have been played by any old woman in the same geriatric condition. People as old as this have naturally expressive faces – because a whole range of emotions are etched permanently on them – and one does not need a celebrated thespian to play an elderly person.

We also do not understand what Isabelle Huppert is doing in the film because Eva’s relationship with her parents is far too ill-defined to be of interest to anyone. One wonders if Haneke cast experienced actors in these insubstantial roles in the belief that they could hold audiences on the strength of their physical presences – because the script (also by Haneke) gives them nothing except old age to cling to.

The two other aspects of Amour needing comment pertain to its title and its use of music. ‘Amour’, as already indicated, means ‘love’ and the film passes the relationship between Anne and Georges off as a deeply loving one. The difficulty here is that ‘love’ cannot happen without conflict of some kind. Just as ‘courage’ cannot exist without fear – because acting courageously is acting despite fear – love is unimaginable without an element of discord. In fact, when one examines the legendary love stories in literature and cinema – from Anna Karenina and Vronsky to Rhett Butler and Scarlett O’Hara – the relationships are hardly untouched by conflict. When Haneke gives the relationship between Anne and Georges no history, he denies it the element of conflict which might have enriched it.

Georges and Anne are music teachers but one wonders what significance this has in the story. In the first sequence in which there are seen together, they are in a piano recital and the pianist also visits them later. Music plays no part in the plot and my sense of it is that classical music (Schubert) is being used simply as a way of imparting gravity to an essentially trite exercise. The best French cinema (Bresson, Rivette), in its pursuit of cinematic purity, often uses no background score and Haneke may be attempting to follow in its footsteps. The difference is that Bresson and Rivette hold our attention entirely through the action while Haneke is using elevating music and pretending that it is part of the action.