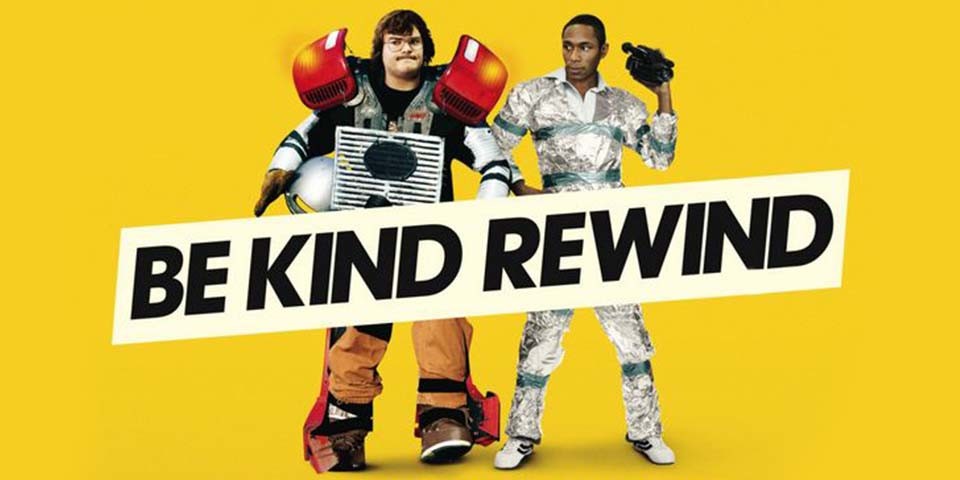 The winds of radical change is both refreshing and destructive, and forcefully dashes against that which stands in its path. Be Kind Rewind is atomically about the coming of technology, and holistically about the future of individual and cultural roots seemingly doomed in the onslaught of progress.

Grainy, B&W footage in a 4:3 box format, of a jazz pioneer, sets the perfect introductory tone for this composition on small-town folk embracing their legacy in its dying throes.

Faced with the prospect of closure, Elroy Fletcher (Danny Glover), the owner of a VHS rental library, sets out to survey the new-age digital libraries, determined to find out their secret of success and implement changes accordingly. While he’s away, a duo resorts to unorthodox guerilla filmmaking with an old VHS camera, and then rent the finished videos to their very-pleased library members.

The film with its old-neighborhood kind of characters, nice and never in a hurry, brings back good memories from the past. Glover represents the generation that does not want to let go of the familiar. Mos Def is super slow at understanding simple things but he’s enterprising. And Jack Black is the stereotype slightly-funny-in-the-head fellow. The trio portrays perfectly the attributes of their respective characters.

Much of the ideas and methods that the filmmakers-within-the-film come up with are totally weird, and ingenious. Everyday objects are videographed from unusual angles. To show a man running sideways inside a giant wheel, they simply turn their camera sideways onto the actor. The traffic of the early-forties is massive cutouts that move across the frame. And coming to bathe opponents with a shower of bullets, the mafia rides into town in a bathtub on wheels.

Comically demonstrates the power of the documentary in manufacturing history

The roaring success of the duo’s no-budget, unorthodox filmmaking efforts speak volumes. The film as well as the film-within-the-film glorify simplicity, and ought to be an encouragement for wannabe filmmakers. All that one needs to make a film of any genre, it emphasizes, is creativity, practicality, and a highly positive attitude.

Showcasing the talents in a crunch time of a bumbling store-manager who can’t read or operate a simple cash machine but turns out to be a bestselling filmmaker, a nutcase who becomes a film star, and an over-the-counter salesgirl with the prowess of a marketing genius, the film suggests that ordinary folks simply need the right opportunity and circumstance to prove their real worth.

Michel Gondry’s wild comedy also pays tribute to jazz legend Fats Waller, and, in the process, comically demonstrates the power of the documentary in manufacturing history.