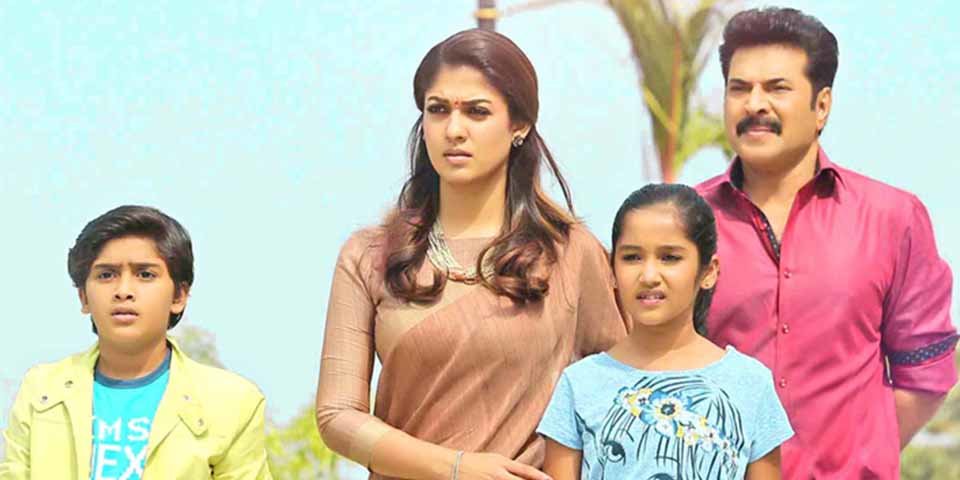 Family dramas aren’t quite what they used to be. In addition to the usual familial emotions, romance, and comedy, Bhaskar the Rascal has a fair amount of elegant décor, suspense, danger, and power-packed fights meant primarily to enhance the image of the film’s megastar.

Part of the reason for this unnecessary package is because you have aging stars who are nervous at the rising competition. Instead of simply being themselves and overriding their rivals through the sheer power of their genius, they rely on recent-past formulas of relative success. And refuse to break free.

Treading superstitiously/cautiously, Mammootty once again dons a titular role. And he goes about his everyday life with an absolutely comic attitude. Before his pubescent child he’s the epitome of naivety and submissiveness, and fondly accepts the boy’s scolding.

Master Sanoop, who displayed a wonderful range of mannerisms a couple of years ago in his sensational debut, Philips and the Monkey Pen, knows exactly what is required from him here in his second major appearance. An occasional charming smile. An endearing face covered with tears. And for the rest of the time, a semi-permanent scowl caused by the memories of the embarrassing deeds of his rascal dad. Disciplined, the boy remains in character throughout and doesn’t ever attempt to show off, though it is obvious that he is capable of much more.

It is to the credit of both these stars that their father-son relationship appears so natural and believable; the real age gap notwithstanding.

I loved the premise. A little boy and a little girl (Baby Anikha; sweet as ever), want to pair up their respective daddy and mummy (Nayanthara; short tempered as a single mom in need of a man). Now, all that was needed was to build a memorable intimate story around that. And everyone would have been very happy.

The problem is that this is the twenty first century. And many successful directors of yore have this funny belief that they need to degenerate to be able to draw an applause from today’s audience. So, they change their original style. And add a lot of incredible rubbish. Siddique’s present brand of humor is a very pale shade of his earlier days. He relies on a whimsical plot with concocted action and twists and turns rather than an intelligent script with the potential to have family audiences alternatively crying and laughing their guts out.