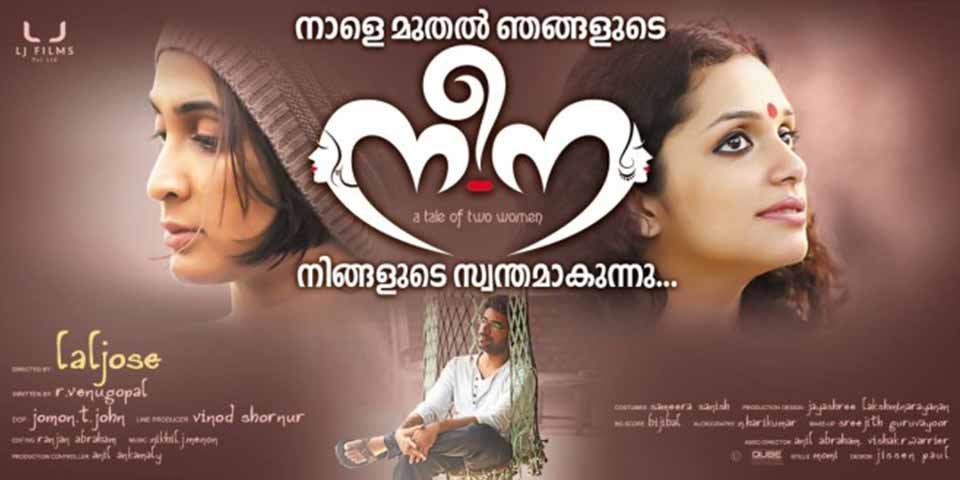 Touchingly, Nee-Na flows, sweet as a romantic poem. Thus, you may not mind that there’s nothing new to the premise: a happily married couple rocked by the entry of another girl. Or to the plot: heads, the man goes with the new girl, tails, he remains with his wife; either way, it’s headed for a sad ending, as all triangle love stories are meant to.

The costumes, hair styles, settings, props, and music (Bijibal) come together to cinematically accentuate the extreme stereotypes. Neena (Deepti Sati), wearing a male-symbol tattoo, short crop with a side swept bang, and torn jeans, riding a bike, hitting the discs, a bottle of vodka always in hand, westernized music playing in the background track. And Nalini (Ann Augustine), wearing long curly hair set free and a traditional white sari, mostly at home, drinking coffee, to the backing of sitar strings.

It is significant to note that though the titular character is Neena and this is primarily her story, her heart and name in the film’s title are broken, and a question mark hangs over her. She appears to be condemned to share the syllables of her life with another girl whom she has no reason to like. Such touches are nice.

Writers, however, ought not to write about things that they know nothing about. Else, they ought to at least consult experts from the respective areas. A light look is taken at the mind of a once-happy wild child raised like a male. (At the onset of puberty, a girl angrily realizes that it would never be possible again for her to continue enjoying the kind of freedom offered by nature and society to a man.) But the psychology of lovers and alcoholics are oversimplified. All the dialogues related to the advertising profession too are phony.

The camerawork by Jomon T. John, correctly, does not draw attention to itself in its process, in particular, of extracting the best out of the actors.

I shall not enter into the debate of whether the facial expressions of a drunkard would have been more accurate had Deepti Sati downed a few shots before her takes. For someone on debut, she’s done a fine job; from the ease with which she falls headlong into the swimming pool to the trembling of her fingers. It helps a lot too that she speaks with a babyish tone. When the lights that fall upon her are diffused and she cries, you feel like reaching out to comfort her. Such is the pull of cinema.

An image of iron, Vijay Babu is a smiling yet no-nonsense father figure. But biology is not something to be trifled with. Alone in new surroundings with a girl, the urge for the forbidden begins to take over, and his face melts with trepidation as he falters on the altar of integrity.

Ann Augustine is the picture of the stoic, smiling, trusting, doting wife. She hides her utmost displeasure from others, and shows it only to the camera. Rather than having her go stark raving mad, the director employs a very interesting technique: heightening the intensity by drawing a parallel. At the moment when Ann’s character experiences the tearing of a relationship, her maid enters the house in a state of hysteria caused by the infidelity of her own man. Thus, the histrionics of one actor is used to expose the inner feelings of the other.

Lal Jose has a fresh approach and a classy, catchy style that requires no megastar to keep the audience in their seats. His lead character, highly reminiscent of that from a classic martial arts film, will remain with you long after this beautiful dream is over.