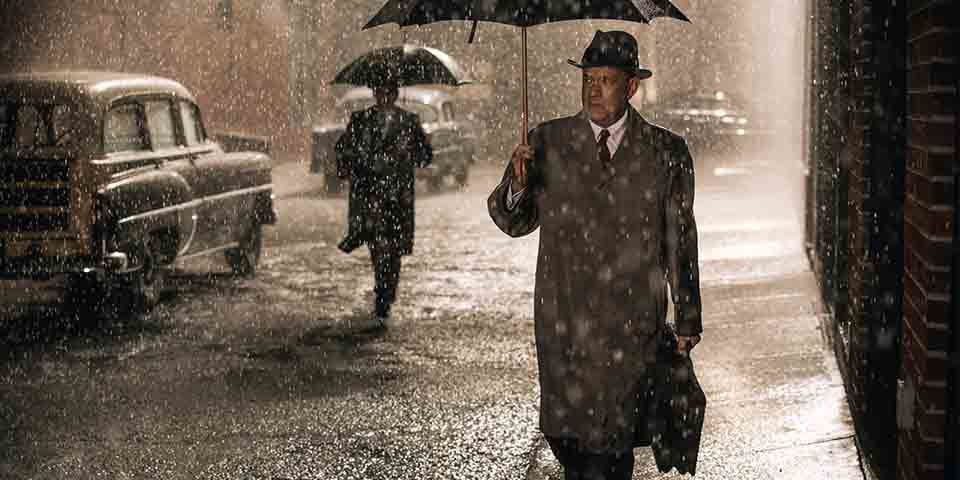 Steven Spielberg’s penchant for historico-political films began with The Color Purple (1985), for which he was panned both by the American black community and the critics. He grew up, in a big way, since this early attempt, when he tried an epic scale recreation of the Auschwitz, its background and the story of a gentile German industrialist who turned humane.

Spielberg experimented with different historico-political genres, spanning his entire career, a large number of which revolved around the World War II. Indiana Jones movies (1981- 2008), Saving Private Ryan (1998), Schindler’s List (1993) and Munich (2005) were among these. However, With Schindler’s List (1993), the story of the man who saved a lot many lives, Spielberg found his true mettle as a sympathetic chronicler of history.

Exactly the same structure is repeated in Bridge of Spies, the latest offering from the Dreamworks Studios and a line-up of integrated companies, including Reliance Entertainment, with some of the regular faces from the Spielberg troupe, including Tom Hanks, as Lawyer Donovan, the hero of the film.

This is a story from 1957, the peak days of the cold war. The post-80s generation does not know the tension – the tantalizations produced by the capitalist glamour, the battle for supremacy which the bipolar world saw for thirty-five years. This is the backdrop against which the American Superheroes were born. James Bond, Superman, Rambo and some of the Schwarzenegger films would capitalize on the tense wirewalk situation, in the tug-of-war for the world dominance, after 1945.

James B. Donovan, a Brooklyn Lawyer, is appointed by the CIA to advocate a special client, Rudolf Abel (played by Mark Rylance), a Soviet spy. The American judiciary wants to send the man to electric chair, but only after the mockshow of proper judicial proceedings is over. To most Americans, this old man, whom the CIA calls Colonel Abel, represents the highest mark in treachery. Even Donovan’s own family calls the man traitor, something which he quickly corrects. “He cannot be a traitor. He is not an American”, Donovan says.

He decides to help the old man. Abel may be a spy, but he works faithfully for his own government. He is a loyal human being with all the qualifications that make one a perfect citizen, Donovan reckons. Nobody understands his point, however. He is attacked, sometimes literally, by jingoist Americans who feel anybody helping a ‘traitor’ must be a traitor himself.

This is the conflict of Spielberg’s film. It is man vs society – something in which the Director loves to dabble.

This is the conflict in the modern history too. In the pre-industrial days, India was non-existent. South Asia was a formidable stretch of group of empires intermittently ruled by Arabs, Turks, the Chinese, ‘Hindu’ rajas, and the Dravidian and middle Indian dynasties. Politics was a non-existent concept beyond the circles of diplomacy. The common man existed either as free citizen, or as slave, to keep the local and the central/urban economies running. This was a little different in Europe. The new spree for navigation and colonization expanded the broken pieces of the Roman Empire. The unquestioned homage to the Church and the King was dithering ever since the inception of democracy, formation of the parliament in the shadow of the Greek and Roman senates, and the Protestant movements in Christianity. The centralization of power and the national identity were clearer to the Europeans, although the power-hierarchy and the geography of the political nation kept on shifting. It took the Indians much longer to get a national identity. That too came as part of the British rule. An average Indian hardly felt any difference between the shift of his subjecthood between two kingdoms, before the British came. At best, s/he was the subject to a King, or to a martial norm or religion – such as the follower of Rana Pratap, Guru Tegh Bahadur, or Shivaji. Identity was connected to rites, being part of a group members of which follow the same ritual habits (Sangha – such as Buddhist Sanghas), honor (Rana Pratap refused to be Akbar’s mansabdar because of several reasons. The honor of his dynasty was one of them), social position regarding relation to land, relation to trade and relation to organized religion (i.e., particular temples or religious sects.)

As there was no national identity, there was not so strong abhorrence for political spies. Instead, that deep, nauseating, hatred would be reserved for religious strangers – renegades, rivals or freemen. The idea of POW exchange was not new probably, either in South Asia or in Europe; but the concept was not fully functional for secret agents until the civilian, Donovan, came out with its usefulness.

With his regular team of collaborators – Kamisnky on the camera, Kahn on the edit, Carter on the production design and Williams on music, Spielberg chose to tackle the story of cold war spies, rather of their fate when they are caught on duty, by the enemy. The film, plotted linearly, is important as a matter of debate today, when the global population is divided between responsibility and doubt, when we are confused between freedom and illusion of freedom.

Bridge of Spies is especially meaningful for enemy nations such as India and Pakistan – nations that defy the definition of nation, going by the root of the idea in cultural nationality and origin. The film is relevant to the net-generation because the origin of the communist movement is clouded in the failure of socialism in the Soviet and its aftermath, and the subsequent victory of the US in the cold war. It is history to them. They do not believe history. For over one decade, an extreme apathy for writing and reading history, and history itself, has been rampant in the world, especially in the South Asia; especially among highly salaried people who work in the ITES and IT sectors, and their children. It is not so for the people who control business. They cannot afford to ignore history.

Spielberg’s Bridge of Spies may rekindle the interest in practical history – where the knowledge of history can be contextualized and applied to make profit in the practical chores of life. In simple sequences, on both the sides of the Atlantic, and on both the sides of the Berlin Wall, through the calculated, humane, pursuit of the lawyer Donovan, we come to see that imperialism has no color. Be it capitalist or communist, American or the Soviet, colony reeks of servitude. We see that all nations, each individual culture, have ego. East Germans never loved to see themselves as stooges to the USSR. It was the same for the other republics, clubbed in the USSR, along with Russia.

In the wake of the Russian emergence under the supremo Vladimir Putin, the tension in the Ukraine for the last one year and half, and the the US’ military mobilization on the German shore at a time when the ISIS is totally rabid in the Levant and the Asia Minor, Spielberg’s Epic saga of a lawyer who takes the good samaritan’s burden to create a ‘peaceful’ world takes new meaning.

The US of A is made on the weight of the constitution. That makes America the best country in the world, and the freest too. These are some of the legendary myths that we hear and believe. Bridge of Spies moves around these, hypocritically, and sometimes makes a closer observation. Michael Kahn’s edit lingers and snaps around this play in hypocrisy, time and again. It was Spielberg who noted, in an interview, that the average shot length (ASL) in a typical Hollywood feature had decreased dramatically, in the 90s, due to the over-prominence of the Cinemascope frame. To draw attention to a character in the frame, the Director must take him/her in Close Up for a longer time now, Spielberg commented. Else, the frame would offer competing characters and set-properties distracting the attention of the spectator (in other words, the frame would look cluttered, bad or loose, and uninteresting).

It is impossible for the frame to stay interesting with the Close Up of the same character for a long time. The frame becomes preachy in such cases. The only solution is to change the frame either by moving the character from his/her Close Up position and replacing the space with something/someone else, or by cutting to a different frame. The latter approach is easier and leads to a more free-flowing narration most of the time. Hence, any film shown in the Cinemascope must take a cutting pace like the thriller genre, Spielberg observed.

Bridge of Spies uses a pattern of alternating medium-long and very short takes, at places. Kaminsky’s cinematography, following what we may call classical today, helps in structuring that beat. However, there is nothing new in narration aesthetics, and style, that the film offers. The same centrist position of the characters in the frame (for which Hollywood is known), the same classical movements and stops (the apex of which we have seen fifty years ago in Ray’s Charulata (1964)). There is no authorial signature.

Truffaut commented long ago in the pages of Cahiers du Cinema, “In the final analysis, we loved the American cinema because the films all resembled each other.” It was impossible sometimes to find out who made which film, despite the authorial signature left by auteurs such as Hitchcock, Ford or Hawks. Lately, when the young Turks of the New Hollywood have all grown old, Truffaut’s comment calls for renewed attention.

Imdb link of Bridge of Spies

Anirban Lahiri is an award-winning film critic, and film journalist. He used to be the executive editor of Film Perspectives. He taught cinematography for several years at the Digital Film Academy. And is presently teaching cinematography at Mumbai University.