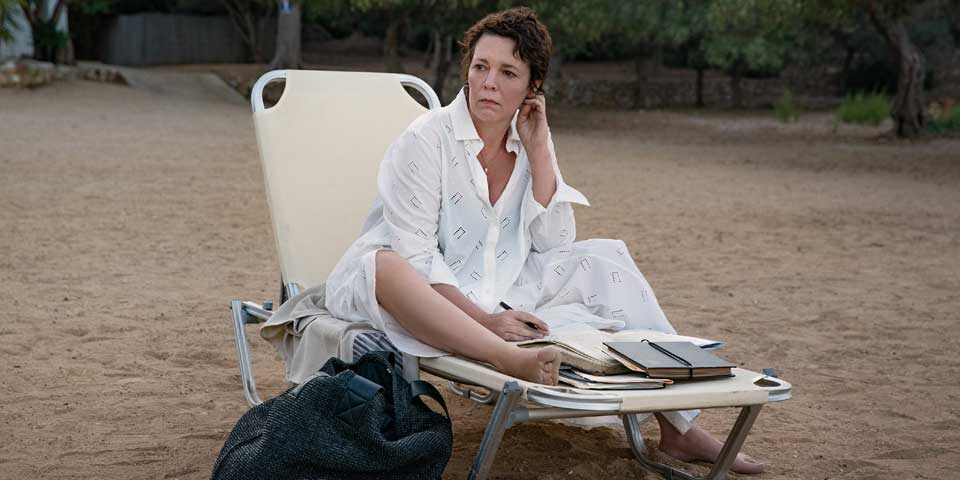 The Lost Daughter is actress Maggie Gyllenhaal’s first feature film as a director. The psychological suspense drama follows Olivia Colman’s Leda as she decides to take a vacation on a Greek island only to be confronted with her inner demons as intriguing hotel guests invade her holiday. The whimsical Nina played by Dakota Johnson, her young daughter Elena and their loud and unruly family unknowingly trigger Leda’s buried trauma as she constantly finds parallels with her own youth as a young and distant mother.

From the get-go, the film sets an air of mystery with blue tones, haunting and somber music and the intense and tenacious Ed Harris playing the role of the caretaker who brings Leda to her hotel room. The staff and guests are uncharacteristically chatty and overly nice making viewers wonder if we are about to get a ‘Stepford Wives’ 2.0. Leda keeps everyone at bay, simply observing the guests, especially Nina. When the little Elena goes missing, Leda rescues her while suppressing the memories that bubble up of the time when she lost her own daughter Bianca.

However, Leda steals Elena’s doll and doesn’t return even when the little girl cries and falls sick. We then get her reason for stealing the doll as we get into flashbacks where we see a young Leda being a terrible mother to her two daughters. From temper tantrums to simply ignoring her two children, we see that Elena’s doll unlocks those memories as she had once such a doll that she threw away while lashing out at Bianca. Leda continues to see herself in Nina, as the young mother is unable to handle Elena, cheats on her husband with the beach lifeguard and is an emotional wreck. Leda gets angry at herself as it reminds her of her affair with Peter Sarsgaard’s Hardy and the time she left her daughters for three years and only returned when she missed them.

In the end, she decides to give the doll back to Nina as she feels for the young lady who is going through the same things she did. But a furious Nina who cannot understand Leda’s actions accidentally stabs her with her hairpin and leaves. Angry at herself, Leda immediately leaves the hotel and faints at the beach out of guilt. She wakes up to her daughters’ phone calls who have patched up with her since the incident with them was 18 years ago.

Maggie Gyllenhall tries to share the message that being a good mother is not genetic and hence giving birth and being a mother is not the only reason for a woman’s existence. Leda is a grey character as she even accepts that she felt amazing abandoning her daughters and being free from motherhood. While this is not a ground-breaking revelation, the empowering and feminist subtext blinds fans from the faults of The Lost Daughter. In today’s time, an average film should either be technically well-made or have a strong script as cinema is first and foremost an art form of story-telling. Unfortunately, The Lost Daughter fails in several aspects like the poor characterizations, extremely close shots meant for symbolism and foreshadowing which just creates a disjointed experience as you lose the context and a one-note script.

We do not get a redemption arc for Leda as she is not punished for her sins. There is no catharsis either as she has already patched up with her daughters 18 years ago. Had the film taken place during the time she had abandoned her daughters, and the events with Nina makes her go back to her family, it would have made a much satisfying ending. We also have the red herrings such as the mysterious atmosphere of Nina’s supposedly mafia family and their henchman Ed Harris which makes us think that it could be a murder mystery or some kind of suspense thriller. We get several moments, from Nina stabbing Leda, Ed Harris’ clinginess, Nina’s husband played by Oliver Jackson-Cohen who seems like a thug that sets up a mystery that never comes. We even get Leda running over something as she drives to the beach after her altercation with Nina that makes the viewers think that she has killed her. However, the build-up leads to nothing as everyone just goes on with their life in the end.

Except for Leda, none of the characters has been fleshed out. Brilliant actors like Ed Harris, Peter Sarsgaard, Dakota Johnson and Oliver Jackson-Cohen are wasted in their two-dimensional roles as they are majorly props for Leda’s flashbacks. Jessie Buckley does a good job with the complicated young Leda. Oscar and Golden Globe winner Olivia Colman as usual is brilliant as the present Leda who is on the verge of a nervous breakdown as the film progresses and her time on the island keeps bringing back her memories. And with Colman being a strong enough actress to carry a whole plot on her own, The Lost Daughter could have been saved had the script been tweaked a little.

IMDB link of The Lost Daughter, streaming on Netflix.