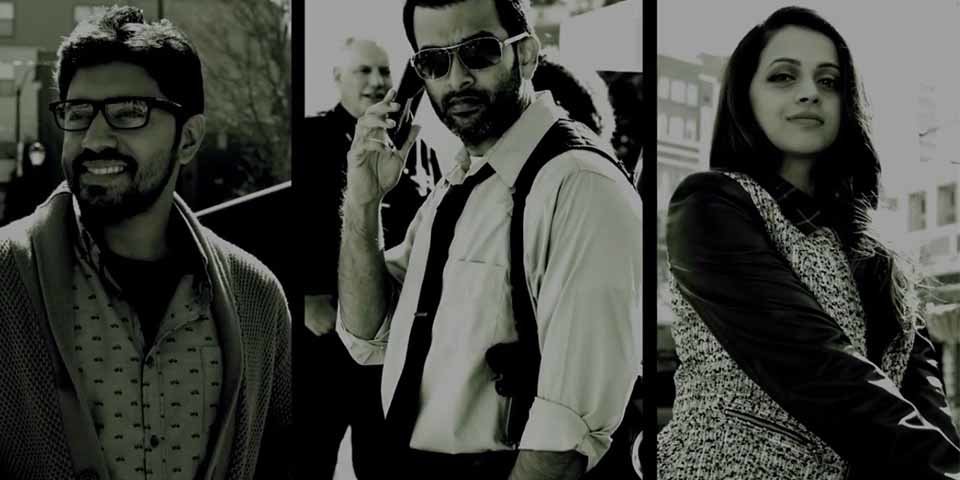 The first thing you’ll subconsciously notice in Ivide (Here) if you’re a regular contemporary-English-films viewer is the Hollywood style of lighting and shot taking. Listen closely, and you’ll hear things too that weren’t a staple of the old Malayalam films: full songs playing in the background; the voice at the other end of a phone line; and the intensified sounds of chosen objects, on a separate track.

What spoils such a carefully crafted mood is the melodrama, introduced with the false belief that the audience is still a fool. And the staged look of certain scenes. Here’s something that’s rather odd: The setting is Atlanta, one of the highest crime zones in the US. And the office of one of the police departments there? Oh, not much activity. It’s like some kind of a lazy, cozy place to chill out.

The film title is in the form of a maze. The film, however, plays itself outs with no pleasurable surprises along the way. The people that get murdered are all Indians. So, you know that Detective Varun (Prithviraj) is on the right track. There definitely is a serial killer on the loose. Someone who holds a grudge. The police chief’s conviction to the contrary can only mean one thing: that either he or the scriptwriter needs to be sacked.

Further, if you’ve watched even just a handful of US police stories, you know immediately whose family the killer will soon be out to get. Maybe our detectives too ought to have watched a few US detective thrillers before they got onto their jobs.

What’s even worse? This detective protagonist is out to destroy the image of Indians abroad. One can understand that abandoned orphans sometimes carry their scars well into their adulthood. But, pointing a service pistol on the head of the girl who loves you unconditionally? And coldly insulting the sweet old American lady who gave you a family and life and continues to mother you with pure love? What kind of values are these?

It would be fine to say, “Oh look, Prithviraj looks so mature and different with that salt-sprinkled beard and he rolls his ‘R’s in a nice half-Americanized accent”. But it is pointless to comment on an actor’s performance when the character that he plays is flawed from the roots.

And it’s not just the psychology of an orphan that I’m referring to here. Gunmen in the US on both sides of the law, the enforcer and the breaker, literally live by two golden rules: in a square off, never take your gun off the target for a micro moment and never hesitate to take the other down when the timing is ideal. Here, in a highly volatile situation, the criminal is distracted. And what does our great hero do? He continues to talk. Someone should have yelled out to him. “Cut the darned psychoanalysis out, and fire”.

Nivin Pauly’s character is an example of the many Indians abroad who have made it to the top through sheer hard work, dedication, and education. His eyes are focused on his goals. And he will quote the Mahabharat to remind himself that he’s a winner and not someone who can be easily trifled with. Bhavana’s character is strong yet fragile. She’ll cry her heart out. She needs to be loved.

The non-Indian actors come across as rank amateurs with some potential talent.

Meanwhile, Prakash Bare, who started out rather late, puts up yet another impressionable performance. Here, he walks about comfortably in the shoes of a happy, stupid fellow, unfairly named Mr. ‘Murthy’, founder of a happening IT company in the US called ‘Infotech’. If character assassination laws were strict in India, the scriptwriter would have been swimming right now in a bowl of hot soup.

The lonely little girl who plays the daughter of an estranged couple breathes warmth into this sad NRI family drama. In a way, the film is a stark reminder of some of the reasons that contribute to make divorce quite the fashion these days: mistrust, fear, violence, non-transparency, arrogance, and lack of humility.

It’s wonderful that Shyamaprasad has outsourced western technicians. The contrasts of light and shade add depth to the images and give dimension to the subjects in focus. Even if not exactly of the highest caliber, such visual treatment adds immensely to the revolution initiated by the new-gen filmmakers. The next step ought to be to compel exhibitors to pull up their socks. Presently, the viewing experience, even at multiplexes, is terrible.