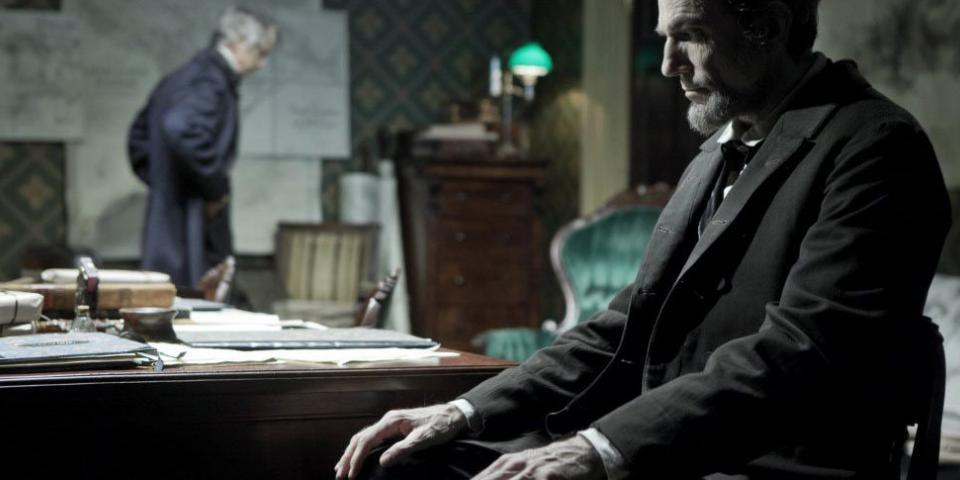 There are numerous ways in which a biopic of a statesman or a politician can be put together in cinema and the chosen approach depends, partly, on the reverence with which the person is regarded by the public likely to watch the film. When a statesman is as well-regarded as a Lincoln or a Gandhi, it is impossible to be ‘truthful’ because a biopic, not being a documentary but an enactment, will be seen as being deliberately scurrilous unless its views agree with the dominant one. Where, in a biopic of a less venerated or more distant historical figure like a TE Lawrence or a Queen Elizabeth I, the director is allowed to become intimate with the subject, this is taboo when dealing with a Gandhi or a Lincoln. We identify with people who might have been as we are but a Gandhi and a Lincoln, at least by consensus, are too gigantic. It is an impiety for an actor to present us with Gandhi or Lincoln’s ‘true’ thoughts and feelings. A way to get out of this bind is by showing us Gandhi before he became ‘Gandhiji’, Lincoln before he emerged as the epitome of greatness. John Ford’s Young Mr. Lincoln (1939) and Shyam Benegal’s The Making of the Mahatma (1996) employ the strategy. Rarely has any film combined both sides of such a colossus – the intimate and the monumental – because they belong to different genres.
Spielberg’s film confines itself to a historic few months during Lincoln’s second term as President. Lincoln recounts his efforts, during January 1865, to obtain passage for the Thirteenth Amendment to the United States Constitution in the United States House of Representatives, which would formally abolish slavery in the country. Expecting the Civil War to end soon but concerned that his 1863 Emancipation Proclamation may be discarded by the courts once the war has concluded and the 13th Amendment defeated by the returning slave states, Lincoln feels it is imperative to pass the amendment by the end of January, thus removing any possibility that slaves who have already been freed may be re-enslaved. Since he is armed with huge powers because of the war, this is the opportune moment.

There have been many international films which deal with lives and events as important as these are to a nation’s history. As an example, the story of Joan of Arc, her successes, her trial and her eventual burning at the state have been the subject of great films by Carl Dreyer, Robert Bresson and Jacques Rivette apart from those by more popular filmmakers like Luc Besson and Victor Fleming. Since Spielberg’s film is taken to be so seriously by leading critics like Roger Ebert, it will be appropriate to compare its methods to those of the greatest films rather than works by less ambitious filmmakers. In Luc Besson’s The Messenger: The Story of Joan of Arc (1999), for instance, we see a cannonball landing inside a fortress with ‘Hello’ engraved on it. Since Jacques Rivette’s is the most political of the three films, Spielberg’s Lincoln should perhaps be compared to it.

Jacques Rivette’s Joan the Maid (1994) has, superficially, some aspects in common with Lincoln. There is no attempt to get at Joan’s psychology and there are hardly any private moments in which she emerges as an ‘individual’ with the freedom to choose her actions. Since nothing that Joan might ‘choose to do’ can have the smallest consequence upon her destiny, the film imposes a strictly deterministic viewpoint upon the unfolding events, which are enacted as a kind of cinematic theatre. The film begins by showing Joan’s feeble mother in a monastery relating what happened to her daughter but, rather than showing deep sorrow, the old woman delivers her lines mechanically – as someone exhausted by the act of recalling a painful past relived constantly. The emphasis is not on what the old woman ‘feels’ at her daughter’s death but on the effect of Joan’s travails upon her. The past is being viewed from the sidelines here, as it were, to allow for the subjective viewpoint necessary, but also making certain that history is not violated. In another crucial scene in which Joan is interviewed by French clerics who are gradually convinced that she can be trusted, the clerics conduct themselves as an interview board might, being inquisitive and exchanging glances and whispers but contributing to no psychological drama. Joan herself is matter-of-fact rather than inspiring – less like someone divinely guided than a young person facing an interview committee. The point being made is that while Joan’s true thoughts and feelings are not knowable, the circumstances of her life can be broken down to what we know from common experience. The past can be understood in the terms through which the world is available to everyone. Recognizing essentially the same thing, Robert Bresson’s Joan (The Trial of Joan of Arc, 1962) coughs at the stake from the smoke rather than cry out in physical or spiritual anguish. Choking from smoke is familiar in a way that spiritual anguish is not. If these films help us understand the extraordinary through the familiar, Spielberg’s Lincoln works differently.

Steven Spielberg abandons his tested filmmaking methods in Lincoln – especially his use of dramatic performances and close-ups to manipulate our emotions as in ET (1982) and War Horse (2011). He maintains his distance from Lincoln and that, even if it is not laudable in itself, is in the right direction. But after watching Lincoln for about an hour or so, one finds oneself wondering. Firstly, the characters are given lines which become speeches even when their import is slight. I am sure that people spoke in monosyllables – at least occasionally – even in the 19th Century but Spielberg will not have it that way. Secondly, the film contains little that is recognizable as ‘common experience’ because everything takes place at an exalted level. The locales, for instance, are almost always official spaces populated by great people debating profound political questions in long sentences. There is never any sense to be got that history might also take place in everyday spaces – later perhaps named or renamed by historians. More outrageously, there is actually a pretense that the Lincoln we see (Daniel Day-Lewis) is the real Lincoln because of the effort to make him seem ‘authentic’. The distance that Spielberg maintains from him aids this illusion. Further, we are made to understand him not through our own experience of the everyday but through Hollywood. To elaborate, Hollywood acting strives for transparency in character and films try to convince us that people are completely knowable by restricting their range of gestures, denoting only a few standard emotions. This is carried forward in Spielberg’s version of history and Lincoln’s face – as well as those of the others around him – registers only the emotions that Hollywood has rendered familiar to us. His instructive anecdotes, for instance, imply the earthy wisdom that a prophet from a De Mille biblical epic might possess and he composes his face accordingly. Lincoln’s surveying the dead after a battle is also so familiar that the ruse has been mimicked by even Mani Ratnam in Bombay (1995) – in the post-riot sequence involving the remorseful Hindu leader. But Spielberg’s innovation is that he catches these stale emotions only in long shot – since it would be impertinent to get close to them. The sense one gets is also that we are intended to witness history with awe and this is confirmed when there is no difference in register between the private conversations and the political debates. History, Spielberg seems to be asserting, is like a Hollywood drama except that is more distant and deserves more respect. In order to sustain this illusion, he casts well known actors like Tommy Lee Jones, who are deliberately made unrecognizable in order to make us believe that we are watching history and not film stars in costume. The moment chosen is important because it is the one which confirms the commitment of the US to equity.

If a film like Rivette’s Joan the Maid tries to get at artistic truth by acknowledging the impossibility of understanding the historical truth, Spielberg’s Lincoln erases the distinction between the two. People who have seen Lincoln often describe it as “history taking place before us” which should hardly be the response that great cinema elicits from its audience. History, in fact, cannot take place before our eyes because it remains interpretation. And the bigger the film and the more the production costs having to be recovered, the more hackneyed the interpretation needs to be in order to get widespread approval.
It is generally acknowledged that historical films, although they are about the past, principally address concerns of the present. There have been at least three major films about Abraham Lincoln and/or slavery in the past year or so – Timur Bekmambetov’s Abraham Lincoln: Vampire Hunter, Tarantino’s Django Unchained and Lincoln. Although this cannot be asserted with certainty, the Obama presidency may have something to do with it. Unlike the other two which are essentially playful films, Spielberg’s Lincoln is an effort made deliberately solemn in order to sustain a moral high. It is a smug, self-congratulatory film addressed to a public feeling particularly good at having elected a black president and it is making a mythical connection between the moment and Lincoln’s endeavors.

Thrissur all decked up and ready for IFFT 2020