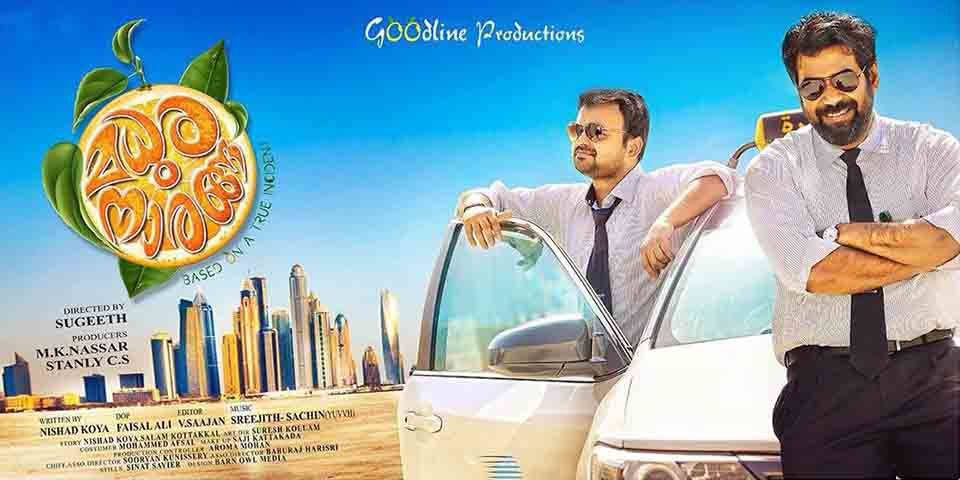 Human bonding is a natural virtue. It drives individuals of a society to altruistically sacrifice personal needs, safeties, and time for the good of the others within it. And, as ‘Madhura Narunga’ (Sweet Lemon) suggests, it is best manifested when people are on foreign sands and in dire straits.

The premise is as old as the desert. A sweet girl with nowhere to go illegally takes shelter with a trio of gentlemen with urges. Clichéd, undoubtedly, but open to a lot of possibilities; none of which is explored. The writer announces that he’s going through a creative block very early on. Love happens immediately. And till the half way mark, the four characters idle their time, waiting for the scriptwriter to crack some ideas.

Do not expect to get a sweeping view of Dubai, even though that is where a major part of the story is supposedly set. Most of this play takes place in the three bachelors’ quarters. And what a massive place with a nice courtyard and costly wooden doors it is. Taxi drivers and counter salesmen get paid in gold slabs, or what? You get to see a beach. And at the first opportunity, the romancing boy and girl start running on a hilltop and around trees.

Some of the shots of an actor’s frozen expression are prolonged to create a desired effect. But one wonders if the editor faced a shortage of footage; at times, some of the wide-angle images with three or four characters in the frame last almost up to half a minute. And that’s not the only cinematic crime that V Sajan, who has cut some notable films, is guilty of; he even resorts to gimmickry.

What a waste of three excellent male actors in their prime. Instead of putting them to good use, their dialogues too are drowned by loud music. The girl, a debutant, appears thrilled to have gotten the part; she’s still a little raw, but looks very much the type that is eager to learn. The intended somber tone of the film is achieved by some amount of all-round crying, rolls of hospital bandage, and Kunchacko Boban with a scarred face and an impressive disabled limp.

When fortunes fail, the feeling that comes of being surrounded by people with whom one has shared a happy time can be comforting.

Sugeeth’s slice-of-Malayali-life-in-the-Gulf romantic drama has him cozily united with the scriptwriter, cinematographer, editor, a lyric writer, and two lead actors of his roaring debut, ‘Ordinary’. What they lacked, surely, is a clever script doctor who would have taken one quick look at the writing and said: Look, all this phony coincidence and melodrama is fine, but where’s the gravitas?