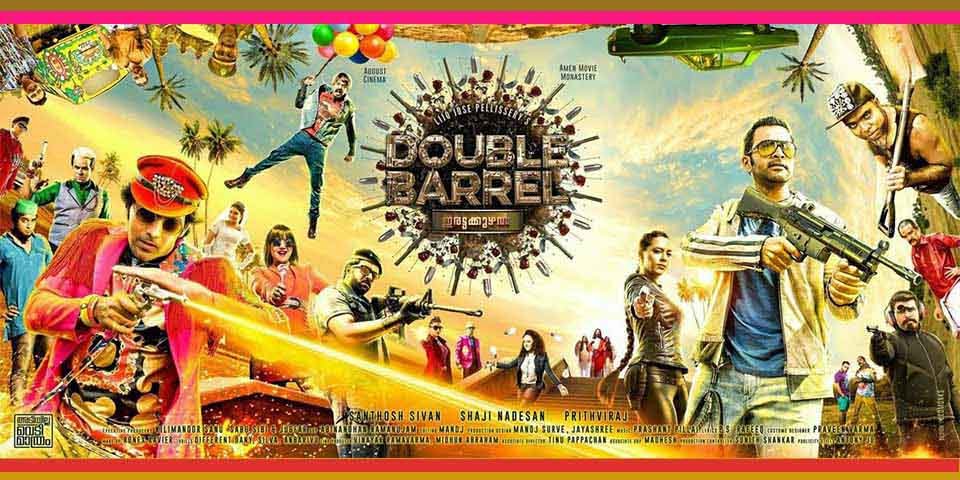 Filmmaking, in its finest form, is an art that employs visuals to tell a story. ‘Double Barrel’ is a visual extravaganza with no story at all to tell. It is simply bold and experimental, and, like the director’s ‘City of God’, is high on stylization steroids.

The scenes are lit up primarily in a puke-yellow tone. Of course, this changes. Sometimes to pink, to red, to blue, or a discordant blend of all of them. The costumes are outlandish; from Elvis Presley suits to shiny material in a mix of matchless colors that even circus jokers will not dare to wear.

In keeping with this offbeat mood, the cameras too take the liberty of capturing the subjects and action from a birds’ eye view, from low angles, and while ascending and descending from heights and from canted angles. A fisheye lens is used too to cause those parts of a person’s body that comes close to the camera to be a little bloated. Basically, anything to lend the canvas a weird look.

By abruptly changing the rhythmic pattern, the sequence of some of the images coupled with the perfect timing of the cuts ensures a kind of comic-book effect.

Sound too has been used wisely. An opera singer’s high-pitched voice (coming out from one of the side boxes) momentarily distracts two warring groups who are busily getting ready to massacre each other at close range.

Stocked with a vast library of mannerisms, Indrajith does a clowning bit using a fresh approach. Prithviraj joins him in monkeying around, temporarily, before falling back, understandably, on his usual macho act. The brothers share a wonderful rapport. They are supercool characters who from time to time, especially whenever guns are pointed at their heads, break into a 70mm grin, and laugh like a pair of jackasses.

Poor Aarya. His character falls in love with the corpse he’s been assigned to bury, and truly believes that she’s adoringly wrapped around his arms. How funny can any actor be, and for how long, when required to repeat the same gag, albeit, with slight variations, whenever he comes onscreen? Sunny Wayne as a cold-blooded sniper has a frozen face. Kudos to Asif Ali for allowing his character to be bullied and beaten, repeatedly, by the people in his own circle. I mean, how many micro stars on the rise have the intestines to play a weakling in an atmosphere that is supercharged with testosterone?

The other characters too are competitively bizarre. A five-year-old boy smiles cheerfully whenever he sees someone being riddled with bullets. A shy girl suddenly unfurls her long tongue. A man springs up from the floor and breakdances each time someone shoots him in the back. A couple finds themselves right in the middle of a gunfight just when they are about to make love; indoors, outdoors, or wherever. And a naked man covers himself with a tea tray while gunmen run past him outside his hotel door.

But what is the use? There is no plot. Instead, various sets of people move in all directions and keep bumping into each other. Everything revolves around this flimsy thread: someone has three priceless stones, and someone else is willing to buy it for a hundred crores. Nothing is particularly clever about the dialogues. There appear to be no references or allusions. And of the many attempts at wit, a substantial amount falls flat. The best of the talking is done through gunfire.

The Tarantino influence is evident everywhere. But like the colors, the genres change too. A few scenes have a Mafiosi gangster feel. In another few, the famous brothers turn into Kung-Fu masters. Sometime later, an Eagle glides across the sky, and the landscape and the music-over reminds you of the old Spaghetti Westerns. Much later, a battle-crazy dirt gang emerges. It almost seems, at times, as if the filmmakers were simply on a freaking trip.

What was Indrajith thinking when he signed up for this? He’s a very intelligent fellow who has publicly stated that he would take up only sensible subjects. What was August Cinema thinking when they staked their money and name on this? The company has built a reputation for producing/distributing meritorious films. And what was Lijo Jose Pellissery thinking? He has made three films before this, all of which have a certain something.

Did any of them actually believe that they could thrill and entrance audiences for over two and a half hours with nothing but explosive madcap action; glaring colors; and spectacular, psychedelic images! Really, what was their intention? Were they simply trying to be different for the sake of being so?