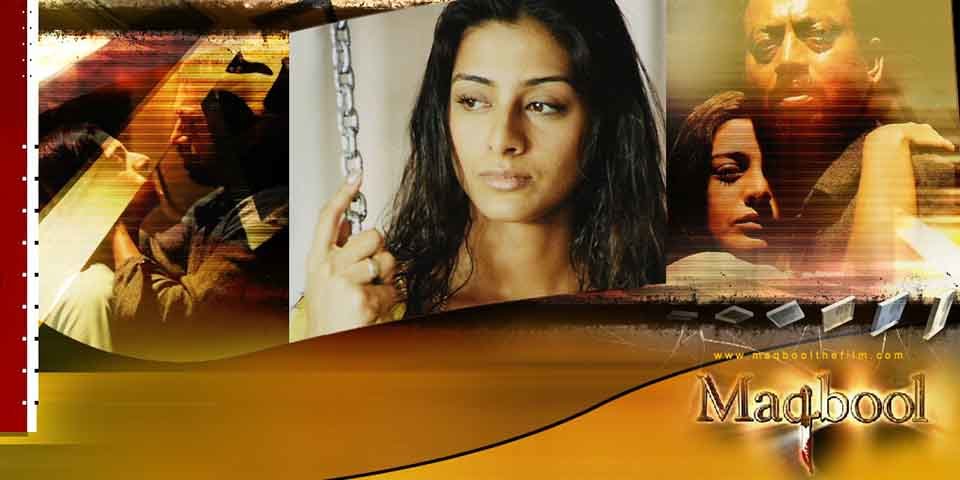 Maqbool shows how a comprehensive film script, smart photography, and good casting can turn a low budget film into reasonably good cinema. Vishal Bhardwaj has grown leaps and bounds as a filmmaker. Maqbool is a clear proof of that. It is a good film. It should be a lesson to filmmakers like Santoshi and Ram Gopal Verma who have been churning out over hyped, star studded, Hollywood-inspired shit day in and day out.

You do not need loads of money and big stars to make a good film. What you need is a good story developed into a comprehensive script, appropriate characterizations, a set of hard working actors, a cameraman who has a good sense of composition, and a fearless director who stays true to his script till the end and who treats his producer’s money as his own and refrains from splurging it on useless dance numbers. Above all, you need a producer who has full faith in his creative team.

The success of films like Maqbool is much needed to break the stranglehold of star system, and of those who owe their survival to the Indian film industry. It is the star system that sustains directors like Santoshi.

Maqbool is a story that has been adapted beautifully. We have seen English films based on Shakespeare plays. They are generally very boring. A film like ‘Romeo and Juliet’ was an exception. However, it suffered from over stylization and an overdose of cinematic wizardry. This reviewer presumed that Vishal would probably do the same with Macbeth. His earlier TV and film work can be termed as amateurishly stylized. Maqbool turned out to be a huge surprise. It is a film made by a maturing filmmaker. There is a more precision here than what we have seen in ‘Makdi’ and and sundry TV work done by Vishal. Maqbool has very few wasteful scenes. The story is told in a straightforward and comprehensible manner. Implausibilities and clichés do remain here and there but there is something in the film that makes them look inconsequential and that is Tabu’s performance.

Tabu has given her best performance to date; at par with some of the best portrayals of her aunt, Shabana Aazami. She has more or less lived the character. If there are flaws that remain, blame it on the director and the writer. It is not the footage of her role that dominates the film, it is her performance. She has come of age as an actress. She was all right in ‘Chandani Bar’. It was an author-backed role. She had smart dialogues to deliver. In Maqbool, she has a role that cannot be propped up by bold dialogues alone. You have to ‘become’ the character you are assaying. Tabu becomes her character Nimmi. It is an inspired performance. Irfaan is his usual self. He is an actor who cannot go beyond his personality. His personality fits into the role of Maqbool. That is all. Pankaj Kapoor is good too. So is Piyush Mishra. They are all limited by their personalities and attitudes. They do not go beyond themselves. The credit for their performances should go to Vishal’s casting and characterizations.

The master stroke: having two Brahmin cops as sutradhars, one of them being an expert astrologer. After a long gap of time, Naseer and Om Puri have acted together. They are always good. Naseer’s ‘choti’ and bushy moustache is just perfect for his role. You enjoy watching the duo. It is very real. For these cops, survival is more important than ideology. They are intelligent, cold blooded, and humble. They can take insults. They are ever watchful. They are not loud but they are lethal. They exist in the police force. Prakash Jha also had a character like them in his ‘Ganagajal’. These are the kind of nuances someone like Rajkumar Santoshi cannot comprehend even while making a film on cops.

What could have turned the film into a classic? A little more work on the script could have worked wonders. However, it is this little that differentiates a master storyteller from someone who is working at becoming one. Maqbool should have been given some really solid reasons to betray his benefactor. It could have been anything. The struggle that was going on within Maqbool could have been underlined. His affair with Nimmi seems to be the sole reason for his betrayal. Tabu has to do very little egging on to get him to act. This was the backbone of the story. It should not have been allowed to be so weak. It compromises the integrity of Maqbool’s character as well as the film. It needed a lot of development. Why should Maqbool fall for Nimmi? What is this relationship giving to him that he does not have? Nimmi is not shown to be feeding his ego. She has her own problems. Is she ambitious? Is she angry? It does not seem so. She looks more like a woman in love with a man. She does it well. If she nurses extreme hatred towards Abbaji for some reasons, we do not find an evidence of that in the film. This is a major flaw.

The film could have dwelt more on these aspects instead of showing oft repeated underworld drama. We should blame ‘The Godfather’ for that. Vishal has not been able to avoid the pit young Indian filmmakers keep falling into whenever they take up stories connected with the underworld. The effect of Tarantino, ‘Seven Samurai’ and ‘The Godfather’ on Indian filmmakers has been extremely negative and highly destructive. Irrespective of such flaws, Maqbool is a sensible film.