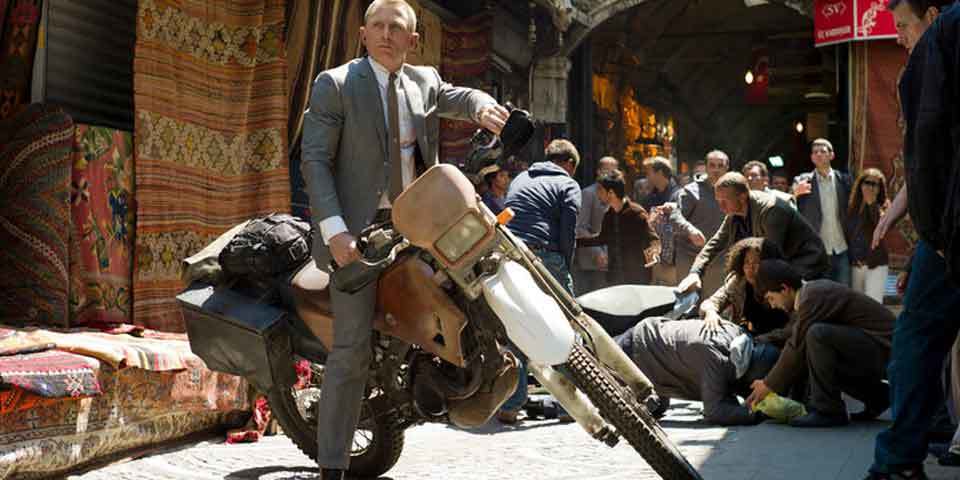 Sam Mendes’ Skyfall, it seems to me, is not only the best James Bond film hitherto but is also conceived as that last one – although commercial considerations could see the series continuing. It is beset by a deep political melancholy which takes it to a level not attained either by the James Bond films or the director Mendes (best known for American Beauty – 1999). This being the case, any reflection on the import of Skyfall should take into account the history of James Bond. Most facts about Bond’s trajectory in cinema are well known. He began (at least in Ian Fleming’s novels) as a response to the Cold War and his initial enemies were from the Soviet Union – viz. SMERSH, which is still invoked in From Russia with Love (1963). With the arrival of détente however, Bond’s principal adversary became SPECTRE, an international organization committed to dominating the world by bringing the superpowers into armed conflict. Although SPECTRE disappears from the films, this motif continues even in Tomorrow Never Dies (1997) in which the villain (a media tycoon modeled on Rupert Murdoch) attempts to trigger a war between Britain and China.

James Bond represents the last vestiges of the British Empire and, perhaps as a concession to it, he is the only non-American allowed to crash through intimate spaces and destroy property across the globe, casually. Jason Bourne sets off explosions and enters private houses as though Tangier or Venice is in his own backyard and this finds correspondence in the American view of the world. But a French agent or an Indian one (like ‘Tiger’) must treat the rest of the world more cautiously, respect foreign property and confine himself to public spaces when outside his own country. James Bond may be the only non-American allowed these distinctly American liberties but, as Britain’s political importance declined, Bond’s conduct still began to lose its assurance. A visible sign of the decline was that Bond was dealing with few credible adversaries. The profligacy of the James Bond villain signals a lack of conviction that any international criminal interest would find Britain a grand enough target. Britain is not the equal of the US and the term ‘cousins’ used by Bond’s associates to denote the CIA is even presumptuous. The relationship between the two countries is so skewed that Polanski’s The Ghost Writer (2010) could portray the British Prime Minister as a CIA operative, with his own wife as his ‘handler’. Since the enemies of the western world cannot make Britain their principal target without compromising their own worth, the Bond films moved into a territory close to self-parody. Roger Moore and Pierce Brosnan mark this phase and James Bond relentlessly mocks Britain’s pretensions until a credible foe arrived on the scene, which is global terrorism. The self-mockery perhaps reached its zenith when John Cleese played ‘Q’, the technology expert of the Secret Service in Die Another Day (2002).

Global terrorism, being only the other side of global enterprise, involves every nation and James Bond had finally found convincing adversaries. Instead of dealing with rogue tycoons intending to destroy Istanbul to bring up the value of their oilfields (The World is Not Enough – 1999), he began to deal with financiers funding terrorism (Casino Royale – 2006), taking them more seriously because they were also more real. It is the credibility of Britain’s foes that, ultimately, imparts gravity to Daniel Craig. But the gravity also derives from an uncertain condition of permanent war with an unknown foe, not single but numerous. The uncertainty is so intense that when Bond delivers his trademark punch line, “The name is Bond, James Bond,” at the end of Casino Royale (2006), he says it to a peripheral character that we don’t even recognize – instead of an arch-enemy. Coming from an emblem of Western confidence like Bond, this is so bleak that it might even have been written by Harold Pinter.

Global terror appears the catch phrase in Skyfall initially but the plot of the film soon zeroes in on the doings of British Intelligence (MI6) – instead of focusing outwardly on Britain’s enemies. The film begins, as always, with an action sequence, this time in Istanbul. A British agent has just been killed and a computer hard drive has been stolen. The crucial information passing into enemy hands pertains to the secret identities of NATO agents in terrorist organizations. Bond has an associate Eve and, when he seems unable to subdue his quarry atop a speeding train, she is instructed to take a shot and the already wounded Bond is hit, falls into a river and is presumed killed. But Bond does not die, remaining behind in Turkey although his funeral is held and his obituary written by M (Judy Dench).

In London, MI6 soon learns that the loss of the hard drive has repercussions. There was not even supposed to be such a list and M is answerable to NATO. She is asked to retire by the Chairman of Intelligence (Ralph Fiennes) because of the scandal, but she cannot bequeath a tainted legacy to her successor. At this point, there is an explosion at the headquarters of MI6 in London and several operatives are killed. M’s own computer has been hacked into. This brings James Bond back to London because he can no longer be removed. The mastermind behind the theft now puts up five of the secret identities on the net and three agents are liquidated immediately. Five more will be put up each week, is the proffered threat.

We have not yet been let in on the conspiracy in Skyfall and we only know that the mastermind Bond is up against is a cyber-terrorist. Bond now cuts into his own shoulder wound, recovers the shrapnel embedded in it and MI6 is able to track down the man who shot Bond in Istanbul – a mercenary now traced to Shanghai, where he is due to carry out an assassination. It is only after Bond liquidates him and establishes contact with the man’s female associate in Macau that the conspiracy at the heart of the story emerges. The villain is a man named Raoul Silva (Javier Bardem), a former British agent in Hong Kong and, once, a favorite of M’s. Silva exceeded his brief against the Chinese, was ‘betrayed’ by M to them and tortured. All he wants now is revenge against M and the institution she heads.

It is significant that there is no global conspiracy at the heart of Skyfall and this can be understood as an admission that Britain is not a significant enough adversary for any ambitious global criminal. The villain Raoul Silva having no plans for ‘global domination’ but merely wanting to avenge his betrayal by his former employers is such a modest ruse that James Bond may even have moved into John le Carré territory. M and Bond are, in effect, reckoning only with their own pasts instead of deciding upon the future of the world.

Skyfall chooses ‘technology’ as the issue it is covertly aligned against and the sense to be got is that Bond’s adversary is better equipped than MI6 is. When Q hands Bond his customary equipment, all he gets are a Walther PPK and a miniature radio. He is also told that ‘field duty’ is out of favor and the most useful work is done sitting at desks behind computers. The general sense is of Britain no longer having technology at its command because technology has moved away from the mechanical device (cars, guns and gadgets) to electronic ones (computers, the web and telecommunications) in which the British have little expertise. It is only right that when Bond and M finally take on Raoul Silva, it is in the wilds of the Scottish highlands – far away from all technology and with only ancient hunting rifles and knives to protect them. ‘Skyfall Lodge’ is the place in which Bond spent an unhappy childhood and that is where the climax happens. All this makes Skyfall political in a way that the James bond series has not previously been. The film is a dirge for the British way, the moral tenacity that Britain prided itself for, the qualities that her politicians (lampooned in the film) made a mockery of, especially under Tony Blair. Before M is killed at Skyfall Lodge, the villain insinuates that she has been like a treacherous mother and entreats her to put a single bullet through both their heads. M’s legacy for James Bond, as is most appropriate, is a British Bulldog of porcelain, to remind us of Winston Churchill, whom the film apparently holds up as Britain’s last great leader.

In Skyfall James Bond not only maintains his distance from women but a homo-erotic attraction is suggested between him and Silva. Since glamorous women in the James Bond series were primarily a distraction to keep us from discovering each film’s lack of faith in its own political rhetoric, eschewing them is appropriate for a film sincere in its political beliefs. But the relation between Bond and Silva is more intriguing and the bonding between them may owe to their being the ‘betrayed children of a treacherous mother’. At one point in Skyfall, it must be noted, James Bond thinks of M as a ‘bitch’. The difference between Silva and Bond is that while Silva seeks retribution, Bond remains committed to M and Britain. But M must die and this is perhaps Silva having his last wish fulfilled. M, simultaneously, is herself, the Service and Britain and that is why she is completely ‘Mother’. M’s death makes Britain another country – like any other in the world. My own sense of Skyfall is that it is a conservative lament for Britain’s moral decline.

To conclude, Skyfall brings together the best ensemble performances in any James Bond film. For the first time we don’t see the others as bit players dancing around an infallible protagonist but as people in their own right, professionals confronting each other but nonetheless tragic elements within a single diminished structure. Daniel Craig is the best Bond ever, making the character flesh and blood as he never was. Judy Dench as M was never appealing because she exuded too much phony authority but here she emerges as vulnerable and on the brink of a collapse. I have always found Ralph Fiennes (Schindler’s List, Spider, Red Dragon) unbearable as an emblem of derangement because these roles rely too heavily on his facial appearance. Skyfall puts aside his physiognomy and he emerges as a wily individual but still someone deserving Bond’s respect. Javier Bardem is initially too genial as Raoul Silva but the film has a staggering moment when Silva reveals the abject horror at the core of his being. The factors just enumerated demand that we take Sam Mendes’ Skyfall much more seriously than we have taken any spy film in the recent past.

The Cabin in the Woods