Factual ERRORS in ‘The Oxford History of World Cinema’ 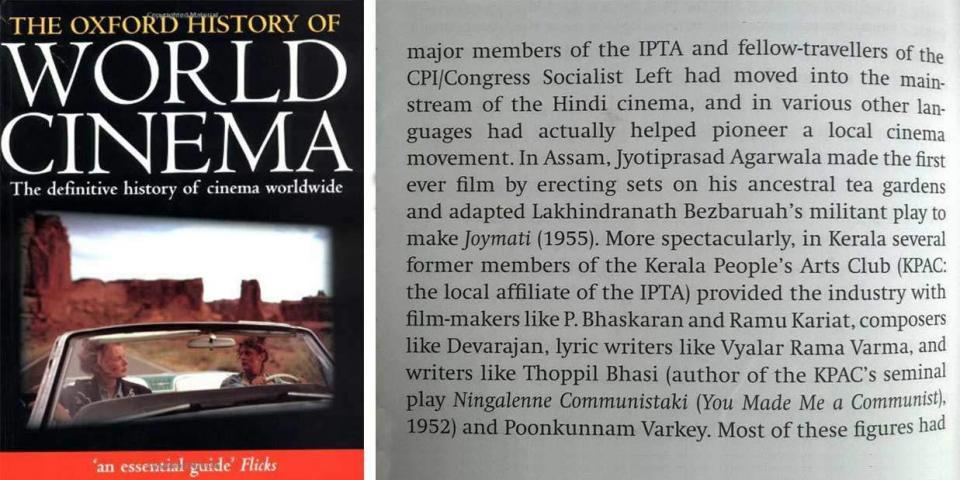 The Oxford History of World Cinema‘s promotional page at Amazon states that it “is the most authoritative, up-to-date history of the Cinema ever undertaken.” Really??? More research, please! It’s always a great idea when doing research on Indian cinema to get Indian film critics/scholars to review your chapters on Indian cinema, prior to publication.

I was disturbed by Noni’s post on the disinformation about Jyotiprasad in a prestigious publication. Jyotiprasad was a PIONEER OF INDIAN CINEMA who worked in the early 1930s in the godforsaken Northeast India. True, we do not have proof of his works, except for some clippings, but there are written records about and criticisms on his films and his own notes on films where he made very correct critical assessment of Hindi and Bengali films of his times. Even Altaf Majid once wrote in an article that Jyotiprasad’s cinematic thinking and film persona flourished in Hitler’s Nazi Germany. This is totally incorrect. Dr. Gohain was quite rankled by such disturbing insinuation and rang me up to ascertain the truth. Jyotiprasad left Germany in 1930/31, much before Hitler’s rise to power. Kracauer analyses the decline in the political culture of Germany as reflected in the history of German cinema in “From Caligari to Hitler.” German cinema turned away from realities depriving audience from understanding the social realities of the time, which later prepared the field for Hitler to annex power. Contrary to German expressionism, Jyotiprasad’s film sense was rooted in a distinctly clear understanding of history as well as social reality. It is time people in authority knowing Jyotiprasad care to have a look at the said publication and make them rectify the gross mistake committed.
Apurba Sarma, National Film Award winning film critic/scholar, from Assam

This reminds me of a seminar in early nineties on some aspect of Indian cinema at IIC, New Delhi.Filmmaker, Mrinal Sen was one of the speakers in the seminar. Now, I do not remember exactly what Mr. Sen said, but the essence was- in some encyclopaedia on world cinema, he was described as a surrealist filmmaker with some odd explanation. This is what happens when serious research is replaced by lackadaisical works. I think, Jyotiprasad’s own films are enough to know his thoughts on cinema. He was rooted in the social reality of Assamese society and its cultural milieu. I am sure, if pointed out, OUP will correct the factual errors in the next edition of the book.
Paresh Malakar, Former Regional Director at Scholastic India

ബിജു, Yes I am also like Action Hero Biju!!!