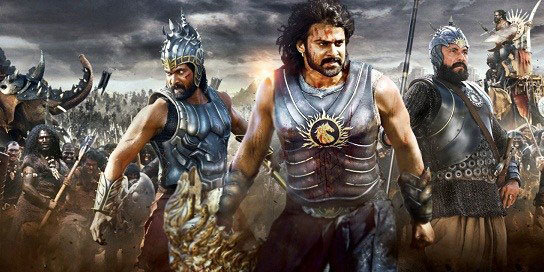 Baahubali 2: The Conclusion. Answers the burning question: Why did Katappa kill Baahubali?

“The scale and sweep of the no-holds-barred fantasy epic set in a spectacularly garish fictional kingdom are expectedly phenomenal. It is the riot of colours, the robotic action, and the resultant kinetic heat that are a strain on the senses. They suck the air out of the nearly three-hour-long film and turn it into a limply mechanical show of superficial wizardry.”

Rating: TWO AND A HALF stars | Full review


Saibal Chatterjee, NDTV
“Grandeur remains the backbone of this spectacular outing in which love, loyalty and loss are vying for undivided attention… Replete with conspiracies and machinations… Works on the formula of excess… Perfect example where form becomes more important than content.”


Lopamudra Ghatak, Economic Times
“A game changer. Years from now, filmmakers who dream big but shy away from taking that leap of faith will probably draw strength from the work of this team… Ever since we saw Devasena in part one gathering twigs for a funeral pyre we knew what’s in store. But within that framework are sequences that warrant a suspension of disbelief and an intriguing match of wits.”


Sangeetha Devi Dundoo, The Hindu
“The fact that both Baahubali films are riveting and enjoyable should act as a wake-up call for some Indian filmmakers, especially those known for making tedious actioners… Even the action sequences are laced with reasons. “


Tanul Thakur, The Wire
“The pitch at which the declamatory dialogues are delivered is deafening: there were times I felt like closing my ears… Leaving the theatre, you can’t help wishing that Kattapa had killed the fellow earlier.”


Shubhra Gupta, Indian Express
“For a film that’s highly invested in ritual and tradition, it is perhaps revealing that when Baahubali 2 wants to make a point about valour, it reaches for the grammar of the caste system. “

Loev is now on Netflix