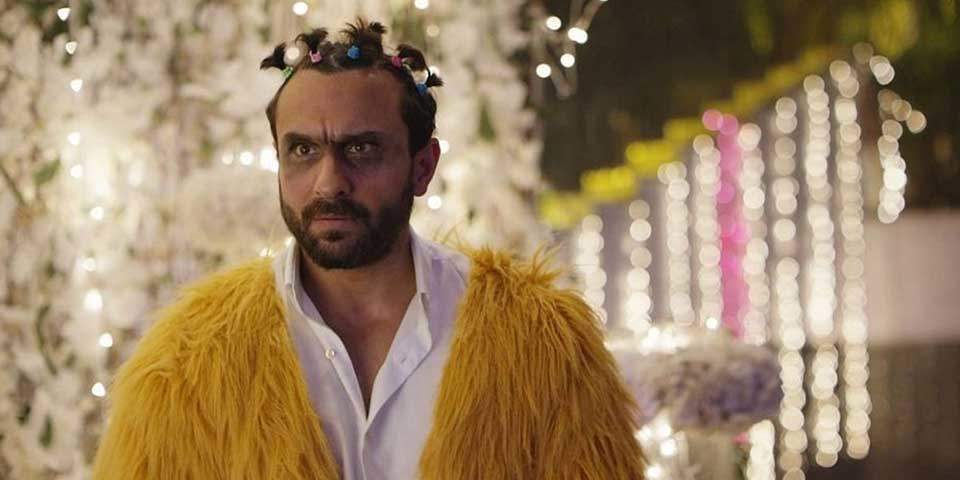 In Kaalakaandi, a nice boy gets told by his doc that his time is up. Sad, the fella decides to taste the bad things in life before he kicks the bucket.

“Excruciating… Kaalakaandi made me wonder if Delhi Belly might be another instance of the famed “Aamir Khan touch,” where people who make good-to-great films under his aegis end up bombing outside. Now, that’s worth a  fucking thought.”

“Is it as good as Delhi Belly? As a script? Possibly. As a film, I felt it lacks rhythm, with too much being force-fed to suit the timeline of one never-ending night in Bombay, even if that’s the genre… I’m not complaining at all.”

“Verma is fascinated by mavericks and misfits… Armed with the quality of his writing, he turns the freaky, freewheeling, fizzy Kaalakaandi into a human drama that explores life’s surprises, love, mortality, greed and betrayal.Not all of it adds up as neatly as one would have liked, yet it works. Wicked wit and macabre humour leavened with a sense of humanity define this dark comedy’s more felicitous moments.”

“Three stories take us to three different worlds of Mumbai. Bursting at the seams, the city, where you are happy to be just another brick in the wall, proudly flaunts its quirks and screwballs at night. But, however harsh and looming it may look during the day, Mumbai is mellow and kind in the dark.”

“Hard to believe that a film directed by the writer of Delhi Belly is, for the most part, a drag. Despite Saif Ali Khan being in cracking form, Kaalakaandi lacks fizz and purpose.”

“Good situational comedies are born out of tragic beginnings. Here, we have four such desperate – and plausible – sets of circumstances that it’s only natural to expect their very next decisions to kick-start a nutty, interconnected single-night saga of orchestrated chaos… It is more of a multi-narrative drama that hides beneath the generic darkness of the city it occupies: a comedy made with the sensibilities of a tragedy”.

“Mumbai has never seemed duller by night than in Akshat Verma’s debut feature Kaalakaandi. Reports of the city’s imminent death do not seem exaggerated after all, and it takes drugs, apparently, to unleash its congenital insanity and unerring ability to lay waste the best-laid plans. Or, it could simply be that Verma, who wrote the magnificent Delhi Bellyin 2011, didn’t think his screenplay through enough.”

“Saif Ali Khan makes the most of his part, even though you wish it had a little more heft. Still, it’s good to see a performer with innate style and panache working in tandem with an ensemble.”

“Trippy, cheerfully absurd and in places, laugh-out-loud funny… There is no star vanity here or any fear of damaging an image. With his hair in a multitude of mini-ponytails, wearing a yellow fur jacket, Saif is fearless.”

“Kaalakaandi takes off in the fifth gear and doesn’t seem to stop… Amid whimsical and absurd scenes, rippling with humour, the film throws some unexpected moments of tenderness, slowly rising above its material.”