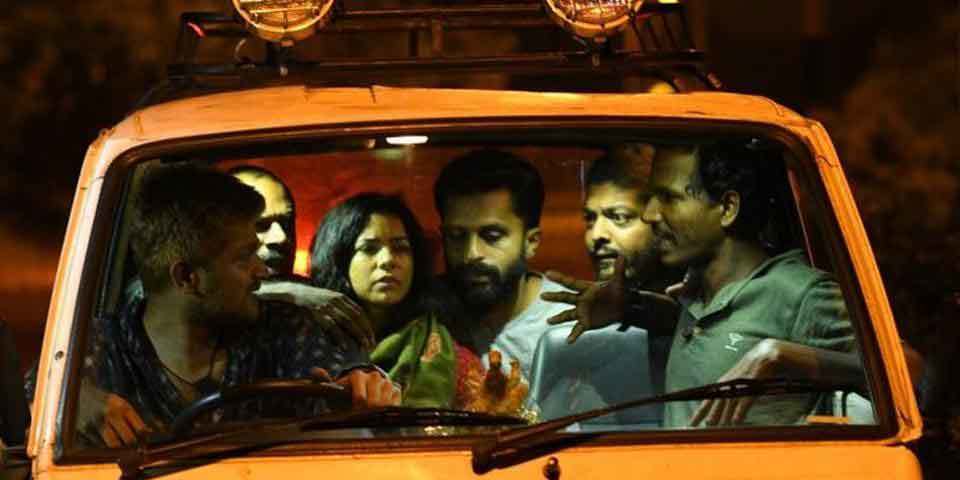 S Durga “takes you on a night ride with the beasts that assume human shapes”.

WINNER, Tiger Award
Rotterdam International Film Festival 2017
“For its daring and resourceful approach in creating a mood of constant tension, providing an insight into multi-layered power dynamics of gender, class and authority.”

The Hindu has initiated a poll: “Film buffs have put together a grass roots movement for controversial film S Durga’s commercial distribution, release, and exhibition. Is this a viable way for Indie films to find space in theatres?”

Review of S Durga in Hollywood Reporter and in Variety

“The kind of film where its impact hits you when you are back home and stop to wonder what the heck all that was about. Sasidharan manages to impart a substantial amount of social commentary, skewering religion with great delight, complete with blaring death metal music and face masks that represent the devil. F*ck God, the film says, jump on board and ride with the devil. In a world where humans have degraded themselves to a vastly dangerous and demeaned species, who only use religion to commit atrocities, you are better off siding with the princes of darkness.”

“S Durga is a road thriller but it uses the genre’s plot devices and the intensifying, claustrophobic rhythm of imminent threat to a different effect. Here the fear, the possibilities, the anticipation of the unknown generates a foreboding that’s scarily real.”

“Cleverly portrays how baffling male egos can be – the eagerness to be protectors and guardians, and how society blindly approves of this bloated machismo… Cinema isn’t dying in this age of show of opulence and flashy modern technology; it is just discovering new styles of narration to stay afloat and emerge stronger than before.”

“Neither preachy nor propagandist but a brilliant portrayal of an unfortunate social condition and an exploration of the visual language.”

“A stunning piece of cinema that forces the audience to re-examine the world of fear, claustrophobia and animalistic viciousness that surrounds women.”

“The cinematographer (Prathap Joseph) goes with the couple’s fears and insecurities capturing, not the outside world that creates these negative thoughts but the emotions that flow from within the couple as they try to remain calm under stress.”

“A political statement, questioning the hypocritical nature of patriarchy ingrained in the society we live in… Cinematographer Prathap Joseph explores a wide range of angles. But he refrains from close-ups or extreme close-ups to convey the fear on the face of the protagonists.”

“Sanal Kumar Sasidharan uses his obsession for long single takes to make the experience absorbing and intense. The camera pans away from the interiors of the car to the scary and lonely darkness of the road.”

“With spontaneous dialogues and the night as the backdrop, S Durga offers a slice of reality, rather than a formulaic story.”


Asha Prakash, The Times of India

“In crafting a terrorizing film that takes you on a night ride with the beasts that assume human shapes, he has… compellingly stripped a stained society of its genteel masquerade and makes it stand stark naked before you, unleashing the uncontainable fiends that wordlessly roam within.”