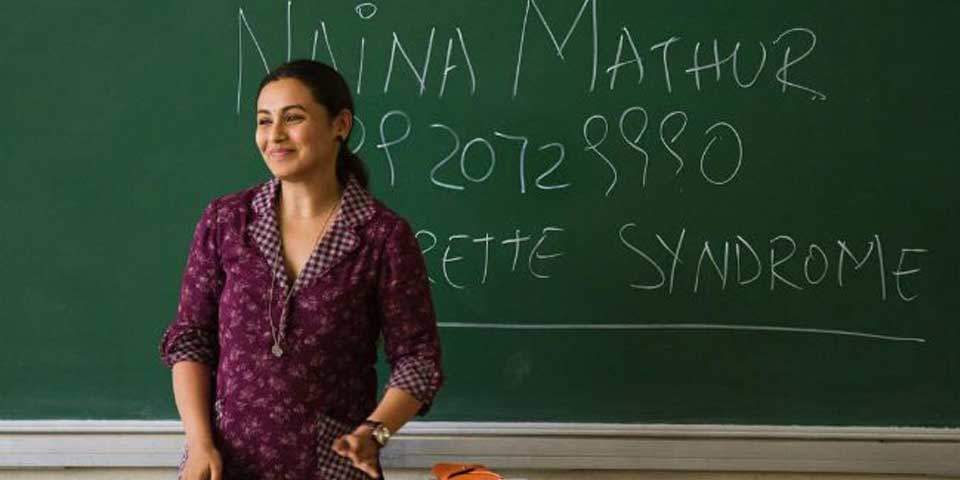 “Front of the Class, a Hallmark Hall of Fame movie shown on CBS in 2008, was viewed by over 12 million people. The movie is based on the true story of Brad Cohen, a young man diagnosed with Tourette Syndrome, who defies the odds, to become a teacher. Ten years later, it is coming to Indian screens as Hichki (hiccup)… Rani Mukerji, the lead actress has given Brad a sex change make-over by appropriating the role…

…When Brad was growing up, teachers and other adults—even his father—interpreted Brad’s involuntary sounds and sudden jerking movements as attempts to get attention or simply acting. He was ridiculed and teased by other kids. As a result, he hated school… until a principal learned his “acting up” was a result of Tourette’s…

…Brad said that he was in constant touch with Rani and Siddharth and that he loved the trailer. Some media-persons wanted to know whether Brad had seen the film yet. “No. Not yet. I am looking forwards to seeing it,” he confessed. “We’ll correct that very soon,” responded Rani and went on, to show us some scenes wherein she replicated the ‘tic’ which characterises Tourette, including the cupping of the lower jaw on the reverse of the palm, and the noises, which, in the scenes shown on video, sounded like “chey, chey” (those who suffer from the Syndrome make barking like sounds too, which punctuated the Skype screen at the venue every time Brad spoke. We, in Mumbai, were connected to the US with a video-conferencing unit that held-up well, doe almost the entire evening, except for a few hiccups in picture and sound, due to connectivity problems…

…Brad.. received both a Master’s Degree in Early Childhood Education and a Specialist Degree in Leadership and Administration. He has been featured on Oprah, CNN, Inside Edition, People Magazine, The New York Times…”

“A teacher throws eggs at an unruly class of schoolchildren. The kids are understandably taken aback by this sudden outdoor circusy… The taming of an impossible class is a subject overused in cinema, but it works primarily because of some ingenuity in the way facts are presented – to the classroom and to the audience. In Dangerous Minds, Michelle Pfeiffer used karate to impress the students and Bob Dylan lyrics to get them into poetry; in Dead Poets Society, Robin Williams made the boys stand on desks to look at the world from a different angle. Mukerji and her eggs don’t quite make the same impact.”

“The teenaged kids in Hichki are credible, especially the one with rapping skills… But when the script supresses their spontaneity to force down a done-to-death cycle of tantrums, melodrama and collective redemption, the films collapses beyond repair.”

“People who face nastiness from others can in turn be nasty to those less fortunate than they are. Hichki may not have the heft of Iqbal but it is a valuable reminder, through the vehicle of the Naina-Aatish equation, that prejudice is not justified simply because the person at the receiving end is flawed. It is also, of course, about not giving up on a human being if you spot redeeming values beyond their jagged exterior.”

“Disadvantaged students, idealistic teacher: if you’ve seen To Sir, With Love or Dangerous Minds or Short Term 12, you’ll have a fair idea where this is headed… Hichki often comes across as parachute filmmaking—dropping in on a problem just long enough to prick the viewer’s conscience and make them feel like they’re watching something meaningful, but avoiding any sort of meaningful engagement.”

“Hichki is no Dead Poet’s Society, but there are scenes that will remind you of Robin Williams’s Mr. Keating and a class that saluted him with “O Captain! My Captain!””

“A good teacher can change your life. The movies have always understood that. Think of the long tradition of the teacher film – Taare Zameen Par, To Sir, with Love, Good Will Hunting, Dangerous Minds, Dead Poets Society, Black…  Teacher films generally follow a set formula, which positions the teacher as a redeemer who unlocks the hidden potential of his or her students. Hichki is no different except here, the teacher is also struggling with her own hurdle… Hichki is a genuinely earnest film made with heart. But it doesn’t take enough risks and consequently doesn’t touch a raw nerve in the way that Taare Zameen Par did. But it’s always nice to see a talented actress with all guns blazing.”

“Centered on the pitfalls of the Indian education system… The film is often torn between educating and education. Are we to embrace the conflicts of Tourette’s through a done-to-death school story populated with villainous professors and PSA chalk metaphors, or are we to address the traditional stubbornness of the Indian teacher-student dichotomy through our flawed perception of disability?”