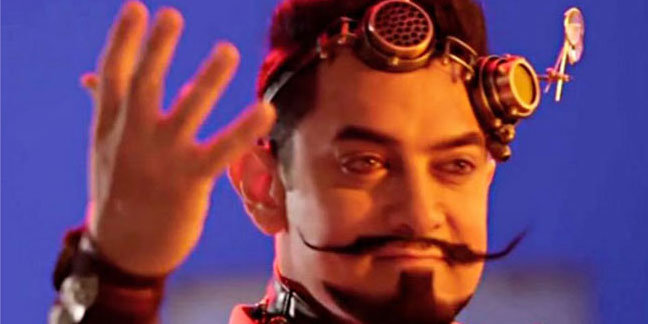 In ‘Secret Superstar’, a teenager wishes to be a singing star. But her conservative father will beat her black and blue if she’s caught pursing this line. Thankfully, she has the full backing of her mother; and Youtube and a burkha allows her a chance…

“In the 1995 blockbuster Dilwale Dulhania Le Jayenge, the mood of the house changes as soon as its patriarch (Amrish Puri) rings the bell. Before that, it was alive with Western music, with the girls dancing with each other, and their mother breaking into a twist in the kitchen… A diametrically opposite scene, imbued with similar themes, appears halfway through Secret Superstar, when the patriarch of the house leaves for work.”

“Overcoming stronger obstacles makes for stronger characters. But here everything appears too predictable… Leaves you a little frustrated as it had solid potential to be a cracker of a film.”

“Cheerful, feel-good imagery of a rotten reality… Zaira Wasim is an absolute wonder… She effortlessly conveys the strength of a single-minded artiste, the temper of a hurricane holding back, the impulses of free-spirited adolescence and the guts of a girl who knows who she is.”

“It is such a delight to see a 15-year-old look and feel like a regular teen, dealing disarmingly with first crushes and strumming a guitar properly, and not a painted doll.”

“A simple film that is unashamedly saccharine and manipulative, yet has the ability to surprise us in ways small and large.”

“Feels micro-engineered for emotional impact, down to the last sad violin on the soundtrack.”

“There are far too many turns in this film that defy logic and render the narrative clichéd and stereotypical. While ‘Secret Superstar’ might have had the good intentions of showcasing Zaira Wasim’s talents as an actress, it clearly does disservice to the craft of filmmaking in the process.”

“On one hand Secret Superstar gives us a cliche character of a feminist lawyer who is sour and preachy, on the other it gives us a warm, normal, loving mother trying to nurture her daughter’s dreams while presenting herself to a husband who’s given to ritual thrashing… It’ll make you see some things a little differently.”

“An inspiring journey towards empowerment, a case for pursuing one’s passion against all odds, a testament to the deep mother-daughter bond, and a convincing depiction of teenage years.”

“At the core of it… the film… centres on the amount of care and support it takes to bring up, or nurture, a defiant genius—almost like a delicate plant. Clearly that extreme love and empathy starts from the few good men/women in a society, who believe in you (some you know, many you’re lucky to have met).”

“At some level, the story plays out like a fairy-tale. Yet, it so distinctly belongs to the times we live in, when the world wide web can catapult people to overnight stardom.”

“Loved Aamir’s cameo in Secret Superstar, where he plays the creepy, washed-out music composer Shakti Kumaarr, whose mojo is the absolute belief all women on the planet want to sleep with him; he calls them ‘Babes’. The scene where he hits on his wife’s divorce lawyer’s receptionist—pure gold. Only Aamir can pull it off in the Age of #metoo, making growling noises at the receptionist while scratching his groin. Aamir reminded me of the Fellini masterpiece, ‘City of Women’, where the legendary Marcello Mastrioanni, playing the womanizer Snaporaz, accidentally wanders into a feminist convention attended by scores of women who judge and torment him; he is eventually tried for his masculine crimes. Am dead sure Aamir was watching this film during the shoot.'”
Shubho Sengupta, Adman who loves to cycle

Film Bazaar at IFFI 2017 closes with a grand awards ceremony