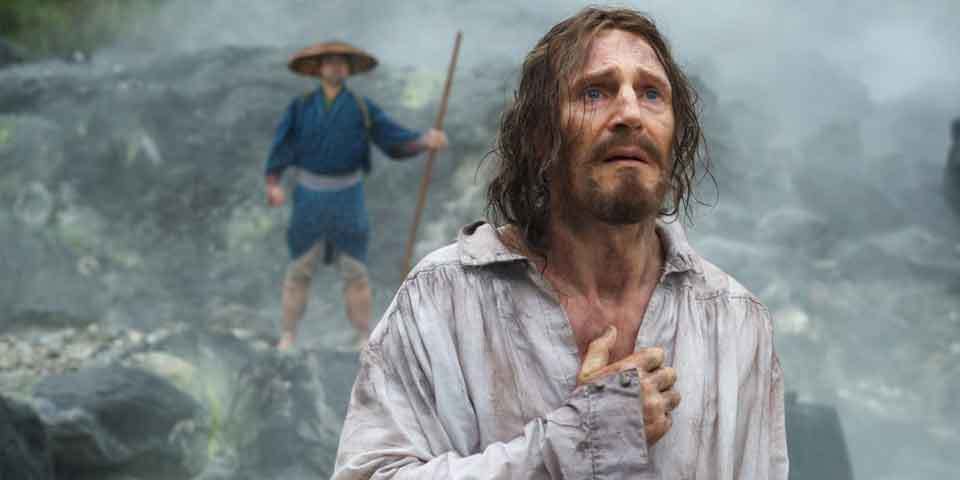 In ‘Silence’, a 17th century Portuguese Jesuit priest (Andrew Garfield) receives word that his mentor (Liam Neeson) has renounced his faith while on a mission in Japan. Concerned, he travels to the island nation with another clergyman (Adam Driver) to investigate, only to find that the country’s Christian population are being systematically exterminated. Witnessing the inglorious reality of torture and martyrdom committed against Japanese Christians rocks his faith to the core. Scorsese directs Silence from a screenplay he wrote with Jay Cocks. The film, based on Shusaku Endo’s 1966 award-winning novel, examines the spiritual and religious question of God’s silence in the face of human suffering.

Thank “God” the Seminary and Church never got him. Otherwise, there would have been a Reverend Martin Scorsese at some church wondering why he has these visceral images of a man in a mohawk, men cutting cocaine, boxing and why he only dreams in 70mm. Thank CineMa that he got on to this side. Just imagine Films without Marty Baba…Impossible…

Walked out of “Silence” blown away completely. Yes, the fan boy that I am I will not say anything else but Silence is truly a brilliant film. It works at so many levels. It yet again raises the question of faith, the idea of managing and holding on to faith like in Mean Streets, Last Temptation and Marty Baba handles it brilliantly. It’s shot beautifully by Rodrigo Prieto who also shot Wolf of Wall Street and Thelma Amma has yet again edited it. There is no frenetic pace in the editing and it’s a very unlike Scorsese film. It stays on and lingers on the people well. Andrew Garfield is very good as Rodrigues and Liam Nesson is good in his small role as well. Now the damn VO. Coming to one of Marty Baba’s greatest tools and I loved the way the VO was used. It was almost journal like taking us back to the 1600s…A sort of a secret life of a Padre and it added on so well to the story. The coolest thing about Silence of course is all the Khujli mitafying Marty Baba has done. He has gotten Akira Kurosawa out of his system hopefully

🙂 What a wonderful tribute to a man he loved. This is one of the better Japanese period pieces to come out and that too from North America.

I will definitely watch Silence again. It’s too good a movie to be seen once. It lingers on for a long time to come. This November 17th (Yes, I know and celebrate his birthday) Marty Baba turns 75. 75. Let it sink in. At 75 to be relevant is one thing but to be at the top of your game, to do what you want to do and to do it so good is nothing but genius. GENIUS.

Go on Y’all . Don’t miss Silence. See it for everything but see it only for Martin Scorsese, one of the greatest directors of all time

“Different people will come up with different answers after watching the movie. What really matters is that the characters in Silence are actually as clueless about the answers to these crucial questions as the audience.”


Anshu Lal, First Post
“In his writings on semiotics, cinema and philosophy, Roland Barthes studies the relationship between signs and myths and the corresponding links these have with reality. Barthes’s approach to an object and its code are more relevant than ever to Martin Scorsese’s Silence.”


Devdutt Trivedi, Scroll
“How much suffering must a man take before breaking? Is God’s love so omnipotent that it can forgive even his handyman who sought recourse in renouncing his very own faith? Or is it that God is indifferent to the suffering? It sounds blasphemous but the truth lies in the endurance of suffering and it’s aftermath. Faith may not always be able to conquer all and that’s an unshakeable fact.”


Johnson Thomas, Mid-day
“For as long as he has been making movies – and it has been quite the journey, almost as epic as the one portrayed in this movie – he has been asking the same questions. Faith. Why must we have it? Must we have it at all? And do we – can we – comprehend it? There are no simple answers to this, and perhaps that is why Scorsese is still making movies.”


Rohan Naahar, Hindustan Times
“Lends itself to multiple meanings, ones even extending beyond the realm of religion, asking questions about self-deception, obsession, life choices and moral failure.”


Tanul Thakur, The Wire
“Except for the odd moment or two, it left me curiously unmoved, coming off more as an inert, far too-long (2 hours 40), repetitive costume drama.”


Shubhra Gupta, Indian Express
“The title… refers to the deafening silence that Rodrigues constantly receives. The god he prays to remains silent while waves batter men tied to crosses for nearly four days.”


Suprateek Chatterjee, The Quint
“Makes you question humanity as well as your very existence.”