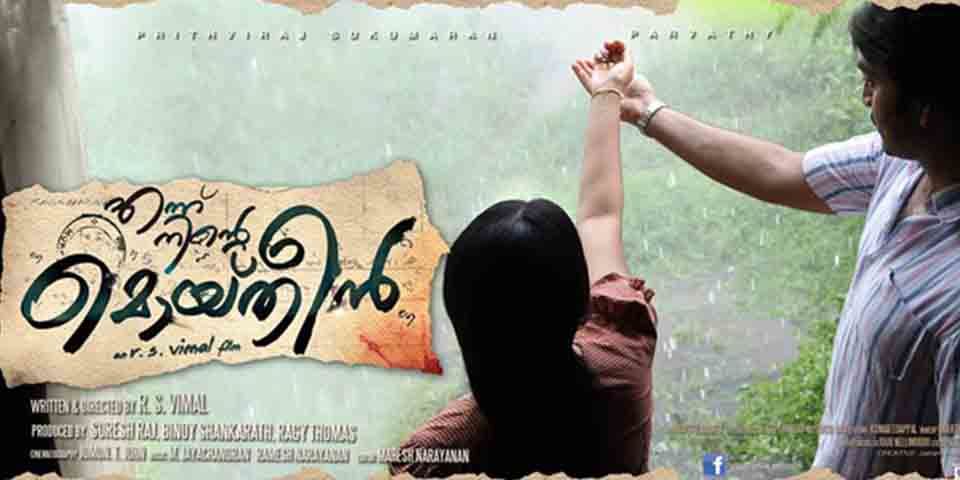 Perfectionism can be quite a nice trait to possess; except that it runs the danger of being a little expensive. Especially in filmmaking, an art form in which time is money and paying attention to a wide range of details is a requisite. Ennu Ninte Moideen (Yours, Moideen), reportedly, ran up an astronomical bill due in a large part to an excessive number of retakes. Is it justified?

Let’s first take a look at the script. It’s based on a true story. Boy looks at girl. Girl looks at boy. They soon fall hopelessly in love. The obstacle: one’s a Muslim, and the other’s a Hindu.

The real-life pair obviously knew each other inside out. It’s improbable that Moideen (Prithviraj Sukumaran ) and Kanchanamala (Parvathy) were just lovey-dovey puppies (who simply stared into each other’s eyes foolishly) as the film makes them out to be. While that sort of thing is fine for the first phase, love that lasts for eternity necessarily requires a certain amount of depth. Further, for the most part, there isn’t much that is inspiring or great about the reel version of Moideen; he’s frivolous.

All the cash and effort has been poured into the acting and the visuals. And it shows.

It would be an understatement to say that Parvathy puts up a rave performance. She lives every moment of her character. Prithviraj too surprisingly comes across as a little different from his usual self, and not just in appearance; though that and the chosen angles add tremendously. The duo merges into each other. Overall, there’s a freshness that springs from within all the other actors too.

The film is set in the sixties, so Prithviraj wears straight long hair that parts at the right side and covers his ears, and shirts with flowery, printed designs. Parvathy walks about in a salwar kameez at the start; whether such a fashion existed then is questionable. Since their characters hail from affluent families, they both flaunt a variety of fountain pens. The Kozhikode of half a century ago seems like a dreamland.

Jomon T. John’s canvas is a beauty. The warm tones, wide range of images, and Hollywood style of lighting give dimension to the characters and setting. And then, there’s the cinematic touch. The girl’s father turns furious when he receives embarrassing news. His fingers tremble terribly for a long time as he slowly pulls his ring out. There’s some blood on it. In the next room, a table lies fallen along with the girl. A piece of her cheek is torn open.

Water is used as a motif throughout; albeit, inconsistently. The reference is, perhaps, to tears. The lovers run and dance around the trees in the pouring rain. It rains in the soundtrack when the lovers meet alone. And there’s a river that flows.

Perfectionism is nice when it is accompanied by discipline and when the final, exhibited work of the artist has substance and lacks in nothing. At times when the costs of production skyrocket way beyond control, studio bosses have nightmares of turning into paupers overnight. Some films fail miserably, but eventually pass the test of time and go on to become cult classics. RS Vimal’s romance does not belong to this category.