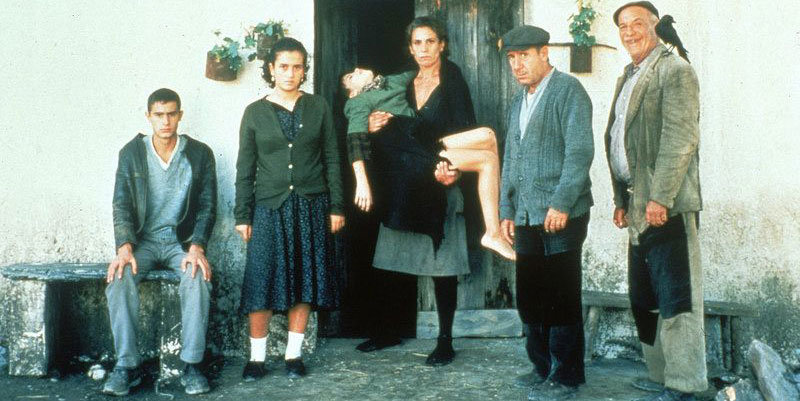 Mario Camus’ The Holy Innocents (1984) is a Spanish film that may be roughly described as ‘humanist realism’ because it deals with rural poverty in Spain during the Franco era. If precursors have to be named it will the neo-realist films from Italy in the post-war years although it exhibits fewer weaknesses than many of them.

A large number of the neo-realist films use children as focal characters (Bicycle Thieves, Paisan, Rome Open City, Shoeshine) because children (by convention if not by nature) are innocent, defenseless and natural victims; they cannot be made responsible for the community at large. The films do not stop with children but tend to reduce even adults to childlike states by conceiving of them as innocent (Umberto D, Miracle in Milan), in a way turning them into helpless creatures.

Critics of neo-realism have observed that when adults slip back into innocence they displace responsibility for the community elsewhere; they complain when the community fails to satisfy their needs and this complaining effectively replaces the possibility of action. This convention of using children to highlight misery was subverted by Luis Bunuel in Los Olividados (1950). As a critic describes it, the film is not a sympathetic document of poverty and delinquency among Mexico’s poor. Bunuel’s children are no more innocent than his adults, perhaps less so. Where his adults have merely been dulled into insensitivity by the brutality of the world, the children take an active part in promoting the brutality.

The Holy Innocents is not caustic like Bunuel’s film and deals with the poor as victims. Still, the film is less sentimental than Bicycle Thieves, Umberto D or Miracle in Milan. The story is set somewhere in Spain in the 60s. Paco and his wife Régula work as tenant farmers for a very wealthy landowner and they have three children, one of whom is physically and mentally inert. When Régula’s mentally deficient brother Azarias is fired from where he has worked for several decades, he settles down at their little place although his presence is hardly welcome.

Bits of the story of The Holy Innocents are related in flashback with a single person as protagonist in each telling – but also surveying the other characters alongside. Azarias, it turns out, is confined to a mental asylum and the rest of the film gradually lets us know how this happened.

Azarias is a cheerful sort with a great fascination for birds. When the film begins he has a pet owl and when it dies he gets himself a baby blackbird. The landowner’s son Ivan is very fond of hunting birds and Azarias’ pet birds usually function as decoys to lure flocks away. Paco is Ivan’s ‘underling’ and the relationship between the two is interesting. Ivan is deeply reliant on Paco and describes him as a faithful dog, while Paco appears to relish this description.

Paco, in fact, takes pride in his master’s prowess as a hunter and brags about it. Eventually Paco breaks his leg when he falls off a tree but his master persuades him to come along – until he is permanently crippled. Since Pace cannot go out now it is Azarias who helps Ivan. Azarias is not of much help and Ivan is unable to bag a single bird. Finally, in a fit of pique, Ivan shoots the single bird that approaches – Azarias’ pet blackbird. Azarias is heartbroken, but when he accompanies Ivan the next day he slips a rope over Ivan’s neck and ‘executes’ him.

Some of the film – especially the insensitivity of the landowning class – is perhaps overemphasized but the film has virtues of a kind not usually seen in films of this kind. There is some complexity in the way the ‘Manager’ is introduced – we take him to be the landowner initially because he seems to be on terms of equality with him. But when the master takes up casually with his wife, he needs to even facilitate the relationship between the two.

One problem with films about poverty – Indian films are especially culpable – is the tendency of filmmakers to make the poor retain their dignity. But if poverty still leaves those who experience it with their dignity intact one wonders if poverty can be so unbearable. In The Holy Innocents Azarias is a perpetual source of danger to the family because he defecates everywhere and Régula has to keep a look out for lumps of excrement that he may have left around on the master’s grounds. Moreover, Azarias likes to wash his hands in his own urine – to keep them from getting chapped – and then uses the same unwashed hands to pluck chicken for the master’s table.

Another shocking element used to great effect is the inert child – which we only glimpse – breaking into inhuman screams. Azarias, who is oblivious of the horror, regards the child as though it were a pet bird. In one sequence he treats the landowner’s daughter to a full view and the girl emerges pale and shaken. The natural response to the lives portrayed in the film is a ready sympathy and by introducing these elements into the narrative, the film gets a deeper response than is normally possible.

If The Holy Innocents has another great achievement to its credit, it is the quality of the performances. The Italian neo-realists advanced the idea that it would make the lives of those portrayed more credible if the roles were played by non-actors. The roles in The Holy Innocents are all played by professional actors but the characters are more luminous and credible than those in the Italian films. Especially brilliant is Francisco Rabal as Azarias. Azarias is mentally deficient but there is still logic to his behavior – not to be found in performances like those of Ralph Fiennes (Spider), Dustin Hoffman (Rain Man) or John Malkovich (Of Mice and Men), which rely more on empty gesturing than on an underlying behavioral logic.