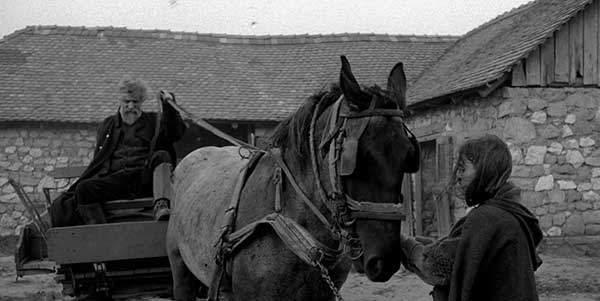 Among the various elements of camera style, the long uncut sequence has a way of getting attention for itself. Originally, the device was a constituent of mise en scène or the articulation of cinematic space (as opposed to montage, which is the articulation of time). Where mise en scène has regard for the subject in front of the camera and is associated with the realist aesthetic, montage enables expression by making new associations. The uncut sequence in films by Max Ophuls (e.g. The Earrings of Madame de…, 1954) is a way of maintaining the integrity of the space while narrating and this is also true of Miklós Jancsó (The Red and the White, 1967). In Ophuls’ dance hall scenes, for instance, the camera catches different elements of the action without a single cut, thereby establishing the unity of space instead of dismembering it – as Sergei Eisenstein (who championed montage) did in The Battleship Potemkin (1925). The function of the uncut sequence as an element of syntax changed in cinema later. In the closing segment of Andrei Tarkovsky’s The Sacrifice (1986), for instance, the camera holds on to an image when it fulfills no narrative purpose. Why Tarkovsky resorts to the stratagem is difficult to explain but it has become familiar to us from art house cinema today, some directors known for it being Theo Angelopoulos, Alexander Sokurov (Russian Ark, 2002) and Tsai Ming-Liang (Goodbye Dragon Inn, 2003). Russian Ark consists of only one long uncut sequence and my sense is that it fulfils no aesthetic purpose but is intended only to be a first of some kind – the kind that people who get into the Guinness Book of World Records attempt. Béla Tarr, who had made conventional films before, attracted attention for the first time with Damnation (1987) in which each uncut sequence sometimes runs to eight or ten minutes.

Béla Tarr earned his reputation largely through two films in which he pursued the uncut sequence to extreme lengths. The film regarded by many as Tarr’s masterpiece is Satan’s Tango (1994) a seven-hour film even more mysterious than Damnation but underneath, it is still possible to assert that the film is basically describing a state of political collapse which can be identified with the fall of Communism. The film is set on a collective farm which has gone to seed, the barns empty and the workers idle and drunk. Two men formerly from the collective are returning and, although nothing is ever made crystal-clear, it is evident that the two are tricksters trying to persuade the other members of the collective to ‘invest’ their savings. There are some stunning extended sequences in Satan’s Tango of which the most mysterious shows the two newcomers walking along a street, their backs to a tracking camera which is keeping pace; the wind blows garbage – mainly waste paper – incessantly in the same direction. The sequence is uncut and takes around ten minutes. My own reading of it relies on the awareness that the conclusion of any undertaking generates waste paper because files and records are destroyed. If a political system collapsed, therefore, one might expect an enormous generation of waste paper. While Tarr’s film may have political implications, he himself does not try for political understanding but deals with an emotional state bordering on despair. This, however, is understandable since Communism had held sway for nearly half a century and, to people who grew up under it, it might have exhibited all the symptoms of an irremediable natural order.

Neither Damnation nor Satan’s Tango can be read as allegory because they carry the enormous burden of the immediate, but one feels that Tarr’s style lends itself naturally to allegory. Werckmeister Harmonies (2000) is a strange film in black and white and set in a small unnamed town. A circus comes to the town in the dead of night and its chief exhibit is the giant carcass of a whale. Also advertised alongside the whale and various other marine wonders is a performance from a mysterious person called ‘The Prince’. The arrival of the circus is followed by civic disturbances brought about by the incendiary speeches of the Prince, who is never shown. To my mind Werckmeister Harmonies (2000) is about the strife eventually initiated any kind of faith, be it a religion or an ideology. The Prince is perhaps the warrior-prophet which most religions cannot do without. Even Communism had its warrior-prophet in Lenin. This interpretation makes the film seem even banal but making Werckmeister Harmonies more profound is the emblem of the whale. The whale is perhaps the original wonderful object associated with the dogma, the original sacred object associated with the faith – the stone slab on which the Commandments were inscribed, the Holy Grail for Christianity or a cultural object like Marx’s Das Kapital for Communists. This object is an emblem of the wonder of creation and/ or the world and of God’s laws. But after the strife initiated by the warrior-prophets has finally concluded and equilibrium is reestablished, the sacred object has perhaps lost its wonder. The whale is only a profane object now and not an emblem any longer.

After the doubtful The Man from London (2007) Tarr has come back with a big critical success The Turin Horse, which several important critics cite as among the best films in 2011. IMDB viewers give this film a rating of 8.1 which is only just under the rating given to Tarkovsky’s Andrei Rublev (1966). Such enthusiasm forces us to look at The Turin Horse and assess it. Béla Tarr is a difficult filmmaker not because he is intellectually demanding but because he works by instinct, perhaps without being entirely conscious of what he is meaning. An artist is not obliged to explain himself – in fact, it is even better that she/ he does not – but this is not an exemption available to critics, who would do well to ‘construct staircases’ to the esoteric regions reached by art. Film criticism today, unfortunately, does no such thing and critics respond to the most difficult films through simple eulogy – without even guessing at intent.

The Turin Horse begins with a brief account of the whipping of a horse witnessed by the philosopher Friederich Nietzsche in Turin in the last years of his life after which he had a mental breakdown. One does not know what to make of this information but it is apparently intended as an insight into suffering. Tarr’s ‘story’ begins thereafter and it is about a farmer and his daughter and their horse – which may or may not be the one seen by Nietzsche. The film’s story spans six days and a terrible wind blows dust and leaves through five of them. The farmer and his daughter do nothing except shelter from the gale, fetch water from a well, live on boiled potatoes and unsuccessfully try to feed their horse. The farmer gets his clothes on and off, some times with help from his daughter and some times without. A man Bernhard visits them, launches into a monologue about humanity’s degradation. Some gypsies arrive and try to steal water from the well. The well goes dry and the farmer, his daughter and their horse move to another dwelling. This story – of which I have left out little – is told over 147 minutes and in only 30 uncut segments. The camera work is finely detailed and in black and white but nothing ever happens – with even the lighting and putting off of a lamp becoming major happenings – and the music by Mihály Vig (string and organ) repeats the same bars over and over again. Where Vig’s music for Werckmeister Harmonies was deeply affecting, it does nothing here.

The Turin Horse has a series of stunning images (cinematography by Fred Keleman) but it is curiously unaffecting. In opposition to Siegfried Kracauer’s contention that meaning resides in the image, Frederic Jameson suggested that the cinematic image itself does not ‘mean’ but needed to be buttressed by narrative, and there is little or no narrative of any sort in The Turin Horse. I also detect a difference between the long takes in Tarr’s best work and The Turin Horse and it is as though, having become recognizable through his cinematic style, he was imitating himself without much conviction. Satan’s Tango and Werckmeister Harmonies have close-ups and sharp cuts and there is a lot more going on. If there is nothing going on in The Turin Horse, Tarr also eschews every cinematic device except the long take and it is as if a patented cinematic style were replacing everything else.

Tarr, who has (rightly) decided that The Turin Horse will be his last film, has tried to explain it thus: “We just wanted to see how difficult and terrible it is when every day you have to go to the well and bring the water, in summer, in winter… All the time. The daily repetition of the same routine makes it possible to show that something is wrong with their world. It’s very simple and pure.” In actual life, the worst kind of drudgery only appears to be repetitive because those who live the most miserable lives deal with crises every day and a crisis, by definition, is unexpected and not part of a repeating process. If one were confined to a house for days on end in a gale, for instance, the roof might suddenly need fixing. This additional work could be difficult and debilitating but it would hardly translate into monotony and boredom, which is how the lives of the characters appear in the film. Also, the poor might have to live only on potatoes but wouldn’t they try to make their food appetizing in the least expensive way possible? Tarr’s characters eat potatoes whole without even adding salt. They don’t even cut them into smaller pieces so that they might cook better. If they always cook these enormous potatoes whole, the purpose simply seems to be because whole potatoes look better on the screen. This, again, makes us doubt Tarr because, rather than pay attention to the kind of lives he is paying lip service to, he seems to be intent on conjuring up images to impress audiences at film festivals.

Béla Tarr’s best cinema, as I have argued, came out of a very specific historical moment although they do not consciously refer to it. This moment, it is evident, has passed and this may explain why he has been unable to make any headway in his films after Werckmeister Harmonies. It is unfair to expect great filmmakers to be productive all their lives and most of them go through trajectories in which the most luminous work appears only in fleeting windows. While such an allowance should be made for all great filmmakers, no allowance should be made for critics who eulogize films made by those considered great – because they recognize a ‘signature style’. A signature style is not the essence of great cinema.