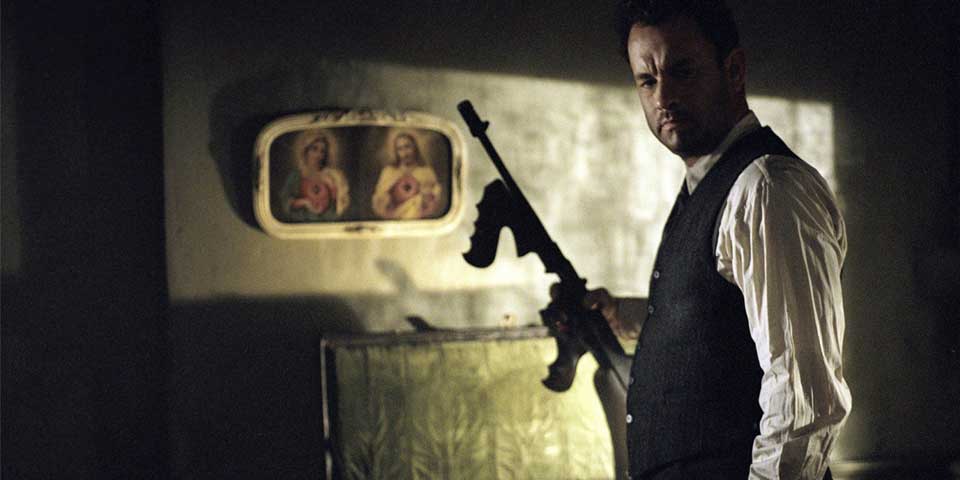 Road to Perdition: A Curious Study

As far as Sam Mendes’ films are concerned, 1917 has a full-blown overwhelming perspective to it, American Beauty is one of the most well written films in the history of cinema, and Road to Perdition is arguably his best conceived work.

Road to Perdition created some intense imageries thanks to Conrad L. Halls camerawork and Thomas Newman’s background score. The instance where Michael Sullivan Sr. kills John Rooney and his guards could be an example of a defining moment where a fairly predictable sequence becomes all the more interesting due to the individual images and the anticipation generated from the background score. We hear the deafening gun shots only when the frames become personal. Michael Sullivan Sr. is presumably viewed from the perception of the son. Till the father and the son are on the run, and thus become close, we are watching the father only from a distance or beyond the frame. The first frame having a definitive close shot of the father is when he sits weeping over the death of his wife and child, while Mike Jr. approaches the broken superstructure of his father, who was a frightful, incomprehensible man till then.

The character, which gives us the freedom to question his background and actions, is Michael Sullivan Sr. We are unsure whether he’s a good man or not. But we are convinced that he is a good father, thanks to how the character was perceived and penned by the writers. He interacted with the diurnal darkness of being for his own reflective identity and for the comprehensive comfort of his family. There are many such characters in the vast menagerie of films or literary works created all over the world. There are cognitive similarities with James Gandolfini’s inimitable Tony Soprano, more in the areas where he was a doting father. Michael Sullivan Sr. is not a mafia head, but his outlook as an apprentice of the Connery family made his character dark, dangerous and dominating. But, Road to Perdition leaves us with an urge to know more about Michael Sullivan Jr. We did not get much idea about how the kid spent the rest of his life with the old country couple. What we do know is that he didn’t hold a gun anymore after he saw his father die in front of his eyes. He fulfilled his father’s desire to not be like him.

But, that two-sentence roundup of the character is not satisfactory. Yes, the immediate dangers to the Sullivan family pass. Everybody who followed them to kill them are dead. But, what values do the child learn from his father? He could not state whether his dad was a good or a bad man. Did his perception change?

Herein lies the excellence of Max Allan Collins and Richard Piers Raynar, the author and illustrator, respectively, of the graphic novel from which the Road to Perdition has been adapted; the duo is also credited along with David Self as the screenplay writers. We look at a character and there comes a time when we have the urge to know more about him, even if that leads to a genre-bending representation. The kid’s life won’t be like that of his father. His story won’t have bloodshed, gang wars or tensions.

Moreover, we aren’t told more about Sarah, the wife’s sister, who lived in Perdition (a fictional place per se). Why was there a house on the perceived road to damnation? Was the whole plot symbolic, and thus the character of Aunt Sarah a reflection of doom? Yes, there is a sequence where the father talks with Aunt Sarah and tells her that he is going to her place for shelter. But, when they reach Perdition, we don’t find any Aunt Sarah. Yes, there was a dog, but that has a divine symbolism. If not for the dog, the boy might have been dead too. The basic idea of Perdition appears to be that the place is not grounded. The Sullivans face damnation there. It was already written in their fate, as they knew they were going to perdition vis a vis. ‘a state of eternal punishment and damnation into which a sinful and unrepentant person passes, after death’. At least the father knew.

Road to Perdition on IMDB

Abhirup Sen is the founder of the Kolkata Movie Database. A history teacher by profession, he is into amateur photography and writes extensively on cinema.