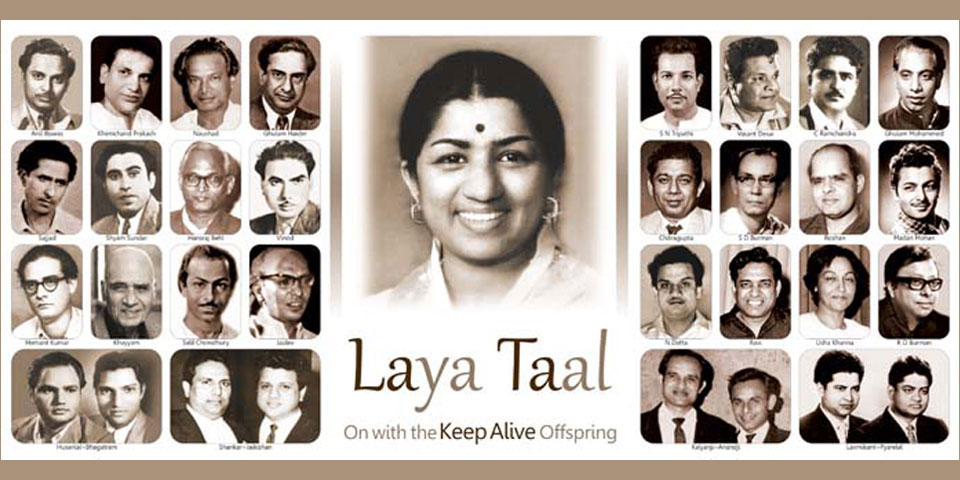 Heartbroken, but blessed to have known her & for having worked with her.. Loved this incredible voice & soul… Lataji holds a place in our hearts that is irreplaceable…. That’s how profoundly she has impacted our lives with her voice. May she rest in peace & light up the heavens with her soulful voice..
Ilaiyaraaja, Music composer
Today India has lost its voice. A voice that defined Indian Music for generation. Lathaji has enriched our lives for decades with her soulful voice. Her legacy is unparalleled. Even though Lataji is not with us physically, We will always carry her voice in our hearts. Pranamam to Maa Saraswathi. Sadgathi

KS Chithra, Singer
She leaves a void in India difficult to fill. Good Bye Didi.
Amit Khanna, Film lyricist-producer
Today is a very sad day for all Indians throughout the country. Our beloved LATA DIDI has finally left us for her real home at the feet of Ma Saraswati. She has immortalized herself by rendering umpteen number of melodious songs for all the occasions. In fact, she has changed her residence from Prabhu Kunj to the hearts of 130 Cr. people of the country. I am very sure that whosoever came in touch with her has some immortal memory to cherish. I too am blessed that I have some unforgettable memory that I wish to share with my friends.

I was shooting a film Mere Saath Chal as the DOP for a very dear friend Suresh Sharma. The artists were Smita Patil and Farooque Shaikh in the lead. Pt. Hridaynath Mangeshkarji was the Music Composer and Lata Didi was the singer We shot the song in Kashmir and when we came back Didi requested Suresh Sharma that she wanted to see the picturization of the song..We organized the screening of the song in the auditorium of our lab, Film Center, Almost the entire Mangeshkar family excepting Asha Tai was present in the theatre. I was sitting between Hridaynathji and Suresh Sharma. Lata Didi was sitting in front of me. As soon as the light was switched on after the song got over, Didi turned back and said to Suresh Sharma, (the Producer/ Director) Sureshji, Adeep has done such a wonderful job that I am not happy with my singing, I want to redub my song. Adeep is a Genius. Suresh was dumbfounded as both of us felt that Didi had sung the song very well. He started pinching me and telling me that it will cost a lot to hire the studio. I told him if she feels to do it again we must let her do it, after all, it’s in the interest of the film only. Didi came and sang the song again, never charged a penny and the next song also she didn’t charge any money. She was the first Legend to call me a Genius, the other being Mr. Vijay Anand (Goldie Saheb). This was the first Golden memory of mine with Didi, etched in my mind forever. Didi you shall always be missed by all of us. God bless you wherever you have gone.

Adeep Tandon, Cinematographer
An integral part of our lives. Om Shanti.
Rajesh Subramanian
They both had met in ‘Madhumati’: Ritwik Ghatak and Lata Mangeshkar bade adieu on this day, 6th February! Who will now beckon the ‘pardeshi’ (stranger) to the other shore?

Ghatak’s characters also sang the songs yearning to go to the other shore, but what a coincidence that the Nightingale of India, Lata Mangeshkar and Ritwik Ghatak who wrote the screenplay for Bimal Roy’s film ‘Madhumati’ (1958) chose the same day (6th February) to depart from our world. In 1958 Lata di was only 29 while Ritwik da, four years older than her, 33.
The Nightingale has left behind her a unique voice in almost all Indian tongues, her songs for every mood that we hear every moment in some corner of this country and elsewhere in the diasporas… The world will miss her physical presence on this Earth… From the foggy mysteries of the mountains, the song still beckons the ‘stranger’ – आ जा रे परदेसी… while Ritwik da asks, ‘Who is not a refugee?’

Amrit Gangar, Film historian
….Diya Jale… Rest In Eternal Peace….This vacuum will never be filled…
Resul Pookutty, Sound designer
“Ms. Mangeshkar was known for her range — she could sing in four octaves — and her gift for singing in character, tailoring her voice and emotions to the actress she was voicing onscreen. “


Shalini Venugopal Bhagat
“Mangeshkar’s popularity extended far beyond India. She was celebrated not only in neighboring Pakistan and Bangladesh but also in some Western countries.”


<By associated Press>
“Leaves behind an unmatched legacy of music.”


Anshul Verma
“Responsible for singers earning royalties rather than just a one-time payment thanks to a lone battle she waged in the 1960s.”


Shalini Dore
“There was something distinct in the way Lata approached the finer nuances… As for her voice quality, she tweaked her style as per the actor she represented… Two of her biggest hits were composed in the same raag, Shuddha Kalyan, with a similar opening. Yet, the singer made it sound like Chand phir nikla was made only for Nutan, and Rasik balma” only for Nargis.”


Narendra Kusnur
“With an impressive vocal range, covering four octaves, she became massively popular with film directors for her ability to understand the context in which her songs would be used. Mangeshkar did not just sing, but made sure that her performance matched the storyline and the character, saying that she always read the lyrics and listened to the tune before agreeing to sing.”


Robin Denselow
“One of India’s best known cultural icons and a singer who defined music for generations.”


Abhirup Roy & Shilpa Jamkhandikar
“Lataji, as embodied and incarnated by the seven musical notes, has bound and held together music lovers in the last seven decades with the fine thread of her mellifluous vocal chords.”