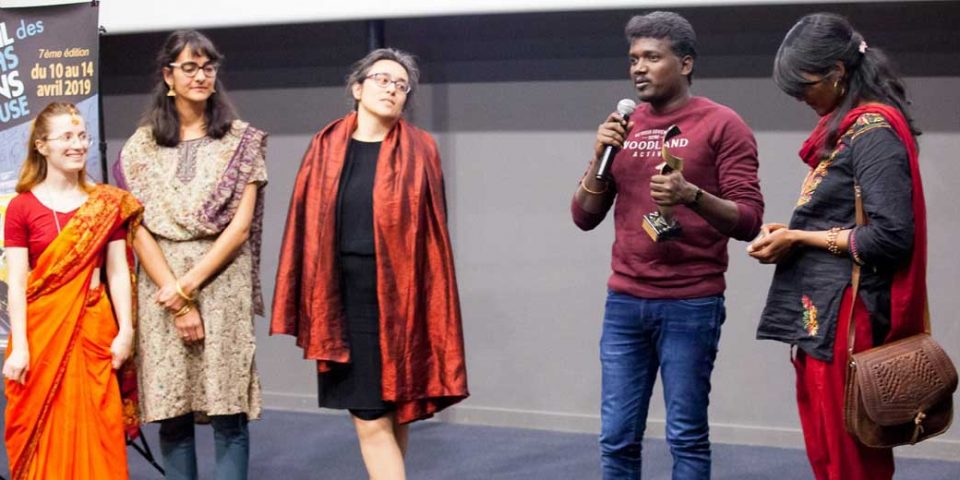 “The discrimination that Dalit students face in educational institutions has come under much discussion in mainstream media after the suicide of Hyderabad University scholar Rohith Vemula. However, a majority of people from privileged castes continue to believe that caste exists because of the reservation system and not the other way around… Pariyan smashes the windshield of a car and yells out his angst, his decision to lead his life the way he wants to. Though he’s talking to a character inside the car, it feels as if he has ripped open the screen and is shouting to the audience. The glass lies shattered and we’re forced to look at him, hear his voice.”

“We see how we can (choose to) be humiliated by our own people, when they don’t live up to society’s standards. This is a remarkably level-headed film that tackles both the without and the within. (Even as we are oppressed, we can end up oppressing ourselves.)… A far more internal film. It feels personal in a manner that resembles reading someone’s diary… There’s a unique sense of time and place, an attention to a way of life that feels almost anthropological… Ends with a shot that’s like a still-life painting we can ponder about for hours. It’s not an ending, really. It feels more like a beginning.”

“Mari gets his details right. He shows us a way of life that seems to run on Ilayaraja’s music. With “Naan Yaar”, the need to claim an identity takes a creative twist; it is easily one of the most creative visualisations in recent times. Ideologies and art become shields and weapons. I was reminded of Ranjith time and again, only because he was the first voice that opened up this school of thought to us on screen. Mari Selvaraj goes a step further. Pariyerum transformed what the colour blue meant to me. I don’t think I can look at without its social significance anymore.”

“Offers a realistic comparative study on the behaviorism of traditionally unequal systems while also identifying the true attributes of honor and proposing a decent way forward towards suitable conditions.”
Dalton, FCCI Jury at Toulouse
“Condemns caste inequality, realistically, in a mass entertainer that retains its architecture sans the traditional posturing associated with heroes.”
Ratnottama Sengupta, FCCI Jury at Toulouse
“Focuses in an Indian milieu a social problem, with sympathy, and devoid of flourishes and frills.”
Gautam Kaul, FCCI Jury at Toulouse
“The most important film representing south Tamil Nadu in the last 30 years of Tamil cinema… Goes a long way in addressing the issues that have been systematically silenced in mainstream Tamil cinema.”

“A flower in a field of weeds… an important film in the history of Tamil cinema.”

“A truly personal letter. The kind where certain words are smudged due to the tears trickling down the writer’s cheek and onto the paper as he pours his soul out. This is both an introspective and an interrogative film. A character study and a study of society… Education is the key to liberation!”

“In a society where gender minority people face sexual violence from all quarters, the last thing we need is for the victims to normalize rape and violence. What is the takeaway for mainstream audience if a progressive film normalizes sexual violence?… In spite of its flaws, the movie will appeal to mainstream heteronormative audiences, and perhaps contribute to creating an inclusive society.”

“Incorporates very Biblical imagery to narrate his story… Pariyan is made to carry the cross of caste for the collective sin of the society… The parallels between the lives of Pariyan and Jesus Christ are too glaring to go unnoticed… In fact, one of its songs opens with lines from the Vulgate, a late-4th-century Latin translation of the Bible.”

“The education system designed to leverage the strengths of an urban middle class becomes a tool for alienation… hegemonic weapons of the current education system to alienate the depressed class from the system.”

“Caste equality might not exist out there in the streets in the film, but it seems to be in wine shops. When Pariyerum wants a glass of liquor, a man — with three lines on his forehead and wearing the sacred thread [in the wrong way… was that a deliberate touch?] — offers him a glass. Another drinking scene takes place inside the building site of a temple. Pariyerum Perumal is filled with such powerful statements.”

“Deftly weaves in the flaws in the way education is structured and disseminated in the country… The post interval leg of the film is announced with a crescendo of violins that plays a singular note – something that can be visually represented by a series of straight musical lines drawn at once – signifying the intense emotions that course through Pariyan as he comprehends what’s happening to him, anger replacing disbelief.”

“It is notable that there are hardly any Dalit women in this movie, even for representational purposes… Such a portrayal only reaffirms the dominant criticism that the Dalit movement is predominantly male-centric.”