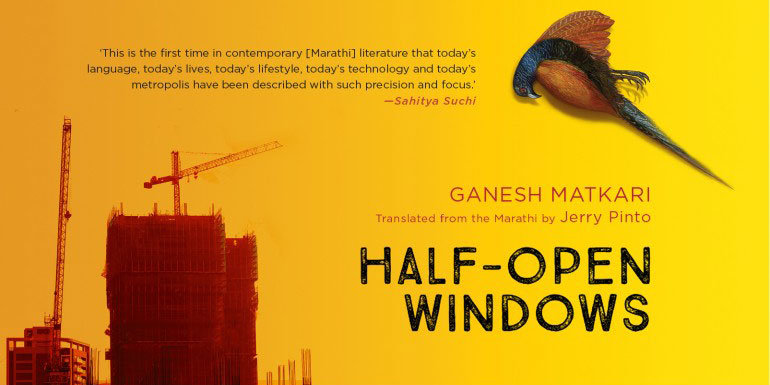 ‘On one side, the sea. On the other, the city. A city that seemed to believe that the Queen’s Necklace was enough past for it, a city sacri cing its beauty at the dirty altars of money.’

Half-Open Windows (Khidkya Ardhya Ughadya) is a portrait of India’s urban upper middle class on an obsessive quest for riches and prestige. Set in the enticing yet treacherous city of Mumbai, it closely follows the lives of people connected to SNA Architects, an up-and-coming firm, basking in the glory of their recent success—a high-rise in the premium area of Colaba.

As events unfold, the reader encounters the corrupt and ruthless Niranjan, founder of SNA, and his associate, Nita, who think bribery is a small price to pay to get to the top; another founder of SNA, the honest but naïve Sanika, and Shushrut, an aspiring writer who is no longer content to play her stay- at-home partner; an NGO worker, Swarupa, torn between her loyalty to an old friend and her duty as a whistle-blower; a lonely widow, Joshi Kaku, who wonders if moving to the US to live with her son and his family—with whom she can forge no connections—is a wise idea; and Ramakant, a young student of architecture, who is contemplating suicide in a desperate bid for attention.

Even as this diverse cast of characters chases happiness and success, Mumbai emerges as the central character—the driving force behind their aspirations and dreams, and their ethical compromises.

Ganesh Matkari is an architect, film critic and film-maker. He is the author of the critically acclaimed novel, Khidkya Ardhya Ughdya (Half-Open Windows); a short-story collection, Installations; and three books of film criticism, Filmmakers, Cinematic and Choukatibahercha Cinema. He co-directed the national award winning Marathi Film, Investment, and directed a short film, SHOT, which premiered at the Indian Film Festival in Stuttgart, Germany, and has been shown at various film festivals since.

Jerry Pinto is the author of, among other books, Murder in Mahim, Em and the Big Hoom (winner of the Hindu Literary Prize and the Crossword Book Award for Fiction) and Helen: The Life and Times of an H-Bomb (winner of the National Award for the Best Book on Cinema). He has also translated into English, from the Marathi, Daya Pawar’s acclaimed autobiography Baluta; the memoirs I Want to Destroy Myself (Mala Udhvasta Vhachay) by Malika Amar Shaikh and I, the Salt Doll (Mee Mithaachi Baahuli) by Vandana Mishra; and Sachin Kundalkar’s novel Cobalt Blue. Jerry Pinto was awarded the Sahitya Akademi Award and Yale University’s Windham-Campbell Prize in 2016.

The book is available on Amazon. Publisher: Speaking Tiger Books

Loev is now on Netflix