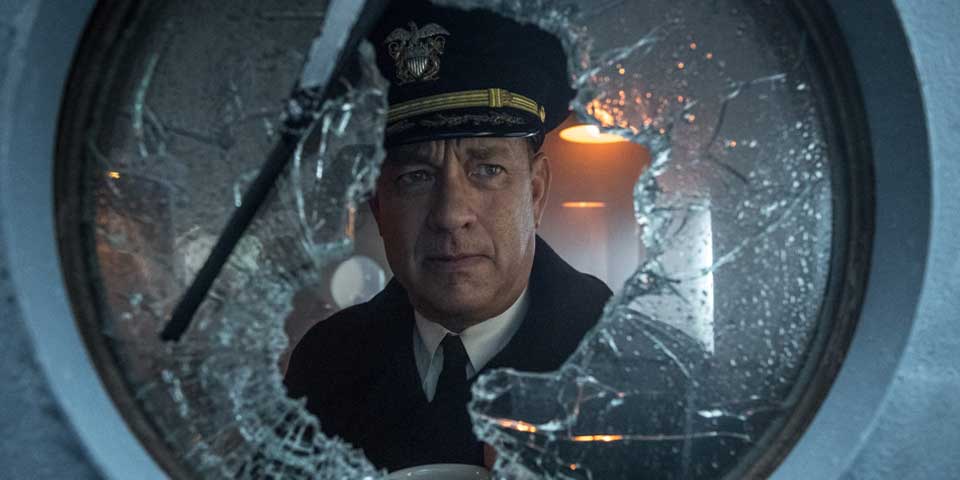 One of the anticipated movies of 2020, Greyhound is based on the 1955 novel, The Good Shepherd by C.S. Forester. Set at the beginning of World War II, the film follows the journey of Tom Hanks as the new-blood navy commander, Krause, who leads a group of escorts as they protect a convoy of merchant ships in the Black Pit (Atlantic Ocean) from enemy submarine attacks.

The importance of the convoys is stated again and again, as the Allied countries would send support and resources like weapons and necessities to war-torn fronts. An amalgam of a documentary and a historical war piece, Greyhound insists on educating its viewer on the tiny but important details hidden from the common man as well as providing him with entertainment and melodrama.

The film begins with the advance of the convoys, flanked by the Allied destroyers as they make their way deeper into the Black Pit. The drone of scouting choppers overhead is accompanied by the primal war drums of yore, and the smog induced haze over the frigid waters set the tone of the film.

Tightly paced, in this 90-minute film, Tom Hanks is ambitious with his third feature-film screenplay. Maybe third time could have been the charm, but we leave that to the viewers as the critical reception is a bit of a flip-flop as some accuse Hanks of being too attached while others cut him slack for his harrowed experience with Covid-19, the delay of Greyhound’s release and finally selling it to an OTT platform. 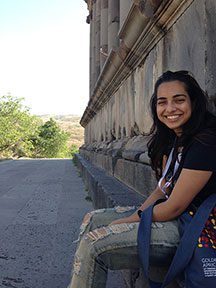 Strange but fitting, the film drops us in a flashback the moment it starts, giving the viewers a well-saturated, cheerful scene with Christmas music to juxtapose between how life was and how life became because of war. Also used as exposition, it reminds the viewers that unlike the expert characters of Sully and Captain Phillips, who were masters in their fields, this particular role of Hanks, while similar, is also something new.

The camera work is as well as expected from an action movie cinematographer, as Shelly Johnson has films like Captain America and Percy Jackson under his belt. Following the roiling motion of being on sea and visually hounded by rain stained windshields and vignette covered binoculars, the viewers are in for a well-lit adventure as they travel with Krause and his team. There seems to be a pattern as the composer of the film also seems to be someone who has worked with action-filled superhero films and shows. Greyhound has the perfect format of a war film with just the right production design, the daunting soundtracks, to the VFX of battle scenes and quick editing.

With the first half of the film being used for strategizing, be aware as most of the dialogues are infused with the technical jargon of military codes and attack plans. While those unfamiliar with military lingo try to grapple with the quick delivery of lines, we have Hanks’ Krause who is a religious man and spends half the time referencing Biblical quotes and symbolism which is further lost on those who are not acquainted with it. Even when you think you’ve gotten a hang of it, they bombard you with a whole another set of terms. As you trudge mentally, trying to familiarize yourself with it all, again, remember to keep in mind which transports are the enemies and which are the Allied supporters, which is no easy feat.

Another thing that is bound to confuse everyone is how in a very racially aware time, can Black and POC actors be relegated to the background, used as chefs and collateral to illicit emotional responses. Rob Morgan of Mudbound and Daredevil fame plays Cleveland, the snarky, stereotypical black token character which we thought we had done away with at least in this decade.

There seem to be some interesting faces whose names we never catch but attract us anyway with their expressions, their eyes communicating much more than their clipped dialogues could ever. Had the story been focusing more on human relations than the action on sea, it would have been pleasant to watch these characters develop further and see their relationships between each other, whether fraught or peaceful.

It’s already understood by Hanks’ vast repertoire of award-winning roles, but it never hurts to repeat as he once again gives us a brilliant performance as Captain Krause. Even when one has no idea what he’s saying with all his commands and communications, the urgency he brings, the suspense he adds makes it that much delightful to watch him perform. He brings a nuanced side to his character which even the flashback failed to provide with the introduction of his long-time fiancée. A polite and a disciplined man, Krause is a level-headed but inexperienced commander as he gets his first posting of managing an essential convoy. While it seems surprising as to why anyone at command would assign such a dangerous mission to a newbie, it soon becomes clear as Krause demonstrates his affinity for planning attacks and rationalizing, leading his team to a hard-earned victory.