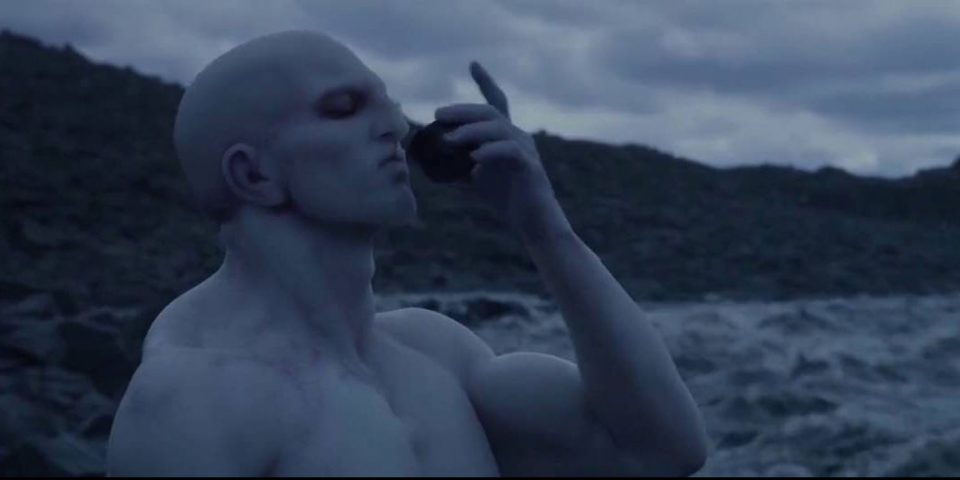 A ‘prequel’ to a film classic is sometimes a much better marketing ploy than a sequel – especially when the first film began on an intriguing note. Ridley Scott’s Alien (1979) is a horror classic and it engendered several sequels by other filmmakers until Ridley Scott embarked upon its prequel Prometheus (2012). To those who have not seen the original film – and there cannot be many of those – Alien begins when a spaceship carrying minerals is returning to Earth from a distant galaxy. When signs of life are detected on a passing planet, the crew is directed to explore and report back to headquarters. Members of the crew land on the planet; what they see is initially hazy but Alien puts together one of the most striking sets in film history. What we see in the darkness and fog is something that resembles the remains of an ancient spaceship perhaps half a mile across, twisted and eaten away by the elements. On the floor deep inside, the crew members find irregular protrusions – which reveal themselves to be primitive creatures attached to the floor like barnacles, opening up on inspection to reveal pink tissue, moist, veined and throbbing; this strange but not yet threatening creature goes on to bring about one of the scariest monsters in Hollywood film history.

A set like the one in Alien is simply designed to enthrall and excite – which it unfailingly does each time – and not provide reasons for how whatever we see came about. The prequel, on the other hand, needs to create a narrative basis for Alien’s opening set. It has not only to think up a plausible narrative but also connect with the film-going public’s concerns today. The unfortunate fact it must contend with is that this public is less intelligent than the one in the 1970s – perhaps the best period for Hollywood. Ridley Scott is obviously not to blame for Prometheus because, given the film’s cost, he can hardly take chances. If Alien was a horror film, Prometheus attempts to become ‘philosophical’ about mankind’s origins. “The search for our beginning could lead to our end,” declares the poster for the film and this suggests getting on with ‘philosophy’ without losing out on horror.

Prometheus begins with a humanoid alien on primordial earth. As he drinks a dark bubbling liquid, he starts to disintegrate. As the alien’s remains fall into a waterfall, his DNA triggers a biogenetic reaction. In 2089, archaeologist couple Elizabeth Shaw and Charlie Holloway discovers a star map among several unconnected ancient cultures. They interpret this as a sign from humanity’s forerunners, whom they name ‘the Engineers’. Peter Weyland, the CEO of Weyland Corporation, funds the creation of the scientific vessel Prometheus to follow the map to the distant moon LV-223. Arriving in 2093, they are informed of their mission to find the Engineers. Mission director Meredith Vickers orders them to avoid making contact without her permission, a directive which, in order to get the story going, they ignore. The Prometheus lands near a large artificial structure, which the team explores.

Relating the rest of Prometheus is pointless and what is important is that there are two kinds of creatures to be accounted for plausibly. On the one hand are the humanoids from the opening sequence who are presumably the Engineers who engendered mankind and on the other are the monsters which proliferated in Alien and its sequels. Since there is an ancient spaceship also to be accounted for, the Engineers cannot be indigenous to LV-223 but should be made to have arrived from elsewhere.

Our curiosity revolves around the relationship between the two kinds of beings because they are so different – gods and monsters – and it is necessary to have one explanation for both. It would, for instance, be ludicrous to propose that the two arrived separately on spaceships from different planets and encountered each other accidentally on LV-223. It would also be unacceptable for the Engineers to have arrived in a spaceship and being undone by local monsters because that would be like replicating Alien.

The artificial structure, it turns out, is an ancient spaceship. After analyzing some Engineer remains, the explorers conclude that they have DNA exactly like that of men; they are actually our ancestors. The explorers are accompanied by an android named David (Michael Fassbender) who has the capacity to understand any language from anywhere. How a man made entity can now know more than men is a philosophical issue that the film does not resolve but David is able to track down a surviving Engineer by reading charts and notations scattered all over the ancient spaceship. The Engineer is slumbering and they awaken him so they can ask him questions with David’s assistance. Instead of being happy to talk to them – as a father might be to a long lost son – the Engineer tries to destroy them. Fortunately, however, a monster is lurking around and swiftly disposes of the Engineer.

The Engineers, it appears, were from another planet a long way off and stopped over here with a cargo of monsters in sealed aluminum containers. They were bound for Earth and the monsters were actually ‘weapons of mass destruction’ with which they were planning to destroy mankind. “The Engineers created us but later wanted to destroy us,” we are told mysteriously. The choice of beasts as ‘weapons of mass destruction’ was an apparently eccentric one because the monsters eventually escaped and killed the Engineers until there was only this one survivor left. It is finally left to Elizabeth Shaw, who has just given birth to a monster, and a resurrected David to locate another Engineer spaceship and journey to the Engineers’ home planet, which is perhaps Heaven allegorized.

Its dazzling visual effects help a little but Prometheus is still unable to conceal the clumsiness of its own conception. There are too many things to be brought together and the film fails by a light-year. What is more interesting, however, is the philosophical issue the film is exploring – which Elizabeth Shaw appears to regard as the most important of philosophical questions: “Where do we come from?” It seems to me that this becomes an important question only if interpreted as involving the mystery of all life. If mankind came from some other planet – LV-589 instead of LV-223 – there would still be a more difficult question to answer which is where the Chimpanzee came from and that could not be answered by “LV-901”; we would be left to then explain the Gorilla and so on.

Prometheus is probably designed to attract a neo-conservative creationist oriented audience, a public which looks at ‘Intelligent Design’ (ID) as a viable alternative to Darwinian evolution. There has apparently been a demand in the US to install ID in school/ college curriculums as a serious discipline. With the full-scale commercialization of education, there is perhaps a movement towards democratization – spreading the general sense that all disciplines are intellectually equal so that those who embark upon PhD programs in ‘Happiness Economics’ feel intellectually equal to those doing theoretical Physics. Darwinian evolution may have glitches but it is still elaborate enough to be a full-fledged discipline – while ID rests on the ‘watchmaker analogy’ (‘If a watch needs a watchmaker, could something as complex as the Universe have come about by accident?’) The fact that a color picture of the inside of a watch is provided alongside the analogy does not make ID more profound. The spectacular visual effects in Prometheus are perhaps like the picture of the watch given alongside the argument whenever ID is propagated. It doesn’t help its intellectual thrust but it can distract you from seeing it for the nonsense that it is.

To conclude, one wonders how the origin of mankind – without attaching it to that of life on Earth – could have assumed so much importance in the mind of any audience. Is the public drawn to Prometheus so self-important that it looks upon Man (i.e. itself) as the endpoint of a process set in motion in another corner of the Universe? Anyone with even a hazy idea of the extent of the Universe – as understood – can only feel insignificant as a human being but here is Mankind being placed at the Universe’s centre – as though this were before Copernicus and Galileo. One reason there was so much resistance to Galileo was that if the Earth was no longer at the centre of the Universe, neither would the Church be. There is perhaps a clue here through which we can understand Prometheus. Ridley Scott is British but the film itself could have only come from Hollywood. Gradually, it seems, the US has begun to see itself as the centre/culmination of creation/ evolution and evidence of this is found even in a film like Terrence Mallick’s The Tree of Life. If ‘Man’ was synonymous with ‘Christianity’ to the Church in Galileo’s time, it could well mean the US to Hollywood in our own time. It was the power exercised by the Church that made it place itself at the centre of the Universe and it can be argued that it is the political/ military/ technological power exercised by the US that makes Hollywood do likewise.