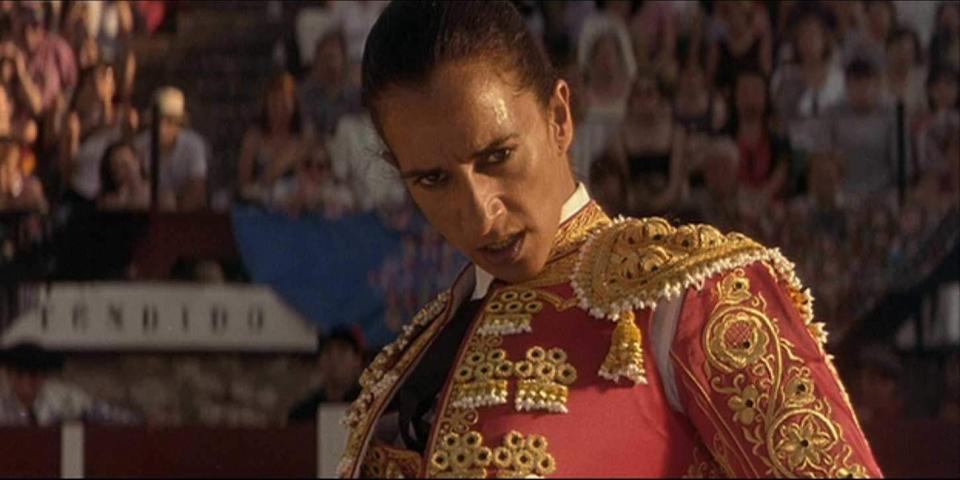 The story of Talk to Her does not need retelling – especially since it has been so widely seen but it is divided into three major segments pertaining to the three key relationships in the narrative. The first segment pertains to the relationship between Benigno, a male hospital nurse and the patient in his care – Alicia who is in a coma after being injured in an accident. The second pertains to the relationship between Lydia, a woman bullfighter, and Marco the journalist who first meets her for an interview. The third relationship is the camaraderie between Marco and Benigno, which concludes with Benigno’s suicide. Since an explicit comparison is made between the two heterosexual relationships in Talk to Her, I should perhaps weave my arguments around them.

The first sign that a comparison is made between the two relationships is seen when Lydia’s dressing for her bullfight is filmed in the same intimate way as Benigno’s dressing of the comatose Lydia. Lydia is grievously injured in the bullfight immediately thereafter and she also relapses into a coma. Lydia and Alicia occupy adjacent rooms in the hospital and both have ‘lovers’ watching over them and this is where the comparison between the two stories becomes explicit.

The relationship between Benigno and Alicia is, at first sight, a simple one of violation and it is for raping Alicia that Benigno is sent to prison. Viewers may be disquieted by Almodovar persuading us that ‘love’ is involved in the relationship because a coma is generally understood to be a brain-dead condition and Benigno answers more readily to the description of a necrophile/rapist than that of a lover. But the question we also need to ask ourselves is whether we are justified in judging Benigno through notions not circumscribed by the actual narrative.

Almodovar suggests that Alicia is conscious in some sense even while in a coma because she recognizes Marco at the end of the film and I propose that we should accept this premise without bringing the legal/moral issues associated with rape from outside the narrative to influence our judgment. Moreover, if in Crime and Punishment we accept Raskolnikov’s brutal killing of a mentally deficient woman as ‘inadvertent’ why can’t we grant the same charity to Benigno when we judge him? Benigno is punished for his act in the film and this should be adequate; we may therefore grant Benigno his humanity and go on to look at what Almodovar may be attempting to say instead of being tied down in our insistence that Talk to Her justifies necrophilia/rape.

When our attention shifts to the actual way in which Almodovar films the sequence in which ‘Benigno’ violates Alicia, we see that the girl’s fecundation follows immediately after the screening of the film ‘Shrinking Lover’. It is as though the imaginative power of ‘Shrinking Lover’ was responsible Alicia’s pregnancy – with Benigno only mediating or playing the role of an agent. Here again, it is only fair that we accept Almodovar’s fiction the way he presents it instead of questioning the ‘plausibility’ of the premise. Benigno understands women and worships them; he has been attending to his mother for 20 years and he has been keeping her beautiful. He is also deeply affected by Lydia’s condition and tells Marco that she needs to be treated better and talked to – although she is in coma.

Women need to be loved and cared for and Lydia apparently dies because she does not get enough love/care. We may therefore say that Almodovar presents Benigno’s feelings towards Alicia as a deep (although one-sided) love. Alicia does not ‘return’ his love but she is affected by it and she comes out of coma when she gives birth to a dead child. Almodovar shows her to be deeply transformed and Benigno has assisted in her transformation although he himself is swept away.

The second of the two love stories involves Marco and Lydia. Lydia has been in love with another bullfighter but they have now broken up and Marco has simply stepped into the void left behind in her life. Lydia is in a distracted state after her break up with her former lover El Nino de Valencia and there is a suggestion that she has is overcome by a death wish that Marco cannot help her overcome. Marco has been talking to her, asking her numerous questions and she agrees to answer them after her fight in the ring, where she unfortunately succumbs to the bull. After her injury Lydia is in coma and Marco is unable to ‘reach’ her. It is, in fact, her former lover El Nino who returns, who draws closer to Lydia and is by her bedside her longer and more often.

We don’t know much about Marco as a lover but his deep empathy for Benigno makes us believe that he is self-effacing in the presence of the woman. He also withdraws discretely from the scene when El Nino makes hisclaim upon Lydia’s heart. It is important for El Nino that Lydia loves him but it is enough for Marco that Lydia is loved. Almodovar uses the two kinds of love to suggest that it is the self-effacing lover who is the more ‘productive’ and that the more ‘masculine’ lover – preoccupied with his love needing reciprocation – is actually of less help. Where Alicia blossoms because of the love/care showered upon her by Benigno, Lydia relapses slowly into death.

The two love stories suggest that the man’s primary purpose – at least in love – is to facilitate a transition in the condition of the woman, to bring her into a condition of acute ‘wakefulness’. Another hint in this regard is perhaps to be found in the silent film ‘Shrinking Lover’ seen by Benigno and described by him to Alicia. Almodovar is generally working in the (broadly speaking) realist mode and the motif of the film within the film allows him to use hyperbole to further the same discourse. The man in ‘Shrinking Lover’ is so self-effacing in the presence of the woman that he erases his own identity to become part of her. Rather than insist that he remain the ‘object of her love’ – as El Nino might have insisted – he becomes inseparable from her sexuality.

It is difficult to define the way Almodovar understands feminine sexuality, but this notion seems to lie at the heart of Talk to Her. Feminine sexuality is perhaps (to Almodovar) a profound kind of sensual awareness that can never ‘serve’ a man, a degree of awareness that can only be worshipped by him. The man in love is best compared to the drone in a beehive – he facilitates a transition in the condition of the queen but he must then fade away.

Talk to Her begins with a stage performance that Benigno and Marco watch, a performance that moves them to tears. The two women on the stage have their eyes closed but they seem to be in the throws of a deep sensual experience. The man appearing on the stage (a man with a ‘sad face’) is only engaged in moving the chairs in their path. Almodovar’s men apparently serve their purpose best if they confine themselves to removing the obstacles in the way of women.