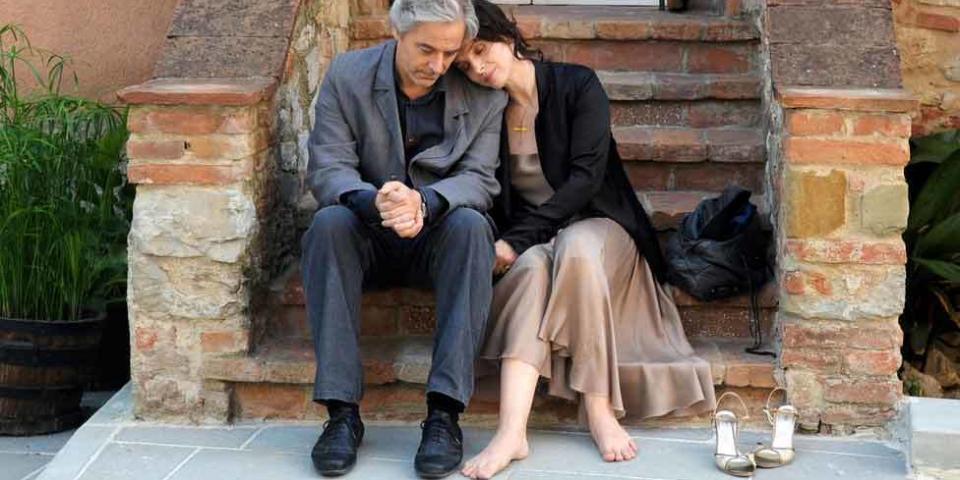 Director: Abbas Kiarostami
Writers: Abbas Kiarostami, Caroline Eliacheff
Stars: Juliette Binoche, William Shimell, Jean-Claude Carrière
Abbas Kiarostami is the best known of Iranian filmmakers and it will not be out of place to assert that he put Iranian cinema on the world map. Yet, a careful viewing of his films raises questions about the validity of his methods. To put is plainly, Kiarostami’s best films erase the distinction between documentary and fiction apparently by having his actors (or non-actors) playing themselves in partly fictional situations.

To illustrate with perhaps his best film Through the Olive Trees (1994), this film deals with a film being made. A bricklayer Hossain (Hossain Rezai) is selected to play the part of a young husband while a girl Tahereh (Tahereh Ladanian) is selected to play his wife and the film within the film deals with the aftermath of an earthquake in Koker. In actual life, Hossain Rezai wishes to marry Tahereh Ladanian but she will not marry him. What Kiarostami appears to do is to talk (on camera) to Hossain Rezai and gather facts about the relationship between him and Tahereh Ladanian, passing it off as the fiction around ‘Hossain’ and ‘Tahereh’.

If the story is illuminating and tells us a great deal about persisting class barriers even in a region devastated by an earthquake, this is not because of the fiction constructed by Kiarostami but because of the actual circumstances of his lead actors. While there is no way in which the actual Hosain Rezai and Tahereh Ladanian could be married, Kiarostami rounds the film off with a bit of fiction in which the two characters are finally brought together. It is likely that neither of the actors Hossain Rezai nor Tahereh Ladanian were aware of the ‘happy ending’ in store for them because the fiction around Hossain and Tahereh is enacted by others impersonating them – and filmed entirely in long shot!

Kiarostami’s films are often ambiguous but their ambiguity is that of fact before it is interpreted rather than an ambivalent response to subject matter. Whatever fiction is constructed around this core of ‘fact’ is simplicity itself – like Hossain and Tahereh coming together eventually despite the social barriers between them. While in his early films, Kiarostami painstakingly documents the ‘fact’ and we learn a huge amount about social conditions, he appears to have become lethargic when he was celebrated internationally and there is a marked depletion in the level of ‘fact’.

In The Wind will carry Us (1999), for instance, we learn hardly anything about the protagonists – an old woman dying in a remote village and a group of Teheran-based technicians who are mysteriously waiting for her death. The ambiguity of the film is like that of a Rorschach inkblot. It can mean everything to all people – which is another way of denying that it means anything at all. Certified Copy (2010) is made in the same vein except that it contains no core of fact because it is set in Europe and entirely fiction – enacted by two European actors.

In Certified Copy, British writer James Miller (William Shimell) is in Tuscany to give a talk about his new book, titled ‘Certified Copy’, which argues that, in art, issues of authenticity are irrelevant, because every reproduction is itself an original; someone who is not told that it is a copy, would respond as though it were an original. A French antiques dealer, whose name is never given (Juliette Binoche), attends the talk with her 11-year-old son in order to have Miller sign the copies she has bought of the book, but has to leave early because her son is hungry.

Miller and the woman later meet at her shop, and Miller suggests they get out and see some of the countryside. The woman drives around aimlessly while he signs the books, and they talk about the book’s subject. They then visit a museum, and the woman gets agitated as she complains about her rebellious son and indifferent husband; Miller appears to defend her son’s behavior. At a cafe Miller steps out to take a phone call, and the person in the cafe, thinking Miller is the woman’s husband, gets into a conversation with her about marriage and about her ‘husband’ specifically. After Miller returns and the two leave the cafe, they start to speak French and English instead of just English, and, more unexpectedly, they now speak as if they truly are a married couple.

At the heart of Certified Copy is evidently a ‘philosophical’ idea – ill thought out – about the distinction between copy and original being nebulous. Miller and the woman begin by enacting the role of husband and wife – just as a copy would begin by ‘enacting’ an original – but soon get so taken up by their roles – as a copy would get immersed in its subject – that they ‘become’ husband and wife. Kiarostami tries to support this banal idea with a whole lot of conversation which is, unfortunately, never more than desultory.

We are accustomed to cinema in which characters discuss philosophical notions but the most successful works in which this happens – Eric Rohmer’s films may be the best examples – use the notions to tell us about the characters rather push the philosophical arguments as ends in themselves. The argument about Pascal between the two long-lost friends in My Night at Maud’s (1969) is not intended to elevate us philosophically. It is intended only to show us two former friends – about whom we are told a great deal – performing for each other and getting a measure of what the other has become, since they last met over a decade back.

Kiarostami has evidently no ability to create characters on his own and, as already suggested, the characters in his best films emerge because of what the lead actors/ relationships intrinsically are rather than the fiction written around them.Certified Copycontains virtually no worthwhile fiction that might have helped construct characters and we learn nothing about the protagonists which might be considered interesting.

Binoche and Shimell (best appreciated for his blow-dried grey hair) are even irksome in the drivel they fling at each other by way of argument – especially because Kiarostami is making it out that what they have to say is inherently of philosophical importance. To give the reader an idea of the level of idiocy, Miller remarks that a tree should be regarded as a work of art because it is so beautiful and no two trees are alike – and the profundity of this remark is duly wondered at by his companion. There is not much more to be said about Certified Copy except that directors who have arrived at a successful formula should be clever enough to quit when they are ahead instead of getting into territory of which they have little or no understanding.