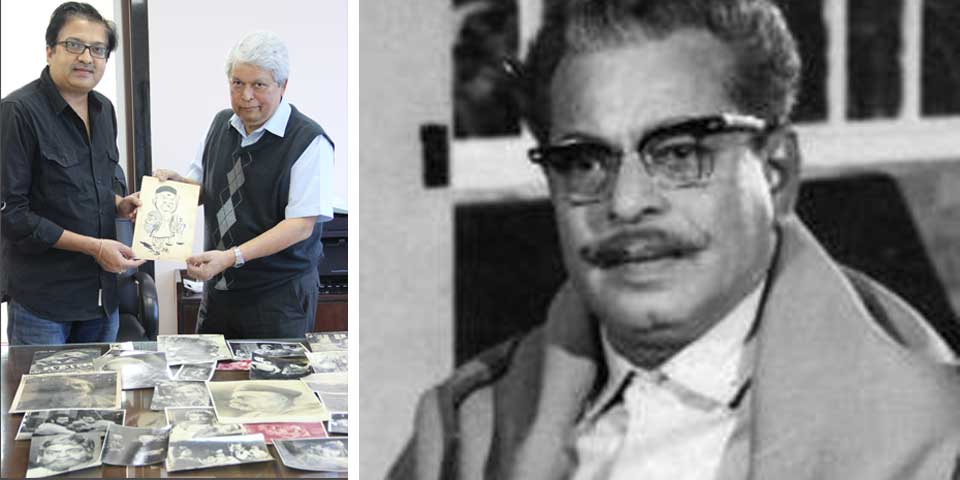 A major highlight of the collection is the original sketch of Gajanan Jagirdar as the protagonist of 1953 film ‘Mahatma’ drawn by veteran cartoonist Bal Thackeray. Jagirdar had played the main lead in the movie written by P.L. Deshpande that was directed by Datta Dharmadhikari. There are several images of Jagirdar from this film along with veteran artist David Abraham and actress Rekha in the collection.

Jagirdar was to play the role of Lokmanya Tilak in a Prabhat Studio production that did not take off. His black and white photograph in the costume and gate-up of Tilak is part of the collection. This iconic image of Jagirdar as Tilak is uncannily similar and has passed off as the original image of Tilak on many occasions.

“We are really delighted to receive this rare collection of photographs of a major artist of Indian Cinema. Having started his career in the iconic Prabhat Studio, Gajanan Jagirdar also served as the first Principal of Film Institute of India during 1961-62. Getting his photographs for preservation is in a way like home coming due to organic connection of these two institutions with NFAI”, said Prakash Magdum.

One of the oldest photographs from the collection is from a 1935 film Asire Havis apart from an image of a 1938 film ‘Meetha Jahar’ where Jagirdar is seen appearing with Naseem Banu.  There are several photographs of Jagirdar in his iconic role as Ramshastri in Prabhat Studio’s film of the same name. He received both critical acclaim as well as immense popularity for this role in the film which was released in 1944. He had received the best actor and best director award for this film by the Bengal Film Journalists Association.

Another stellar role of Jagirdar is that of Mirza in V. Shantaram’s classic bilingual Shejari and Padosi (1941) in Marathi and Hindi respectively is still remembered. There are several photographs of Jagirdar essaying this role in the collection. Jagirdar was one of the first artist from Bombay to helm the direction in Lahore film industry and his film ‘Behram Khan’ (1946) had become tremendously popular. Few stunning photographs of the outdoor shooting of the films are also part of the collection.

“I was in touch with Shri Ashok Jagirdar for past few days and I am really grateful to him for this wonderful gesture of donating these photographs. We will now digitise these photographs so that it can be accessed by researchers of Indian Cinema,” said Prakash Magdum. Incidentally, as part of NFAI’s research programme this year, a monograph on the life and works of Jagirdar is being written by Prof Milind Damle, Head of TV Direction at FTII.