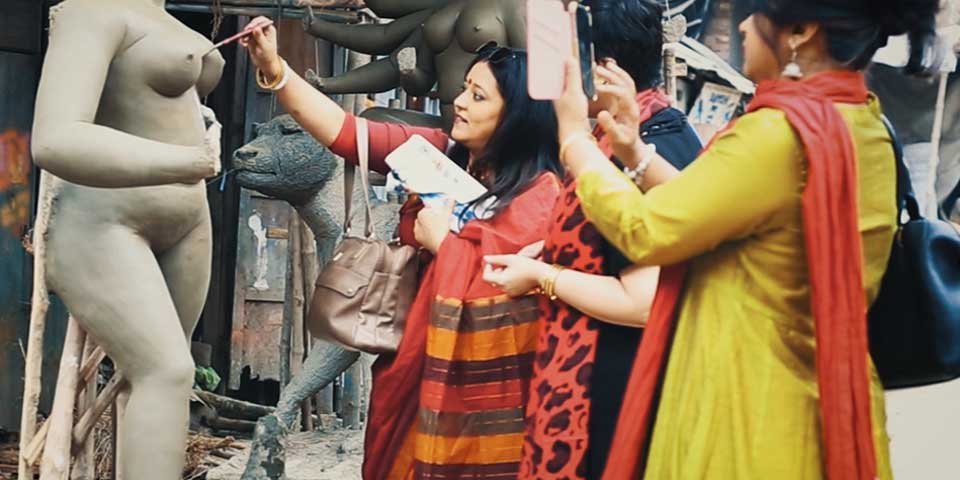 Wide shot of a Kolkata main street. The camera moves from there to the footpath and offers us a feel of a wistful college girl searching for a particular joint. The camera captures a signboard, “Coffee O Kavita,” and then moves forward. A smiling girl appears in the soothing blue-colored door frame, pushes open the glass door, and enters. A couple of other ladies are seated there, apparently waiting for this new entrant. The trio appears to belong to a close-knit group. They commence chatting in the language of poetry and cadence, reminiscing their old, forgotten days. At a point in time, they venture out of the blue-colored restaurant, and explore the greater entity of the city of Kolkata.

The above opening scene compels the audience to follow the three ladies as they journey to discover the unexplained joy and excitement of being and belonging to the city of their old memories, and finding some solace in it. The tapestry of their momentary experiences carry them to their childhood, and offers them the pleasure of discovering their own forgotten selves as well as a sense of much-desired freedom from their suffocating daily lives. Images of flowers in the frames of one of them metaphorically reflect in a subtle way that she of them all is the most content.

The visuals speak. A long-duration, 360-degree pan shot covers the entire Kolkata and allows the audience to feel that all the pain and joy are being concentrated in this city of joy. It must be mentioned though that quite a few of the repetitive shots ought to have been avoided altogether while some others ought to have been shortened. It would have made for a more compact and aesthetically strong film. Furthermore, the excess usage of the fade-out technique, not wholly befitting in terms of the narrative of this film, gives a rather fragmented and episodic feel to the story. 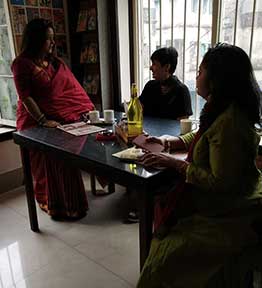 The director, who also wields the baton of a music composer, instills life into some of the scenes with his compositions. In some others, however, the sound of music overpowers the appeal of the images. The visuals are so meaningful that the spoken word portions ought rightly to have been minimized to make the former more vocal. One element that is almost missing is the ambiance track. Way too much of the sound track is reserved for mood-based music. Ideally, the sounds of the actual locales ought to have been captured to breathe realness into the situations.

The opening sequence of Kolkata Cocktail has a tone of a fiction film. Later, it marches forward only with the beautifully captured images. The in-between lines of the poems and the prose selections are creatively narrated by the visual images. Suggestiveness plays its strong role in a poetic narrative and this unique feature is aptly incorporated in the texture of the film. As a result, in the end, despite prose elements, Kolkata Cocktail turns out to be a meaningful ‘Poetry Film’.

The structure of the film stands on the poems and three short stories written by the three ladies that appear in the film. The screenplay writer had built up the three characters based on those prose pieces. One of them is a typical Bangla bohu (housewife) and to establish her status, the director had used elements signifying obstacles, which speaks of the lady living within bindings. While the visuals vividly portray the character, their word (audio) support is but a sort of repetition, and this disturbs the power of the visuals and the cinematic language. A similar narrative is used too for the two other characters.

Though no male counterpart of the ladies is shown in the narrative, one easily feels their presence. The common element on display is the internal yearning that all three ladies carry within them—a world of their own with some free space, fresh air, and fresh sound—after completing all their regular responsibilities and duties. Director Subhayu Bhattacharya draws a vivid picture of the soul of a woman.

In most contemporary discourses, women are analyzed only from two perspectives—that of a woman in a male chauvinist society and that of a ‘feminist’ woman. But Kolkata Cocktail has established a new angle through which one can see that silent woman residing inside all women—she is beyond gender, she is unique, and she is free. This angle of thought makes Kolkata Cocktail meaningful, different, and thought provoking.

In fact, not only woman, but all human beings, desire at some point to return to their old favorite time and space in order to refresh their life and spend some time with a favorite person in a favorite place. Sadly, the fulfillment of this craving isn’t realistically possible for all. Kolkata Cocktail is the depiction of that hidden dream that lives in the minds of all sensitive human beings.

The Voice of Women in the Arts