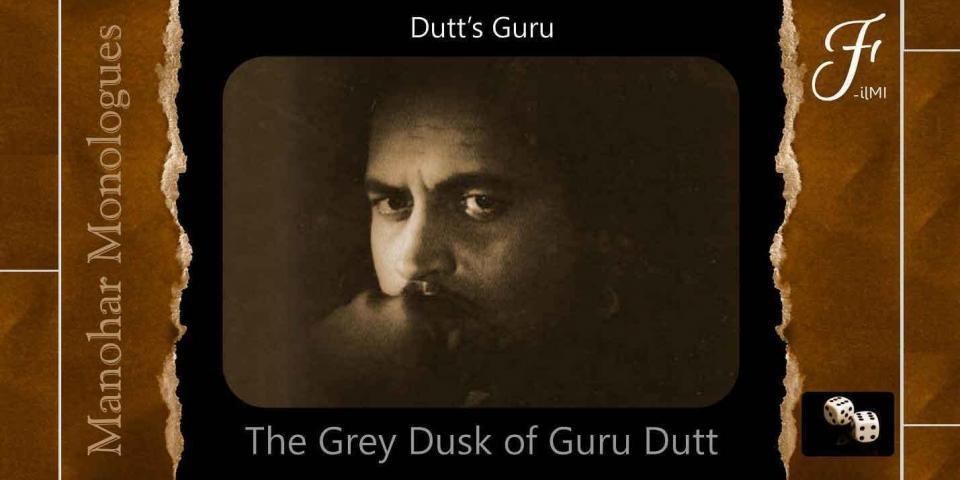 The Grey Dusk of Guru Dutt: a Keep-Alive/Manohar-Monologues music concert

Guru Dutt, with his inborn predilection towards darkness, took an affinity to embrace despair, devastation, despondency and dusky disdain! Dutt’s the way he was!!

Gu means ‘darkness’ and Ru means, ‘one who dispels darkness. The two~syllables word connotes ‘from darkness on to light’! But the life and career of this GuRu saw an unique roundabout turn from a luminous life embracing the gravity of darkness .

The ‘darkness’ (i.e., Gu) that he is seen embracing depicts the Ru dispelling, ironically, the light of his life; totally obliterating the ‘vasant’ of a seasoned career; marking the beginning of a sudden end; terminating the zenith of a zany career to zilch!!!

The Grey Dusk of Guru Dutt—Quite an apt title. It indicates the Grave Delinquency of an otherwise Greatly Dignified and a Genius Director. One is tempted to go into the pyschoanalysis of this complex personality. Very few people have the intellect that is powerful enough to control the mind and its impulses. Those who are emotionally driven are influenced by their environment, societal customs and conditions. They become creatures vulnerable to external influences, bringing out their latent tendencies, lurking within the deep recesses of their being. No amount of disturbance, provocation or temptation can bring out of you that which doesn’t exist in you. The more passive you are, the lower the threshold for resistance to external influences. When checks and balances in society go down, individual checks and balances become vulnerable. The wonkiness shows up depending upon how deep seated it is and how conducive the conditions. There is so much bad in the best of us and so much good in the worst of us. The good or bad comes up when the environment is conducive for what is inherent in us. Because we have multiple tendencies, that tendency for which the environment is compatible, will pop up. The intellect monitors the tendencies and prevents them from coming up whenever the environment is compatible. To be fair, one blemish is not representative of the whole personality. No provocation can make you vindictive if vindictiveness is not there in you. Aggressive nature is a strong intellect controlling a truant mind. Passive nature is slave of mind’s urges… Basically, a good man, trapped in an environment not conducive to his inherent goodness. Left early in search of an environment that would be more suitable for his self expression… It is a supreme fallacy to dream and expect to lead an utopian life in this world, because that’s a direct invitation to disappointment, frustration and despondency. The world doesn’t have it in it, to satisfy all your desires. Even in the best of times, some of your desires will surely remain unfulfilled. काँटों में खिले हैं फूल हमारे रंग भरे अरमानों के नादाँ है जो इन काँटों से दामन को बचाये जाते हैं Those who are pragmatic enough to understand the real nature of world and how it functions, actually save themselves a lot of suffering when their dreams crumble. Success is built upon multiple failures… is the law. Why, how did GD forget the immortal lines of his own song: इक हाथ से देती है ये दुनिया सौ हाथों से ले लेती है…
Raju Makhija

Enduring enigma and mesmerising mystique… Guru Dutt, it seems to me, entertained an utopian worldview of life and letters that gets reflected in his love and longing and also in his body of work. In a way, Guru Dutt, sought to impose this idea through literary intellectualism. And when it didn’t sync well with the then environs of the world around, he listlessly succumbed to cynicism rather uncharitably, much to the dismay and disenchantment of his growing legion of afficionados who were lapping up each and every technique, this Ace Auteur gave to the world. When Guru Dutt bade good bye, he left an imprint of a void that could only be replaced by those artist who through their respective work could lend a blend to the School of Thought that he had laid; A Jaal that he had set for posterity!
Praveish-Vishwanath, Associate professor at GN Khalsa College