The Voice of Women in the Arts

Women today are making their voice heard in all forms of the arts, and in particular, cinema. Older women are taking interest in cinema with the advent of smartphones in Nepal as well as other countries. All have important stories to tell, and social media too is of great help. Equally important, women’s film festivals are offering a platform for the voice of women to be heard on important issues in cinematic as well as textual format. As in the previous years, the place and purpose of women in cinema was a prime topic of discussion at the 2021 edition of the Dhaka International Film festival, taking place totally virtual this year, Jan 16 to 24.

Nisha Shrestha, an actor, filmmaker and festival director of Yala International Film Festival from Nepal was the first to present a keynote paper. She spoke about the Nepalese film goers and how lately 51% of the viewers constitute women. She elaborated how women were not depicted properly in films and the way Nepalese cinema suffered during the Maoist movement from 1996 to 2006. She also touched upon the casting couch that actresses have to face. She then focused on the advent of smartphones and how things are improving. Older generations of women too, she said, are learning how to use technology, and with the easy access of YouTube, are making videos and short films themselves.

Kishwar Kamal, Chairperson of the Dhaka International Film Festival, explained that family support is very important for a woman’s achievement in this field of art. Shamim Akhter, a Bangladeshi filmmaker, added that even during the Lumiere brothers and Salvador Dali’s time, women were in the forefront. Ahmed Muztaba Zamal the festival director, mentioned about the subsidy of the Indian States of Maharashtra and Karnataka that had boosted the respective regional film industries. 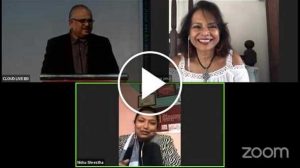 I informed the audience that Karnataka is offering more subsidies to literature-based films, and thereby promoting literature. I also talked about the 2020 Afghani film Hava Maryam, Ayesha, which was awarded the top prize in the Women’s section at the Herat Women’s Film Festival, Afghanistan, when I was in the jury. Angelina Jolie sent a message of support for the film on social media. Meryl Streep too patronises by advocating a Women’s Cinema Fund for American women.

Videos about storytelling and the technical aspect of filmmaking are of huge help to young aspiring filmmakers, many of whom are women. But the telling of stories in the cinematic voice requires funds. In Kerala, a few years ago, the government allocated 3 crores per annum for female filmmakers. Nati Binodini, who defied society to become a famous actress and earn the respect of Ramkrishna Paramhansa way back in 1880 is a classic case. Her success would not have been possible without the backing of a rich admirer. We need the government’s patronage. For the voice of women to be heard, loud and clear, there must be an allocation of funds dedicated for women.