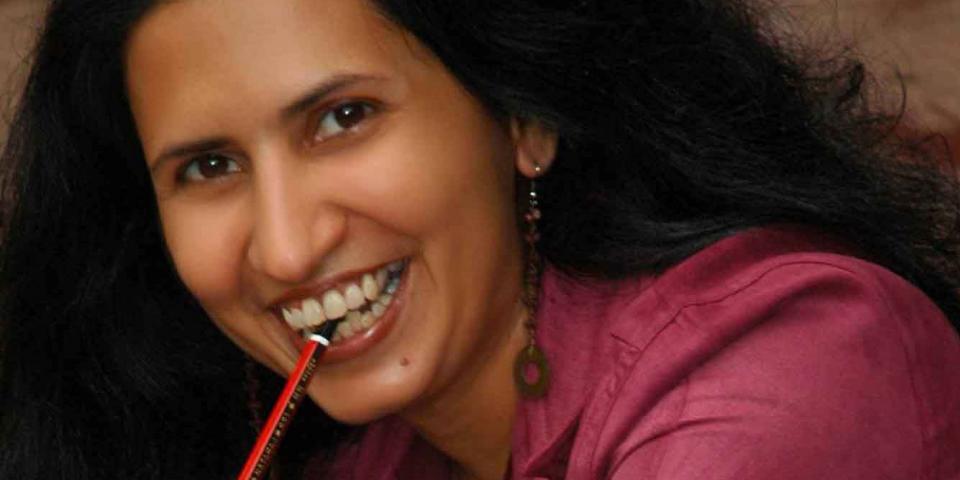 Have you wanted to learn how to script for feature films, TV shows, webseries or short films, but haven’t had the time to attend a long-term course? If so, you may want to be a part of the special new batch of Rajashree’s Weekend Scriptwriting Course, in Mumbai. Rajashree who? Book author, and National Award-winning filmmaker who has taught at FTII and some of the best film schools in Mumbai.

• FTIIan FACULTY: The Weekend Scriptwriting Course is designed & organised by Rajashree, a National Award-winning filmmaker and a bestselling novelist. She has taught at the Film and Television Institute of India, Poona, and some of the best film schools in Bombay. Rajashree’s been a film buff since she was a kid – she once stood in a line for five hours to get tickets for Sholay. She has been working in Bombay after studying direction at the Film and Television Institute of India, Poona. She’s assisted Mansoor Khan and Sanjay Leela Bhansali. A film she wrote and directed, The Rebel, was screened at many film festivals, and won the National Award and the Golden Ten Award. Her critically acclaimed first book, Trust Me, is a lighthearted romantic comedy set in the Bombay film industry. According to figures given by The Times of India and The Sunday Telegraph, Trust Me is the biggest-selling Indian chick lit novel.

• CERTIFICATE: You would be given a certificate at the successful completion of the course.
​​
• WEEKEND CLASSES: So that you can follow your dreams without letting go of your responsibilities, Rajashree’s weekend scriptwriting course is on Saturday 8th April and Sunday 9th April. ​
​​
• DEMAND FOR FRESH VOICES: The Indian​ web,​ film and television industry is looking for fresh voices. With the success of ‘different’ kinds of online content, films and TV programs, there is a demand for out-of-the-box thinking, for writers and for directors who understand the art and craft of film-making. It’s a great time to enter the field.
​
• VALUE FOR MONEY: The fees of Rs 1,900 (all-inclusive, non-refundable) cover the classes, refreshments during classes, a directory of the Film & TV industry and study material like books and cds. A donation of 10% from every student’s fees would be given to an NGO that’s working for the underprivileged.
​​
• JOIN-WITH-YOUR-FRIENDS DISCOUNT: If you join the weekend scriptwriting course with a friend, both you (who are the introducer) and your friend who you are introducing to us would get a cashback/ discount of Rs 400 on your fees​.​

“Fulfill your celluloid dreams… Did you harbour a dream of becoming a filmmaker, but end up pursuing an entirely different profession? Are you one of those who buried their dreams, while trying to realise more pressing responsibilities? Or would you like to broaden your experience with learning how things are done in the film industry? There might be good news in store, for such readers… sign up for a course conducted by National Award-winning filmmaker, Rajashree.”

Mid Day
“Rajashree is a teacher par excellence. She can make the most difficult topics comprehensible. She is very patient and understanding, yet strict. Her classes are ideal for students who want to learn hands-on filmmaking without forsaking their responsibilities towards their work or studies. Its well-designed syllabus is practical-oriented; the theory goes into developing a good understanding of the fundamentals of story-telling and filmmaking. The course requires the students to write and direct a short film, which may be used as a showreel and can also be submitted to film festivals. Films made by the previous batches have been shown at the International Film Festival of India, Goa, the most esteemed film festival in the country.”

Complete TV
“The next best thing to a course at FTII.”
Bharati Hemmady, Former student
“Rajashree ma’am taught me how to create 3-dimensional characters, structure the plot, and direct actors, which helped me tremendously when I was writing and directing my movie.”

Rakesh Mehta, Former student whose debut feature film, ‘Khuda Kushi’ bagged 3 international awards.
“Rajashree ma’am is like the energy drink Red Bull! She motivates you to spring into action and pushes you to deliver beyond your limits.”